Sabrina Ratté: “The decision from the Sobey Art Foundation to change the nature of the prize showed a great consciousness of the difficult times we are all going through.” | Nuée, 2020.

Two Concordians — Adam Basanta (MA 13) Sabrina Ratté (BFA 05, MFA 12) — are among 25 artists sharing one of the most distinguished awards in Canadian art.

Last month, the Sobey Art Foundation and the National Gallery of Canada made the unprecedented decision to give $25,000 to each of the longlisted artists for the 2020 Sobey Art Award. Normally, the winner for Canada’s largest prize for artists under 40 would receive $100,000 and the four shortlisted candidates would each be awarded $25,000.

‘This award was such a blessing’

With the country at a standstill from the global COVID-19 pandemic, these are not normal times.

“These extraordinary, historic and challenging circumstances will have a profound impact on the livelihoods and practices of artists across Canada and around the world,” said Rob Sobey, foundation chair, in a statement released April 15.

“As we all adjust to the changes in our everyday lives, we recognize how artists and their art can bring us together. Our sincere wish is that this year’s longlist artists will utilize this additional support to continue to do so.”

The decision was welcomed in the art world, receiving plaudits from many artists, critics and culture workers on social media and in the press.

“Everybody was amazed by this decision,” Ratté says.

“These tough times bring a lot of uncertainties for everyone. As an artist, my income depends on many events, travels or commissions, which have all been cancelled for the next several months. This award was such a blessing! It definitely helps me use this time at home to focus on my art with much less worry.” 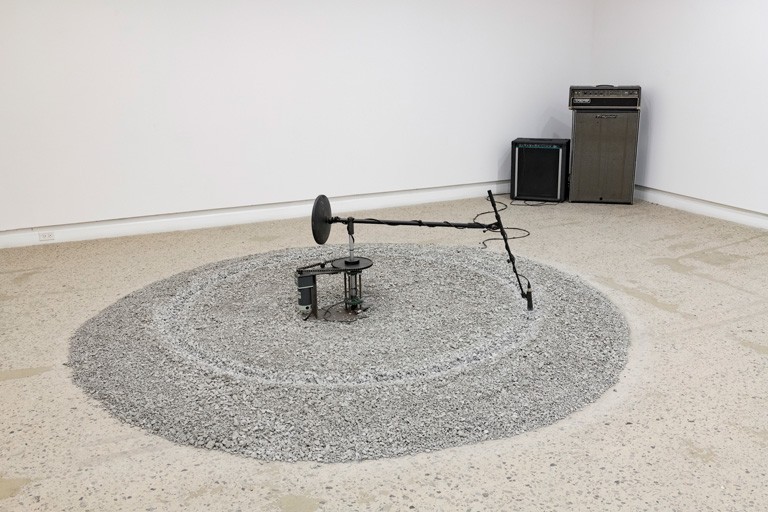 A Large Inscription, 2019, by Adam Basanta. | Photo by Paul Litherand.

‘This decision encourages a sense of solidarity’

Multimedia artist and composer Adam Basanta, who taught as a part-time professor in Concordia’s departments of Music and Design and Computation Arts between 2013 and 2015, was also longlisted in 2018. He is a sound artist and composer who graduated from the university’s Individualized Program.

His art practice incorporates elements of sculpture and technology into large-scale installations.

“It is always an honour to be nominated and to be considered in such company," Basanta says.

"This year, with the economic impact of COVID-19 and the subsequent change in format, the prize will allow me to continue researching and producing upcoming projects, which would not be possible otherwise,” he adds.

“This decision encourages a sense of solidarity, since by sharing the prize outside of the competition model we are actually supporting one another’s ability to create in otherwise difficult times.”

In 2016, Basanta’s artwork “Curtain (white)” had visitors surrounded by white noise as they made their way to a “curtain” made of 240 pairs of earbuds. The installation measured three metres in length and was presented around the world.

Basanta’s recent composition work includes a commissioned piece for Montreal’s Quator Bozzini String Quartet, which was performed in both Montreal and Utrecht, Netherlands, in fall 2019.

‘This is helping so many artists’

Her work focuses on the creation of architectural environments, abstract compositions and landscapes. She investigates the unconscious influence of digital and physical spaces, mixing analogue technologies, photography and 3D animation.

“First, I felt extremely grateful for this award, which represents such an important recognition and support from the community. It is a huge encouragement to keep on going with my work,” she says.

“The decision from the Sobey Art Foundation to change the nature of the prize so that all the nominees can benefit from a more important sum of money was very generous and it showed a great consciousness of the difficult times we are all going through. This is helping so many artists — I can’t be thankful enough!”

Ratté was longlisted for the Sobey Art Award in 2019 as well. Over the past year, she has had solo exhibitions in Paris and Tel Aviv and exhibited in two-person shows in Tokyo and Montreal.

Find out more about the Sobey Art Award and Concordia’s Faculty of Fine Arts.