View the latest graduate business research on a broad range of topics on Nov. 15

On November 15, 2018, the atrium of the John Molson Building will become a microcosm of the Montreal business community. Established CEOs, managers, media people, alumni and business owners from across the island will come to judge and be onlookers at the 10th Annual Graduate Research Exposition (AGRE).

The open-air forum, which the public can attend, challenges John Molson School of Business (JMSB) PhD and MSc students to translate the practical significance of their research through an appealing and easy-to-grasp poster. Judges then grade the posters, with researchers gaining points for content, aesthetics and communication.

“The wonderful thing about the poster format is that it forces students to be both succinct and vivid at the same time. They must think critically about images and what specific content highlights the importance of their research,” says Linda Dyer, chair and professor in the Department of Management and one of the exposition’s coordinators.

Dyer adds that oftentimes graduate students get so caught up in their own research — its jargon and complexities — that they lose sight of the bigger picture.

“The poster format brings back that big picture and allows them to build connections between their research and practice. It also gives them a chance to talk about their work using more easily accessible language.”

This year, 27 graduate students will battle it out for cash prizes ranging from $200 to $1,400. In total, 10 awards will be given out for top-rated posters as well as for runners-up, honourable mentions, best communicators and popular choice.

The students represent all five JMSB departments. From research on how much is too much to disclose during an interview, to the rise of veganism and moralized consumption, to the relationship between cultural identity and branding, the topics presented at the expo will be as diverse as the students themselves.

“Over the last decade this event has become widely established, and we see judges ask to come back year after year,” Dyer says.

“It’s a chance for the larger community to check out cutting-edge research and to network not only with students but with other businesspeople in the city. It also permits students to interact with one another and for faculty to see what kinds of research their colleagues are doing.” 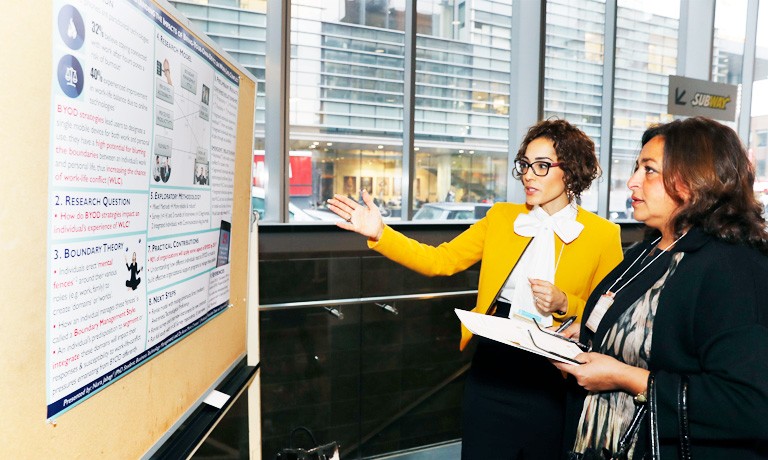 Ayanna Durant, a graduate recruitment associate with JMSB, notes that the event is also a wonderful opportunity for undergraduate students to talk to those who’ve pursued higher studies in their field.

“My role, as a recruiter, is to connect with AGRE participants and learn about their background and their experience in the program up to that point,” Durant explains.

“It’s quite clear that undergraduates who are curious about pursuing graduate studies can really benefit from this event.”

Projects will be on display throughout the day, and students will be on hand from 4 to 5:30 p.m. to answer questions from inquisitive passers-by.

All students who visit the expo can cast a vote for the Popular Choice Award.