Beginning Sept. 26, new slate of the University of the Streets Café tackles urban development and gentrification
|
By Daniel Bartlett

Eight-dollar lattes and art galleries often dominate our understanding of gentrification and its effects on neighbourhoods. But for Alex Megelas, programs and communications coordinator of Concordia’s Office of Community Engagement, the displacement of low-income families and small businesses is much more complex.

“Meaningful exchanges on gentrification benefit from some amount of specificity,” Megelas says.

“We can’t really talk about smart cities — or cities for all — without recognizing that there is a contentious set of socio-economic issues underlying those contexts.”

This fall, University of the Streets Café is tackling these concerns head-on with its newest slate of public conversations, Just Cities. Each session will seek to widen participants’ perspectives on urban development.

The program kicks off September 26 with a discussion on building local solidarity movements. Other conversations will address how public art can adversely affect cities, whether wealthy individuals should determine the look and feel of a neighbourhood, and what responsibility a community has for youth in care.

“Is there a way for us to talk about coordinated and technologically-reliant cities while also committing to justice and equality?” Megelas asks.

Charmaine Lyn, senior director of Concordia’s Office of Community Engagement, says grappling with these questions should build upon rich and complex community narratives.

“There’s a deep and plural landscape of knowledge and lived experience in our cities,” she explains.

“The raison-d’être of our conversations is to recognize community-held knowledge and leadership. We are there to listen, first and foremost, and to recognize that teaching and learning is everywhere, in everyone.” 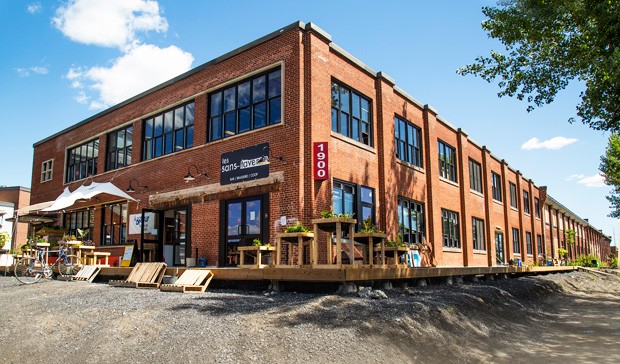 Megelas chose Head & Hands and Bâtiment 7 to split the six-session program because both are located in neighbourhoods that are undergoing significant shifts. “I’m really interested in seeing how our presence in the two sites might facilitate the kinds of discussions that we see coming up,” he says.

“By returning to neighbourhoods over the course of a season, we develop a richer and more complex understanding of what they’re all about. It helps us to establish relationships, and it helps to keep us relevant and accountable.”

Why NOT in My Backyard? How can we build solidarity movements in our neighborhoods

This season launch at Head & Hands will feature guests Jessica Quijano from the Native Women’s Shelter and Fred Burrill, a community organizer against gentrification and a doctoral student in the Department of History at Concordia.

The conversation will attempt to consider the role of harm-reduction strategies in ensuring that vulnerable populations are integrated into their communities and whether the concerns of the wealthy should be allowed to predominate in urban planning.

Located in the western part of Montreal’s Notre-Dame-de-Grâce (NDG) district, Head & Hands emerged out of the city’s free clinic movement in the 1970s. The non-profit organization continues to provide youth with medical, legal, street-outreach and counselling services.

Public Art, Private Spaces: How do art and artists change our cities for the worse?

University of the Streets Café will head down to Pointe-Saint-Charles for a conversation which aims to look at the impact of art on neighborhoods.

In the context of urban development what does artistic expression contribute to, and to what extent are artists able to mitigate the changes they bring about?

Two guests will be on hand to help foster the exchange: Dayna Danger whose practice “questions the line between empowerment and objectification,” and Guillaume Adjutor Provost, a Montreal-based artist and researcher interested in the nature of artistic commissions.

Bâtiment 7, the host site for this conversation, opened its doors in May. Located on former CN lands at the neighbourhood’s southernmost tip, this heritage industrial site is emerging as a unique, collectively governed autonomous community initiative.

It is home to 13 locally-led solidarity cooperatives, in a neighbourhood that has for many generations been a crucible for citizen-led engagement.

Megelas says housing in NDG and Pointe-Saint-Charles has changed dramatically over the past decade. “These parallels are important to note given that historically these are two neighbourhoods that held unique cultures and whose residents are now feeling the pinch,” Megelas says.

“I used to live in Pointe-Saint-Charles and the neighbourhood looks nothing like what it did four, three or even two years ago.”

This season’s discussions reinforce a number of efforts by Concordia to understand what it means to hold an institutional responsibility in the context of urban living. Megelas points to the Institute for Urban Futures and the Centre for Oral History and Digital Storytelling as two examples of groups that reflect on the university’s relationship with Montreal.

He measures the success of a public conversation in the minutes following the event, when participants choose to mingle rather than head straight home.

“It’s a moment that we no longer control,” Megelas says. “It falls within the realm of collective citizenship and the capacity for folks to spontaneously create something out of a shared reflection.”

Find out more about Concordia’s upcoming University of the Streets Café events.