Steve Shih: "Our lab is using this system to understand the mechanisms of cancer."

Steve Shih is a step closer to realizing his goal of building highly affordable, portable labs to test for diseases and develop renewable energies on the spot.

“If you think you have strep throat, your doctor would be able to do the test right there in the office,” says Shih, assistant professor of electrical and biomedical engineering at the Faculty of Engineering and Computer Science.

“If you’re trying to produce fuel by breaking down biomass — like grass, say — our device will help determine which proteins are the most resilient in biomass degradation.”

Shih’s new invention is an image-based feedback and analysis system, which improves the functionality of digital microfluidics (DMF) technology.

His research findings were published in the journal Lab on a Chip in August, 2017. The article was co-authored with Shih’s students, Philippe Q. N. Vo, Mathieu C. Husser, Fatemeh Ahmadi and Hugo Sinha. 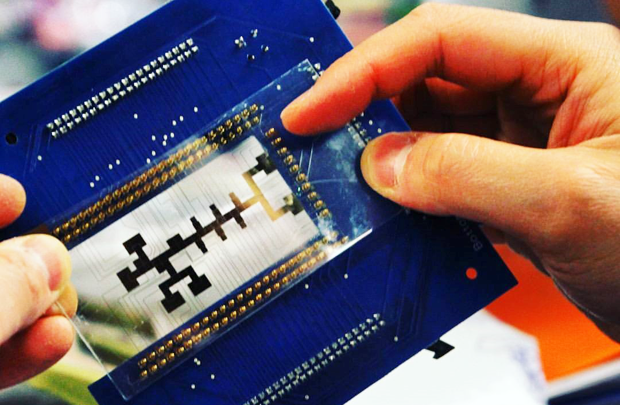 Digital microfluidics: how it works

Normally the size of a credit card, they are used to integrate several laboratory functions onto a single chip as small as a few nanolitres of fluid.

“By manipulating very small volumes of fluid on electrodes using voltage, we have a powerful tool that allows us to perform several medical tests in one shot, and address challenging problems in health care,” says the founder of the Shih Microfluidics Laboratory.

Our device will radically speed up lab analysis and research.

Cancer research is one example of how DMF technology can be applied. Researchers can take a sample of cells — usually a tiny droplet of cells that researchers believe are going to help us understand cancer better — and put them directly on the DMF device with an array of electrodes.

“Trying to obtain cells related to diseases like cancer are very precious. It's difficult to grab lots of them, so working at this small scale really helps us,” says Shih. “We can put the cells on the DMF device, then interrogate or mix these cells with drugs in liquid form to determine the effects of the drug on the cancer cells— thus, the necessity to be able to move liquids.”

A camera that detects movement failure

Sometimes, however, the droplets don’t move. Previously, there was no online way to track when the droplets didn’t respond to the electrodes. Shih’s new system solves that problem, charting the movement of many droplets at once.

“Our system consists of integrating open-source electronics with a camera and a off-the-shelf lens for acquisition of the images that will be used to detect droplets on the device,” says Shih.

“We also created an algorithm that uses a Hough transform to detect a variety of droplet sizes and to detect singular droplet dispensing and movement failures on the device. Then we can reapply the voltage, if desired.”

“Our lab is using this system to understand the mechanisms of cancer -- that is when we know we have really made a difference” Shih says.

Listen to Shih describe his work on Concordia's 2067 podcast series.

Learn more about the Shih Microfluidics Laboratory at Concordia.