The former chair of Concordia’s Department of Classics, Modern Languages and Linguistics continues to research and travel. Her life’s work was recognized in 2017, when the Universidad Autonoma de Santo Domingo (UASD) awarded her an honorary professorship. 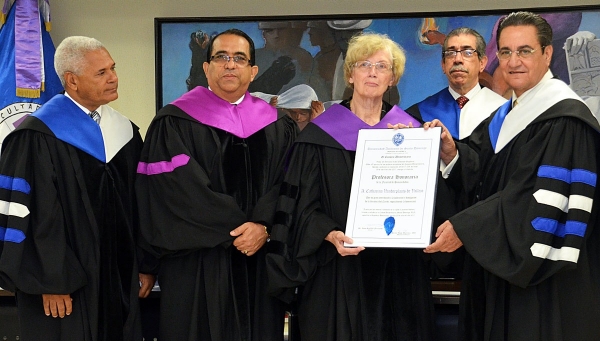 “It’s a wonderful honour to be recognized with an academic award,” says Vallejo, whose research and teaching focused on 19th-century Spanish-American women’s issues and writing.

Located in Santo Domingo, Dominican Republic, UASD was the first established university in the Americas, founded in 1538. It retains a highly regarded academic profile today.

Iván Grullón Fernández, rector of UASD, conferred the award in recognition of Vallejo’s “rare talent and outstanding contribution to the literature of the Dominican Republic and the Caribbean. She put a prominent female presence on the literary map of the Spanish Caribbean — rescuing from obscurity a rich tradition of women writers of Cuba, Santo Domingo, Puerto Rico and Colombia.”

Vallejo was born and raised in Holland. Her husband of 50 years is Dominican — and a graduate of the UASD’s Faculty of Medicine. His home country became her first research focus. In her early career, she studied 19th-century writers of the Dominican Republic.

“It was said there were no women writers in the Dominican Republic, yet through my research, I found many,” says Vallejo. Her digging — including through old newspapers, some dating back to the 1840s — revealed serialized novels, poems and never-published manuscripts by female writers.

Up until the 1980s, these writers were completely unknown, either out of print or never published. So Vallejo took it upon herself to get them published.

For example, one 1876 Colombian novel by Soledad Acosta de Samper titled Una holandesa en America (A Dutch Woman in America) — its attraction for Vallejo is obvious — had never before been published in Colombia, and quickly sold out.

“Nobody knew about these talented women writers. I ended up doing the same thing in Cuba and Puerto Rico. Today, especially as library materials are becoming digitized and easier to search, people are finding 19th-century women writers pretty much all over Latin America.”

Her research on women writers has taken her to the Caribbean and Central America regularly through the years. 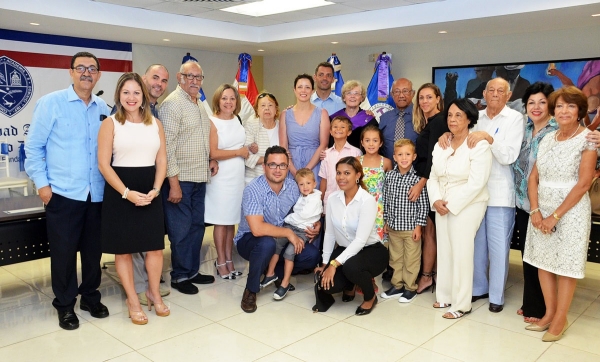 A prolific researcher, Vallejo found as much joy and satisfaction in teaching. “I miss being around young people — their curiosity and enthusiasm. Things they wanted to know ignited my own curiosity and became the impulse for some of my research projects.”

Her students appreciated Vallejo in return. “I love this class! It’s clear that she loves what she does, and that makes her classes way more interesting. You learn a lot through her own personal experience,” says one young student in an anonymous review.

Vallejo immigrated to Canada as a teen and learned Spanish during her undergraduate years at Sir George Williams University, one of Concordia’s founding institutions.

“Without Sir George Williams University, I would be nowhere. I had to work during my studies, and it was the only institution that gave me an opportunity because it offered part-time classes in the evening. As a young student, I was fascinated by everything.”

Upon graduation with a bachelor’s degree in French and Spanish, she began teaching part-time at Concordia. Sharing ideas with her students nurtured her curiosity and led her to pursue graduate studies at McGill University.

After seven years of part-time study while raising four children, she received her master’s degree in contemporary Latin American literature in 1976. She earned a PhD from the Université de Montréal in 1991.

Juggling her roles as a mother, university professor and graduate student, Vallejo was an inspiration to many of her young female students.

Celebrating with the family

Vallejo’s husband, three children and their spouses, and four grandchildren were all present at the conferral ceremony in Santo Domingo on July 25, 2017.

In her speech that day, Vallejo mentioned how honoured she was to receive the award from UASD — which was the first university in the Americas as well as where her husband and many of his relatives earned their degrees from.

As one of only a few female recipients of the UASD’s honorary professorship, Vallejo continues to set an example for women in academia in Latin America.

Vallejo has edited and published several books as well as dozens of articles, book chapters and conference papers.

She is currently exploring the career of a Spanish-born woman who worked as a professional journalist in Cuba. She published a weekly column from 1845 to 1873 and 14 novels before 1855 — both achievements possibly firsts for a woman in Latin America, and a writer still completely unknown.