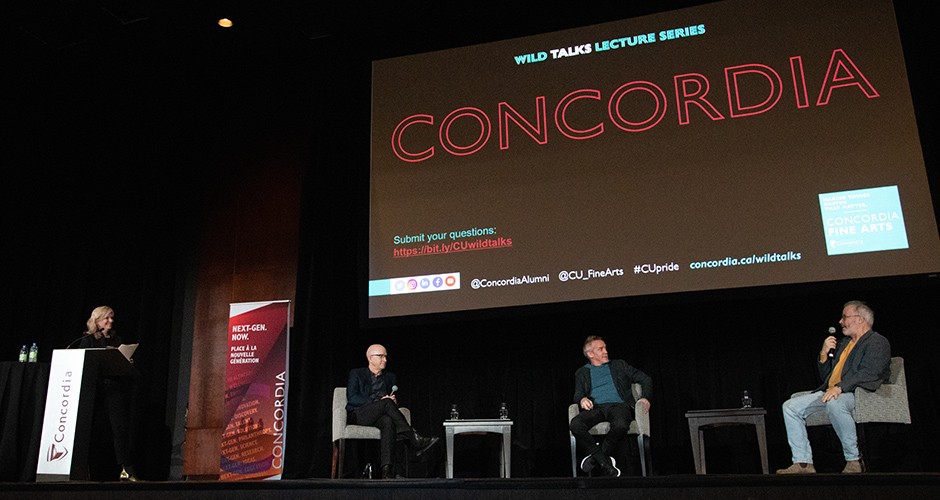 Close to 300 audience members took in the live event at Montreal’s Théâtre Symposia, in accordance with COVID-19 public health protocols.

“Isn’t it great to be able to have an event in person again?” said President Carr, to boisterous applause.

President Carr then announced plans to significantly expand the Film Production program at the Mel Hoppenheim School of Cinema to help meet the personnel needs of Montreal’s film industry.

“On an annual basis, the Mel Hoppenheim School of Cinema, the largest cinema school in the country, gets 700 student applicants but only has space for 70. Our objective is to triple that number in time for Concordia’s 50th anniversary in 2024.”

Ollivier, who successfully ran alongside Mayor Valérie Plante in Montreal’s recent municipal elections, spoke with pride about the city’s creative and cultural capital: “It’s very important economically but also socially. It reflects our evolution and diversity, encourages exchanges and contributes to our intellectual richness.”

‘Choosing a film is choosing your lifestyle’ 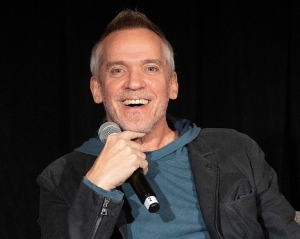 Vallée, whose body of work includes the HBO drama Sharp Objects and the acclaimed films C.R.A.Z.Y., Café de Flore, The Young Victoria and Wild, was joined in conversation by cinematographer Yves Bélanger, BFA 84.

The talk, moderated by Tim Southam, a past president of the Directors Guild of Canada, concentrated primarily on technique, as illustrated by clips taken from such Vallée and Bélanger projects as 2013’s Dallas Buyers Club, which netted Academy Awards for actors Matthew McConaughey and Jared Leto, 2015’s Demolition, and Big Little Lies, for which Vallée won a Primetime Emmy Award for Outstanding Directing in 2017.

“Understand, we’re not just here to learn from these two gentlemen, but to steal from them,” joked Southam.

The hour-long discussion included a number of process-focused, behind-the-scenes anecdotes for the benefit of the students in attendance. Select cinema students also had the opportunity to meet with Vallée in person at Concordia this week. 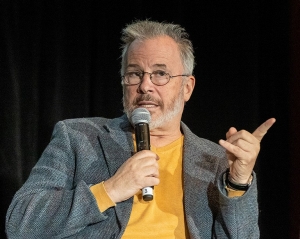 Bélanger urged future filmmakers in the audience not to be afraid to shoot continuously with handheld cameras and a minimum of equipment, a style Vallée has become known for.

“I was afraid actors would think it was weird, but they love it. Everybody becomes more free.”

In response to an audience question about how he chooses his projects, Vallée remarked that “choosing a film is choosing your lifestyle.”

“I always want to react to the script. You want to wake up happy to serve the story because ultimately, you will be engaged with that story for two or three years of your life.”

Both Bélanger and Vallée stressed the importance of sustained government support for the film industry. Added Vallée: “I’m very optimistic about the future of cinema in Quebec and Canada.”

Vallée also shared an exclusive update about his next big project: a feature film about John Lennon and Yoko Ono.

“I wrote the script during the pandemic and delivered the draft on October 9 — which I only realized after is John Lennon’s birth date.” 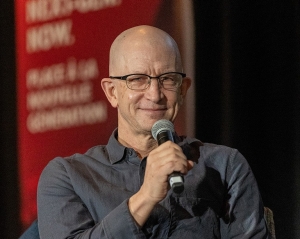 “Understand, we’re not just here to learn from these two gentlemen, but to steal from them,” joked Tim Southam.

The Faculty of Fine Arts launched Wild Talks in 2017. Named in honour of Catherine Wild, BFA 77, former dean and a Department of Studio Arts faculty member, the annual lecture and seminar program has featured past guests like artists Mark Dion and Michael Rakowitz and set designer Christine Jones, BFA 89.

“Catherine Wild’s sound guidance has been widely recognized by many friends, colleagues and admirers,” said Annie Gérin. “We thank her friend, Erin Hogg, a generous and loyal supporter of the Faculty of Fine Arts for many years, for providing us with the gift of the Wild Talks.”