Filmmaker Deepa Mehta sets out on journeys of hope and change

Deepa Mehta's 2020 film, Funny Boy, is about a gay Tamil boy in Sri Lanka coming to terms with his sexuality in a country where homosexuality is illegal.

As an award-winning screenwriter, director and storyteller, Deepa Mehta, DLitt 13, has taken her audience on emotional and meditative journeys throughout her storied career.

Driven by curiosity, she quotes American philosopher and gender theorist Judith Butler to express her passion: “How else can we imagine living together without this ability to see beyond where we are?”

Mehta’s work has consistently sought to see beyond, delving into tradition and values, offering hope and the promise of change. Among her cinematic credits is her acclaimed trilogy Fire, Earth, and Water, an exploration of Indian life; her adaptation of Salman Rushdie’s Midnight’s Children; and Funny Boy, her 2020 film about a gay Tamil boy in Sri Lanka coming to terms with his sexuality in a country where homosexuality is illegal.

“Each film, series or production I have done has taken me on a journey,” Mehta says. “Each one is very different from the last. It’s very hard to compare these journeys — since each one has taught me something invaluable and has a special place in my life.”

‘Concordia holds a place close to my heart’ 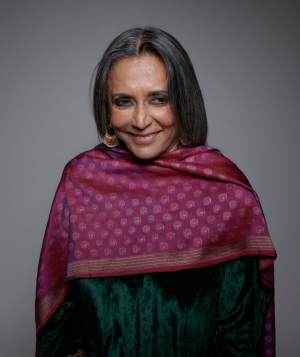 “Be fearless in what you want to do. Commit to it — and that means asking questions about areas in which you are not an expert," says Mehta. | Photo: Janick Laurent

The Indian-born, Toronto-based filmmaker’s own journey led her to Concordia in 2013, where she was conferred an Honorary Doctor of Letters. Rae Staseson, former chair of the Department of Communication Studies, who delivered Mehta’s citation at the convocation ceremony, said: “Her work crosses cultures, countries and class. It is intergenerational, inspiring, provocative and deeply humanist to the core.”

Mehta is proud of the recognition. “Concordia holds a place very close to my heart,” she says. “It was a great honour to receive my Doctor of Letters, and it’s definitely a moment I look back on with fondness and pride.

“Concordia, in many ways, has been a frontrunner in absorbing different cultures,” she says, naming graduate Arshad Khan, BFA 12, as an example of one of Canada’s foremost emerging filmmakers. “His film Abu blew me away.”

Water was nominated in 2007 for an Oscar in the Best International Film category. In May 2012, Mehta received the Governor General's Performing Arts Award for Lifetime Artistic Achievement — Canada's highest honour in the performing arts — and in 2019, was presented with the Lifetime Achievement Award from the Academy of Canadian Cinema and Television for her impact on Canada’s entertainment industry.

Despite the pandemic, Mehta forges ahead on her projects. One advantage, she says, is that being in isolation forces everyone to focus on making a film the best it can possibly be. Post-production on Funny Boy took place almost entirely in lockdown.

Mehta sees so much diverse talent and potential for the film industry in Canada, and although there a lot of progress has been made, she maintains that Canada still has a long way to go. Instead of advice to future filmmakers, she offers words of encouragement: “Be fearless in what you want to do. Commit to it — and that means asking questions about areas in which you are not an expert. Vulnerability is a great strength.”