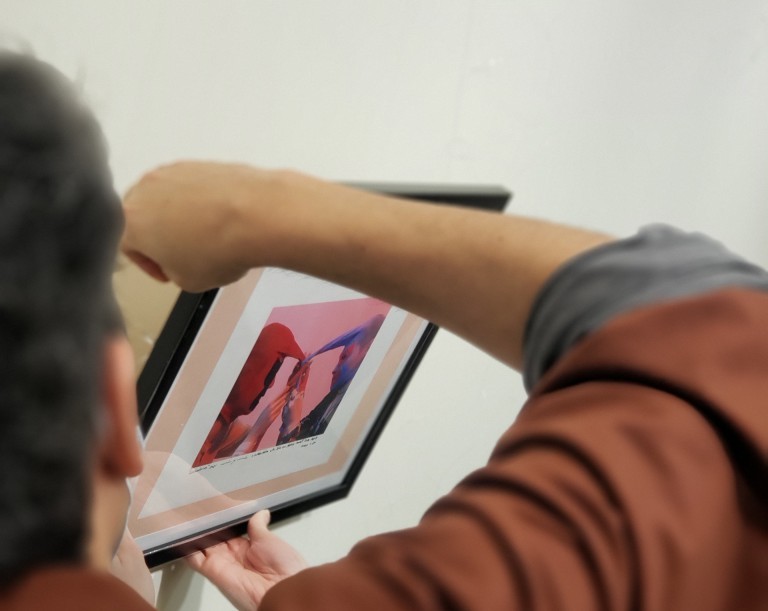 An exhibition titled FOSTER DIALOGUE opens today at Concordia with a vernissage and art-making event. It’s a collaborative effort among artists in response to the attack on Ukraine.

The student-led effort is an international collaboration between 32 artists and art educators from 10 different countries who seek to raise awareness for those affected by the situation in Ukraine and, ultimately, stop the war.

The aim of the exhibition is to have artists of different origins, who speak different languages and create different kinds of art, unite in an effort to “foster dialogue.”

'Welcome to the conversation'

The event’s organizers hope the exhibition will encourage reflection on the value of dialogue in conflict resolution. Their vision is rooted in the belief that dialogue builds goodwill, and solutions to most problems can be found through mutually respectful discussion.

“The message is very simple: ‘welcome to the conversation’,” says Kovalevska. “Those who joined FOSTER DIALOGUE not only believe in, but trust the power of mutually respectful conversation to guide our lives in society, solve conflicts, and defy borders, as well as political, cultural, and other differences. Differences are good. They start discussions. The wide scope of subjects and geographies in the exhibition proves that point.”

The Department of Art Education reached out to Kovalevska and fellow Ukrainian ARTE student Olena Zamkovaya following Russia’s invasion of Ukraine, and Kovalevska says they started a conversation about how they could respond.

“It was a natural reaction, a way to cope with the shock and despair of the moment, the only something that made sense in the senseless event of the war,” says Kovalevska.

“As bullets and missiles rained on the faraway land of Ukraine, we held on to the saving grace of respectful dialogue, even if each of us was being affected by the events differently. The intensity of this unfolding turmoil led to our collective response to the violence and injustice — the international art project FOSTER DIALOGUE.”

'The project changed me'

Zamkovaya made the brave decision to leave for Europe where she is still voluntarily providing humanitarian aid to refugees at the Hungarian-Ukrainian border. Meanwhile, Kovalevska rallied the global community of art educators to encourage artistic contributions to their cause.

“Olena’s remarkable journey is filled with stories of hope, empathy, unity, humanity, and goodwill,” says Kovalevska. “It became the heart of the project.”

Kovalevska says that working on the exhibition was very personal for her, as it allowed her to experience healing and reconciliation through dialogue around a painful and dividing subject that she cannot address with members of her own family in Crimea, due to their differing views.

“The project changed me. I became a better person — more understanding and attentive to the universes of others’ opinions, views, and experiences,” says Kovalevska.

“It was also marvelous to witness such an unprecedented unity and communal response to the subject — all the empathy that people expressed for my country. It was and is an example of people truly coming together in support of those suffering injustice, violence, and aggression.”

The power of Pysanka

The exhibition launches with a vernissage and art-making event titled “Pysanka: Ukrainian folk art of goodwill,” tonight from 5 to 7 p.m. in EV 2.619 and the EV Junction space.

“Pysanka is an ancient tradition of the Ukrainian people, which they have exercised throughout millennia as a tradition of goodwill,” says Kovalevska.

“Just before Easter, Ukrainians make eggs decorated with symbolic patterns that embody the complex relationships between humans in their relation to the universe. They are always made for someone, with an intent or a thought about the other, coding benignant messages of wealth, health, prosperity, resilience, relief, as well as gratitude towards nature and superior forces. Making Pysanka could be an individual or collective process as people come together to share their universes in the name of goodwill — just like everyone who joins FOSTER DIALOGUE, in one way or another.”

Kovalevska says she is also preparing additional events, as well as an online platform — a 3D virtual gallery on Kunstmatrix — that will launch in the near future to broaden the scope of the project and bring other universities into the discussion.

Those interested in attending the vernissage and art-making event can RSVP by filling out this form.

To stay up to date on the project, the public can visit the exhibition’s Instagram page. Any further inquiries about the vernissage, workshop, or exhibition can send an email to Mariia Kovalevska.

Those unable to attend the exhibition are invited to spread the word and donate to the Red Cross to help Ukrainians.