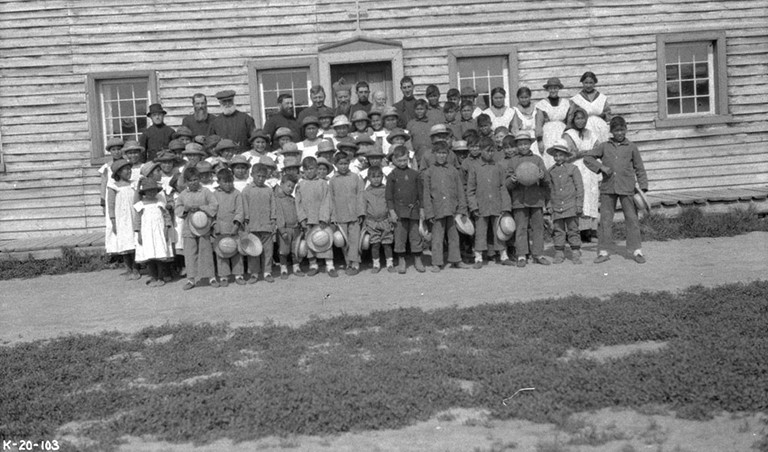 Steven High is a professor of history and founding member of the Centre for Oral History and Digital Storytelling at Concordia. In the opinion piece below, High writes on behalf of the Canadian Historical Association, for which he is currently the president.

This op-ed was originally published in the Montreal Gazette and Le Devoir.

The Canadian Historical Association, representing 650 professional historians across the country, has issued a strong public statement that the history of violence against Indigenous peoples in Canada fully warrants the use of the word “genocide.”

This might come as a surprise to many readers. After all, our history seems far less bloody than that of the United States.

Genocide does not simply refer to mass killings committed over a relatively short time period. It can take other forms and be sustained over time. Genocide was first named as a crime under international law in 1946 by the United Nations in the immediate aftermath of the Holocaust. Two years later, it was formalized in the Convention on the Prevention and Punishment of the Crime of Genocide, which was ratified by 149 states including Canada.

According to Article 2 of this convention, genocide is defined as any of the following acts undertaken with intent to destroy, in whole or in part, a group of people by (and I quote):

The Canadian Historical Association maintains that genocidal intent has been amply established in the historical scholarship. There is a broad consensus on this point among historical experts.

Canada’s Truth and Reconciliation Commission, and the Royal Commission on Aboriginal Peoples before it, have extensively documented the ways that this violence has rippled outward through Indigenous communities.

So, too, has the Final Report of the National Inquiry into Missing and Murdered Indigenous Women and Girls. There have also been a large number of provincial inquiries across the country. The recently completed coroner’s inquiry hearings into the death of 37-year-old Atikamekw Joyce Echaquan, a mother of seven, in a Joliette, Quebec, hospital has sparked outrage over racism in our health-care system.

Unfortunately, the archives are filled with stories like this one.

But it is the recent discovery of hundreds of unmarked graves at former Indian Residential Schools in British Columbia and Saskatchewan that has shaken many Canadians’ understanding of ourselves and our history. Sadly, it is only the beginning. We fully expect similar announcements to come from across Canada (including Quebec) in the weeks and months ahead.

We have been here before.

What is unfolding today is part of a wider history of dispossession and violence that begins with the European occupation of the “New World.” Based on extensive research into governmental archives, missionary records and oral testimony of survivors of residential schools, the ’60s Scoop and families of murdered and missing Indigenous women and girls, historical scholarship has revealed the enormity of past and present violence.

Yet little of that history makes it into our elementary or high school history classrooms. Indeed, in Quebec, there is the mistaken idea that somehow settler colonialism doesn’t apply here.

Historians are partly to blame for this state of affairs. Not so long ago, historians were reluctant to call this history a genocide. Perhaps, it struck too close to home for a profession that was overwhelmingly white. This is slowly changing, as has our understanding of the significance of Canada’s past.

Poor understanding of our history, including a failure to recognize genocide, is part of the historical cycle of violence. It is time that we break that cycle.

I, for one, love my country. But I do so with my eyes wide open. The Canadian Historical Association encourages all of us to recognize this history of violence against Indigenous peoples for what it is: genocide.

Read the Canadian Historical Association’s Canada Day Statement: The History of Violence Against Indigenous Peoples Fully Warrants the Use of The Word “Genocide.”