The Department of Theatre launches its new season November 1
|
By Felipe G.B. 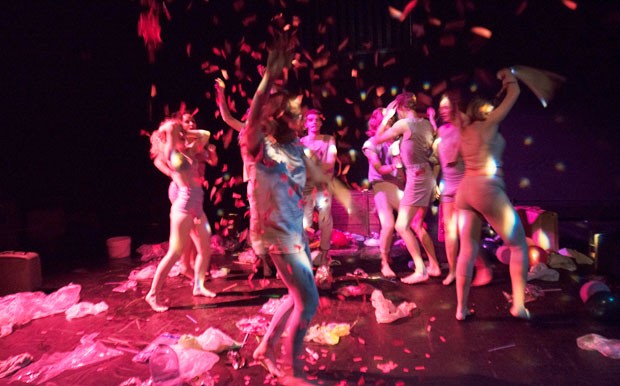 Concordia’s hunger for the dramatic will be sated this week.

The Department of Theatre launches its new season on November 1 with Rinse.Wash.Repeat, a product of the Erlangen Exchange Project, and the One-Act Play Festival, which opens November 3.

Playing at Cazalet Theatre on the Loyola Campus, this post-dramatic piece was developed by participants in the Erlangen Exchange Project. It's a programm that allows theatre students to travel between Erlangen, Germany and Montreal.

Over the course of eight months, cast and crew collectively created the play. Concordia students spent part of the summer in Erlangen, and now the German students are here. Cast member Cleopatra Boudreau, a fourth-year student in the Performance Creation Program, reflects on the long, bi-continental trip that led to their performance this week.

“All of us have gone on such a journey together and to see it manifest in a one-hour piece is really satisfying. Collective creation is such a particular process style — it's equal parts challenging and beautiful.”

Rinse.Wash.Repeat. is about history, Boudreau adds.

“It explores how, by reflecting on the past, we come to recognize cycles. By confronting humanity’s recurring patterns in the present, the piece asks, How do we maintain an awareness of our impact on the future?”

The One-Act Play Festival at the D.B Clarke Theatre on the Sir George Williams Campus features four plays directed by Laura Quigley and Clea Minaker, both artists-in-residence. Each play takes different approaches to production: collaborative, structured, classical or devised. They also encompass a wide range of theatrical styles, from poetic naturalism to absurdism to puppetry.

The Freddie Stories by Lynda Barry

Led by Minaker, The Freddie Stories is an adaptation of Barry’s graphic novel and was developed via rehearsal by the ensemble of puppeteers. The interdisciplinary form lent itself well to a collaborative puppetry adaptation.

“In a comic book there is the page, the frames, narration, dialogue, thought bubbles, drawings, page borders, colour, form, inclusions, omissions and so on!” Minaker explains.

Puppetry functions in a similar fashion, she says.

“The actor-puppeteer can delegate focus to the fictional reality of the puppet, but can also command focus to her own presence on stage. The undertaking of this adaptation has been a gorgeous display of goodwill, courage and collective collaboration.” 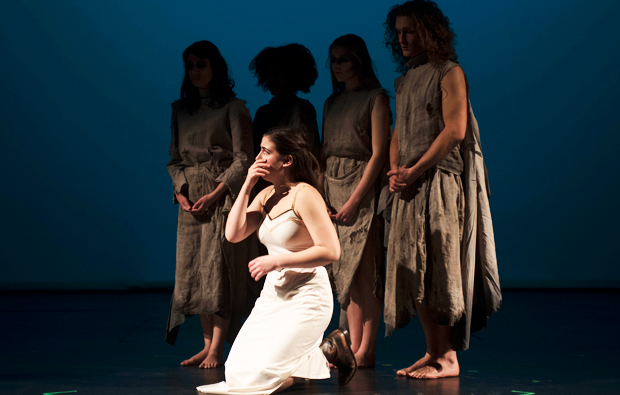 If We Were Birds by Erin Shields

Quigley takes Shield’s Governor General’s Award–winning play, If We Were Birds, in a more classical direction. A tragedy in the Greek tradition, it uses movement, choreography and sound to confront sexual violence as a weapon of war.

The play is based on interviews of women survivors from around the globe and, due to its subject matter, is restricted to an audience of those 18 years and older.

“I’ve been filled with anger and revolt and a fear of the world — of how humans hurt one another. I’ve also experienced healing, and with that, a sense of purpose. It is a story that needs to be told to all of us. And we must listen."

"Working on If We Were Birds has been an intense, rewarding process. Everyone involved has been so committed to treating this play and its subject matter with a high level of respect and commitment.”

Love in Seven Languages by the ensemble

Quigley’s second contribution to the One-Act Play Festival is Love in Seven Languages. Inspired by the Brother's Grimm's 12 Dancing Princesses and Charles Mee's Big Love, it was a co-created by the ensemble and its director.

Over eight weeks, Quigley and her cast juxtaposed their own writing with the text from their source materials. Exploring thematic concerns with love, family, sexuality and power, the outcome is a play-in-progress and a labour of love.

"Love in Seven Languages has been a beautiful process. Having the opportunity to do a collective piece that not only incorporated works from published playwrights but included some of our own writings and experiences was a great introduction to adaption. "

“We’ve made a fairy tale that tells a modern-day story," he says.

The Beckett Shorts by Samuel Beckett

Due to Beckett’s specific stage directions, the fourth play in the festival strictly adheres to the text as written. All about timing, rhythm and pace, The Beckett Shorts has a rigid structure that demands precision from its performers.

Despite this, there’s still room for creativity in the piece, says Minaker, who also directed this production.

“Our aim was to investigate through stylization and form what it means for an actor to use their training in order to respond to a specific aesthetic. The methods were more corporal and movement driven.”

This type of work should not be unfamiliar to actors, but rather, constitute a part of their experience, she explains.

“Beckett’s guidelines are not meant to set aside interpretation, but rather to encourage the actors to use their skills and create within the set parameters.”

​
Rinse.Wash.Repeat opens on November 1 and the One-Act Play Festival begins November 3. Find out more about Concordia’s Department of Theatre.