From August 3 to 5, Concordia’s FOFA Gallery supports community belonging with an outdoor film and cultural festival
|
By Ossie Michelin 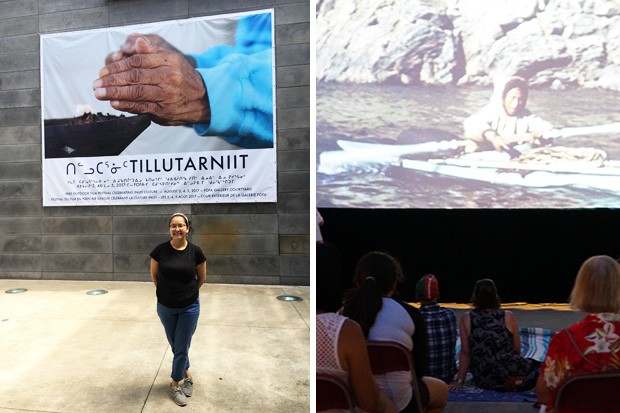 A billboard in downtown Montreal is garnering the attention of Inuit and non-Inuit alike. Prominently displayed outside of Concordia’s FOFA Gallery, it depicts an Inuk elder warming their hands by the qulliq, a traditional Inuit seal oil lamp.

The accompanying text is written in French, English and Inuit syllabics, advertising Tillutarniit, an outdoor Inuit film and cultural festival being hosted from August 3 to 5 in the FOFA Gallery Courtyard (1515 Ste. Catherine St. W.).

“It’s really nice to have film screenings outside. Last year, we got a lot of people who were just walking by who stopped in to check out the events,” says Tillutarniit coordinator and curator, Isabella Weetaluktuk.

“We’re hoping for that again this year. It’s a great way to be open and get all kinds of people to be a part of the festival.”

‘Making an Inuk mark on the city’ 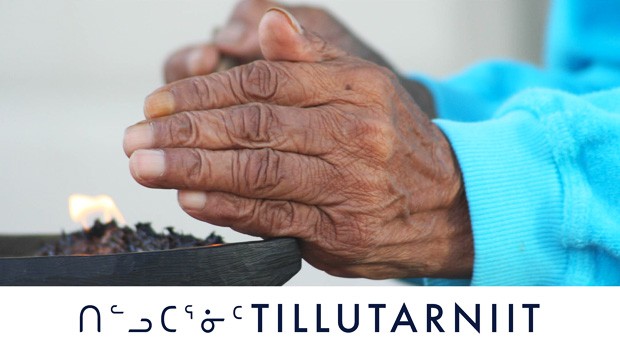 The billboard also attracts a lot of attention from Inuit visitors. Weetalatuk says they are not accustomed to seeing themselves represented so prominently in Montreal’s downtown core.

“It’s somewhere where you’re not used to it being, and now we have a huge banner outside. Even before we do the festival, we’re making an Inuk mark on the city,” she says with pride.

“It’s important because a lot of Inuit who came last year — and I hope they’ll come again this year — said thank you so much for creating a space that’s for them. Like, it’s wonderful to have an event that’s specifically inviting and meant for Inuit.”

For Jennifer Dorner, director of the FOFA Gallery, Tillutarniit is one of the venue’s highlights of the year. She says it opens up the gallery space to Inuit, other Indigenous people and the public at large.

“This is a wonderful opportunity to bridge out, connect with the local community and build new audiences who would otherwise likely not come into the space,” Dorner explains.

“In my opinion, it is the responsibility of all cultural spaces in Canada to really make sure there’s space for Indigenous programming, and that’s something we continue to try to provide more space for.”

While Tillutarnitt is primarily a film festival, Weetaluktuk says she wants it to be a “real Inuk event” — not just talking about and celebrating Inuit culture, but actively participating and engaging in it. Normally, she says, events tend to be held in Dorval, where a large portion of Montreal’s approximately 1,500 Inuit live. But she believes it is important to hold this event at Concordia, in the heart of Montreal.

Each evening will start off with a feast of country foods, such as seal, Arctic char and caribou. Following the meal will be a selection of Inuit games — both traditional ones and popular party games you’ll find Inuit playing during the holidays. Before the films begin each night, there will also be musical and spoken-word performances by Inuit artists.

“I think a lot of people’s perceptions of Inuit in the city are limited. For Inuit to take space in the city and make it very Inuk, that provides more of a positive representation,” explains Taqralik Partridge, a throat singer, spoken-word artist and writer who is performing at the festival on the evening of August 4.

She believes Inuit social events are needed to help people connect and not feel alone in Montreal.

“It’s really important for Inuit in the South to have gatherings like this. You can feel really disconnected from being an Inuk growing up in the North, and having a connection to other Inuit is so important. To attend an Inuit-specific event and see other Inuit celebrating — it just feels great.”

Tillutarniit Film Festival is a free event and everyone is welcome. It will be held in Concordia’s FOFA Gallery Courtyard (1515 Ste. Catherine St. W.) August 3, 4 and 5, from 8:45 to 11 p.m. on the Sir George Williams Campus.