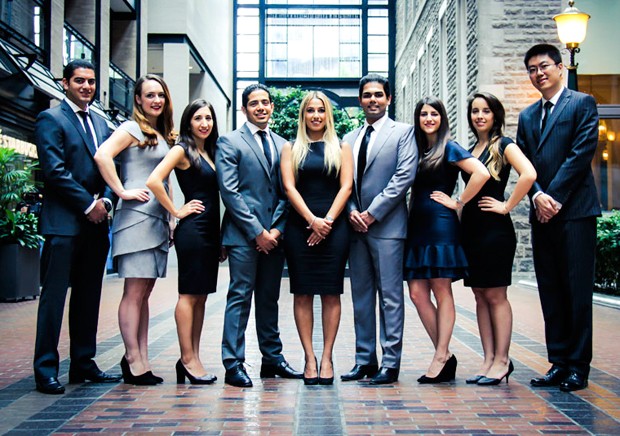 “To our knowledge, we’re the first carbon-neutral case competition in North America.”

The six-day contest starts on January 1, drawing students from 36 schools around the world. Teams of four students vie for the Concordia Cup’s $10,000 cash prize by analyzing seven unpublished business cases. The week is shot through with networking opportunities and experiential learning.

“The credits offset emissions from the flights, the hotel and things like heating,” explains Karras.

“We found a new partner in Téo Taxi for green transport. Plus, we’re composting all organic waste and using recycled paper. As much as possible, we’re serving organic, vegetarian, locally sourced food and beverages.”

More women on the judging panels

Another high-water mark: there are more than 100 female judges this year.

“Previously, there were between 20 and 25 per cent women on the judging panels, but now we’re up to 38 per cent,” says MBA student Brandon Abraham, the organizing committee’s executive assistant for judges.

“Our goal moving forward is to reach at least 50 per cent women.”

Concordia awards the nine student members of the organizing committee academic credit for their work. Responsibilities range from recruiting 400 volunteers to organizing the participating schools, as well as handling the hotel reservations, booking convention rooms and managing budgets, logistics and marketing.

“We also arrange social events, so participants can attend a hockey game, for example,” says Rosanna Fazio, executive assistant of marketing. “There’s a dinner for the teams’ coaches and a banquet to announce the winners.”

A key aspect of the event is securing sponsorship. The organizing team is poised to meet its target of $250,000.

“It’s thrilling, personally, to try to reach this goal,” says Suha Quraini, who’s in charge of sponsorship. “Failure is not an option. I’m really motivated.”

Quraini points out that companies decide to sponsor the case competition for many reasons — namely, increased visibility for their brand, recruiting opportunities and a platform to connect with the judges and volunteers.

When Roberto Blanc was an MBA student in JMSB in 2015, he had Quraini’s job on the organizing committee. Now he’s back, but as a sponsor.

The corporate marketing and communications director at Lallemand met his current boss and CEO at the case competition. That meeting landed Blanc a consulting contract, which subsequently led to a permanent position.

“Being discreet is part of our corporate DNA,” says Blanc (MBA 15). “But at the same time, it is extremely important for us to be engaged with the education community. Among other benefits, it allows us to position ourselves as an enticing employer in front of tomorrow’s leaders, so we can ultimately attract this global talent. It’s a win-win.”

A judge gives back

The judges come from as far away as Toronto, New York and Boston, and many return again and again. Concordia alumni Rod Budd (BComm 74) has been an MBA-ICC judge for nearly 20 years.

“It’s refreshing to see a group of young students with their new approaches,” says Budd, a corporate director and retired partner at EY.

“It’s an incredible learning experience for the students to make live presentations in front of executives. You can’t do everything by text. Eventually, you need to meet and talk to people. The case competition increases self-confidence.”

One of Budd’s favourite events is the “live case,” where a company presents a real-world problem for the students to solve. It’s open to the public and will be streamed on the MBA-ICC’s social media accounts.

“In the past, we’ve had the Habs and Bombardier, to name just two,” says Budd. “Nobody knows the identity of the company presenting the live case until the morning of the event, so it’s really exciting.”

Root for the home team

JMSB enters its own team into the MBA-ICC every year under the guidance of Tim Field, a senior lecturer in the Department of Management. He auditions students from his MANA 691: Strategies in Action course to participate in the competition.

“Of all the experiences that an MBA has to offer, few provide the intellectual challenge, lesson in group dynamics and adrenaline rush of the JMSB MBA Case Competition program,” he says.

“Students within this program are highly sought after by recruiters. They become part of a strong network of competition alumni and are truly the pride of our MBA Program.”

Attend the live component of the John Molson MBA International Case Competition on Wednesday January 4, from 9:15 a.m. to 5 p.m. in the Hotel Bonaventure.

It’s open to the public with no registration required. The live case will also be streamed on Facebook.