More than a shared office, Temps Libre Mile End offers a free community area equipped with Wi-Fi, a library and an arcade
|
By Renée Dunk 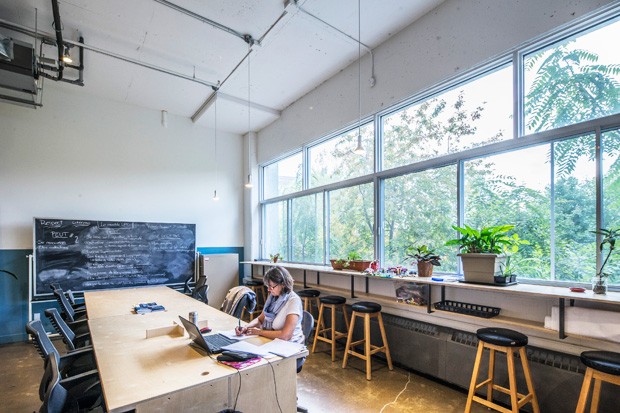 The social co-operative is located just east of St-Laurent Boulevard, south of the CP railway tracks and surrounded by the Champs des Possibles urban green space.

Neighbour to numerous community organizations, media companies and art, design and gaming studios, a portion of the space is open to all. However, a portion of the workspace is set aside for Concordia researchers and graduate students involved in community, social innovation and urban transformation projects.

‘What it means to truly embrace our city’

Temps Libre’s key mandate is to provide a free public space for the community at large. This is made possible thanks to user fees generated by co-working post rentals.

Graham Carr, Concordia’s provost and vice-president of Academic Affairs, notes that being a “first mover” in the co-working movement permits the university to play an important role in Montreal’s knowledge economy sector.

“Becoming the founding institutional partner of Temps Libre Mile End allows us to explore what it means to truly embrace our city,” he says.

“From academic residencies to experimenting with ways of disseminating knowledge to the community, the possibilities for teaching and research initiatives around social innovation and change are boundless.”

As part of the university’s partnership agreement, Concordia researchers and graduate students have access to a corner of the co-working section of the space with two sets of four-seater tables.

Services for co-workers include a large meeting room with a built-in projector for classes or workshops, as well as access to the public area of Temps Libre, which has comfortable seating, free Wi-Fi, a library and an arcade.

‘Concordia was founded with a community focus’

Several university researchers are already using the space — Rebecca Duclos, dean of the Faculty of Fine Arts, to host Institute for Urban Futures meetings; Kimberley Manning, principal of the Simone de Beauvoir Institute, to launch the Critical Feminist Activism in Research project; and Jill Didur, professor in the Department of English, to facilitate her Global Urban Wilds project.

In addition to researchers, staff members in the Office of Community Engagement now hold regular meetings at Temp Libre.

Duclos calls the idea of the dispersed or distributed university compelling. “Concordia was founded with a community focus through Sir George Williams, so it makes perfect sense that we again inhabit a physical and intellectual co-working space outside the campus walls.”

She adds that the impetus to launch the Institute for Urban Futures came partly out of their ability to use a space such as Temps Libre to gather and disseminate urban-based research, curriculum and interventions, and to make a space for partnerships and residencies to organically develop over time.

André Roy, dean of the Faculty of Arts and Science, concurs.

“Temps Libre is a natural fit with our faculty because we share the common values of diversity, accessibility, engagement and plurality,” he says. “Located in one of Montreal’s most creative neighbourhoods, this dynamic space will allow us to collaborate with community partners in new and exciting ways.”

‘An incredible dynamic between users and the neighbourhood’

Didur’s research includes designing a locative media application for use in, and about, a particular geographic area — in this case, the Champ des Possibles. She uses the Temps Libre co-working space as a window into this green space.

“When I create a locative media narrative, it’s important to be in contact with the space and the stakeholders,” says Didur. “Temps Libre offers my team both — we’re close to the environment that we’re investigating as well as the group that advocates for it.” Les Amis du Champ des Possibles strives to protect this urban green space and they also work at the co-op.

Gaëlle Généreux is the co-founder of Temps Libre. She says her group’s partnership with Concordia is an example of the kind of synergy that sustains the organization. “The co-working model ensures the life of our public space, but it also has a much greater function in that it helps to create an incredible dynamic between users and the neighbourhood’s eocsystem.”