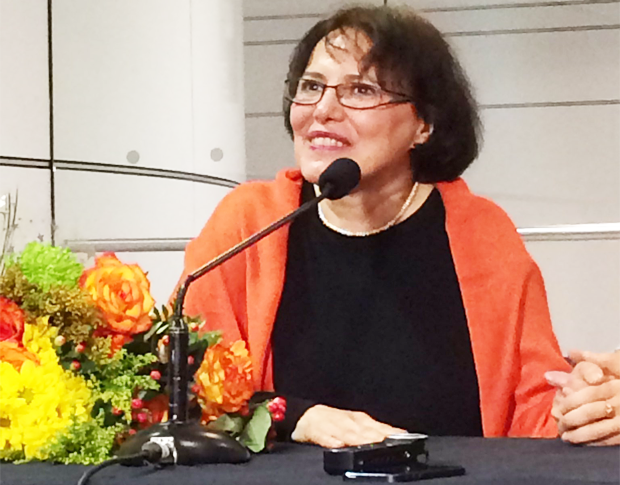 After her arrest in Iran last spring, Concordia professor emerita Homa Hoodfar spent almost four months behind bars in the country's notorious Evin Prison. She was released on September 26, and flew to Oman.

This morning, Hoodfar landed at Montreal's Pierre Elliott Trudeau International Airport, where she was greeted by a throng of reporters and jubilant loved ones.

“It’s wonderful to be home and be united with family and friends again. I’ve had a bitter seven months and the detention has left me weak and tired.”

At a press conference upon her arrival, Hoodfar called the feeling of being in a secure place “indescribable.”

She addressed the media along with her niece Amanda Ghahremani, who welcomed her in Oman after she was freed on September 26. The two travelled together back to Montreal.

“The most wonderful part of my release was when I walked out from the plane and saw Amanda. I didn’t expect her to be there. I just hugged her and felt free.” Ghahremani worked tirelessly for her aunt’s freedom throughout the ordeal.

Hoodfar thanked the Canadian and Omani governments for securing her freedom, which she still barely believes to be true. “I didn’t feel like I was going to be released until I was in the air,” she said.

“As they say in Iran, nothing is possible and everything is possible. So, in this case, I wasn’t sure if things could change at the last minute. When I was in the jet, I knew I was free.”

She also expressed gratitude to her colleagues, students and the entire academic community who mobilized and supported her throughout the hardship.

It’s speculated that Hoodfar was imprisoned for “dabbling in feminism” because of her research on women’s sexuality and homosexuality within the context of Muslim countries. She said the experience hasn’t deterred her from pursuing her work. In fact, “it has actually opened up new avenues that I may not have pursued before.”

Relieved to be reunited with family and friends, Hoodfar looks forward to returning to her neighbourhood and enjoying what is left of the warm weather. “When I was in my cell, all I could think about was missing summer in Montreal, which I love. And I missed the fact that I didn’t have my geraniums.”

When asked if she would go back to Iran, Hoodfar responded, “I don’t think I’ll return. I think for a while I’m going to stay here.”