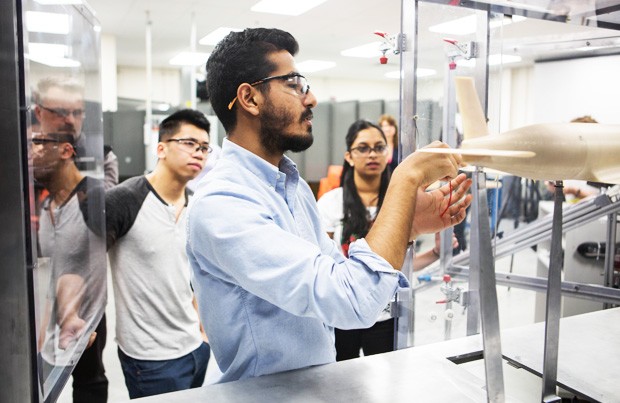 On October 1, the Engineering Change Lab will convene in Ottawa to collaborate with the federal government on advancing its Inclusive Innovation challenge, which addresses many of the most pressing issues facing our country and the world.

Among the conference’s attendees will be Amir Asif, Concordia’s dean of Engineering and Computer Science, who has been a vocal proponent of the multi-stakeholder social laboratory since its launch more than a year and a half ago.

“The Engineering Change Lab is a noble initiative intended to further enhance the contributions that engineers make to society,” says Asif, who was behind Concordia’s decision to champion the innovative platform.

“By participating, we help lead the changes in the engineering education and profession that are needed to unlock its higher potential.”

Asif explains that as a champion, Concordia shares responsibility for the lab’s sustainability by providing leadership and by helping marshal the resources required for it to function effectively.

From guiding and overseeing secretariat functions alongside fellow lab champions to providing financial sponsorship, in-kind staff time towards specific lab initiatives, hosting events, and engaging outside organizations and resources to support the lab.

Mark Abbott, a member of the lab’s secretariat, says Concordia is crucial to the group’s governance.

“By taking on an extra level of leadership as a champion, Concordia has shown it’s willing to shake things up and keep a finger on the pulse of what needs to come next.” says Abbott.

What is the change lab?

Co-convened in January 2015 by Engineers without Borders (EWB) and Engineers Canada, the Engineering Change Lab is dedicated to deepening a shared understanding of the higher potential of the profession and taking tangible action to help unlock this potential.

“What we’ve done is convene a microcosm of the system we’re trying to change — individuals who represent all corners of the Canadian engineering profession,” says Abbott.

The group meets three times a year and has so far developed powerful insights into the future potential of the profession. They have also put together a portfolio of nine initiatives that focus on a range of issues, from lack of diversity to ethical failures, and from problems with education to low innovation rates.

“The need to open ourselves up to bigger questions is important,” Abbott says. “Unlocking engineering’s full potential will require us to consider what changes are needed to the structures and culture that underpin our profession.”

In between meetings, the lab breaks into smaller teams to advance each respective initiative by conducting experiments and engaging those outside their group for support.

One example that grew out of the lab is the National Initiative on Capacity Building and Knowledge Creation for Engineering Leadership (NICKEL) which was co-created by representatives from three universities: University of Toronto, McMaster University and Concordia.

NICKEL’s aim is to establish a distinct field of engineering leadership.

As Concordia trains one of the largest engineering cohorts in the country, Asif says the university must stay at the forefront of providing an exceptional learning experience. “That means going beyond technical education and including contributions to society in non-traditional areas.”

The last official lab meeting took place in May at Concordia. Twenty young leaders were invited to participate, in addition to regular lab participants from industry, government agencies, non-profit organizations, and academic institutions.

Geordan Vine, a third-year mechanical engineering student and former president of EWB Concordia, was one of the participants.

“To have a level discussion about what you think is wrong with the profession and how you want to see it change, and to have your profession’s leaders listen to you — that's an incredible thing,” says Vine.

“By including us they’ve provided the tools and knowledge to continue these types of critical discussions amongst ourselves here at Concordia.”

Abbott says that engaging tomorrow’s leaders is an important facet of the lab.

“The change we're talking about includes the broader engineering community comprised of officially registered engineers, those currently studying any one of the profession’s many fields and even the broader community of people who have graduated with an engineering degree, but who have not yet sought registration for whatever reason.

“That's the scale of the movement we're talking about — think 600,000 engineers taking on a bigger leadership role in society.”

Interested students and early career professionals are invited to register for the Engineering Change Lab Re-Engineering Innovation reception, taking place from 5-7:30pm, on October 1, in Ottawa.  The event is free, but space is limited.