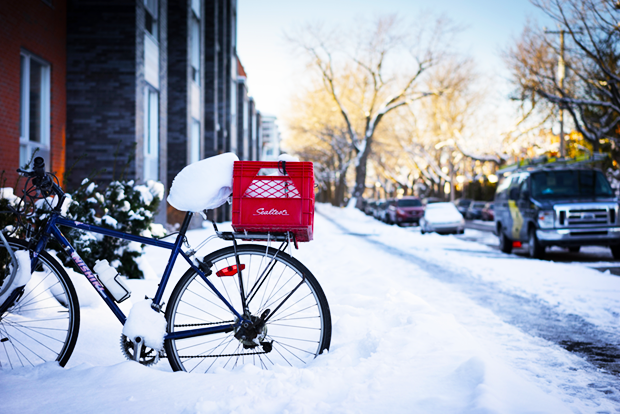 When you think of Montreal landmarks, which ones come to mind? The Olympic Stadium, Mount Royal, Saint Joseph's Oratory — or how about The Main?

These beloved destinations might all make the road map for this year’s citywide Francofête rally on Friday, March 18, as students from Concordia and McGill cycle, walk or “metro” to as many key Montreal locations and public artworks as possible.

“This is the first time we partnered with McGill’s Centre d'enseignement du français for the rally and invited their students to join us,” says Denis Liakin, chair of Concordia’s Département d’études françaises.

“It’s good for Montreal’s two anglophone universities to collaborate for this kind of event, and get out into the city.”

The 2016 edition of Francofête (March 17-18), an annual celebration of Quebec culture, is part of a worldwide celebration that originated in 1997.

The rally is this year’s highlight. It has attracted almost 50 students so far, as well as sponsors including Druide informatique, CLE International and l'Office québécois de la langue française. Rally winners will take home a range of prizes, from Antidote 9 bilingual software and Le Petit Druide des Synonymes et des Antonymes dictionaries to 50 copies of French-language textbooks from CLE International.

“Most of the students who participate are international, so the rally helps them discover Montreal,” says Maria Trigueiro, administrator for Concordia’s Département d'études françaises and lead organizer of the university’s Francofête celebrations.

“We’ll have teams of six students leaving from different buildings on the Sir George Williams Campus. Students’ level of proficiency in French will be tested to make sure the teams are evenly skilled.”

CAPF, located in Room LB-628 of the J.W. McConnell (LB) Building, features textbooks, DVDs of Quebecois and French cinema, French-language literature and magazines, and four computers, as well as a television, couches, audiovisual equipment and a library of language-learning software.

“It’s a place to learn French that complements the classroom,” says Liakin. “Plus, it centralizes our free activities for students, like conversation groups and tutoring services. We financed it entirely with profits from our testing centre.”

This testing centre is a point of pride for Concordia. In 2012, the Département d’études françaises became certified by the Centre international d’études pédagogiques to be an official location for the Test de connaissance du français pour le Québec. Concordia professors who mark the tests donate their fees to the department to pay for CAPF resources.

“We’re so excited about the grand opening,” says Liakin.

“We’ve been wanting this centre for a long time. The goal is to continually add new services and resources to CAPF, like a French résumé workshop, for example, and French cinema sessions.”

André Roy, dean of the Faculty of Arts and Science, and Catherine Bolton, vice-provost of Teaching and Learning, will both attend the grand CAPF inauguration.

A third main event on the Francofête calendar is the Mini-jeux de la traduction on Thursday, March 17.

“We hold it in the department and it’s open to all Concordia students ,” says Trigueiro. “We’ll play translation games for prizes. It’s a lot of fun.”

“Translation brings me so much joy, so it’ll be a great event. It’ll also help raise the profile of the program — not enough people know about it. It’s the only program in Montreal that gives a BA for translation from French to English.”

Concordia’s fourth official Francofête celebration takes place on March 17 and 18, 2016. The rally runs from 9:30 am to 3 p.m. on Friday, March 18. Check in with the Département d'études françaises for more information about Francofête events like the Mini-jeux de la traduction, and to find out how to join the rally.