Athletic therapy alum Jean-Baptiste Laporte joins his team, the Carolina Panthers, on a journey into football history
|
By Tom Peacock 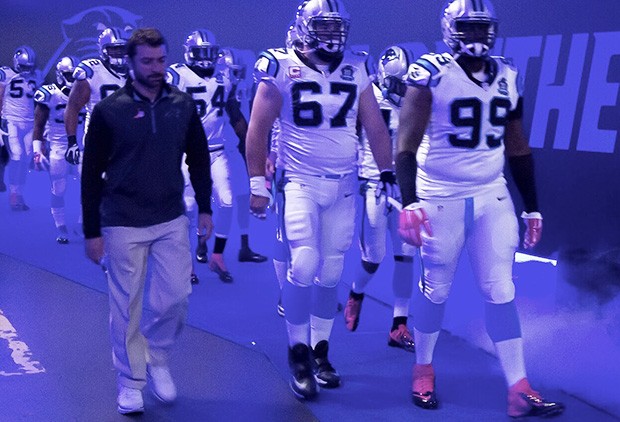 “I tell them all the time, ‘I've no doubt that if you want to do this, you'll be doing it,’" says Jean-Baptiste Laporte (left) to aspiring athletic therapists who might be gunning for a career with a professional sports team.

This Sunday, February 7, 2016, as he’s done before every Carolina Panthers game for the last three National Football League (NFL) seasons, Concordia alum Jean-Baptiste Laporte, BSc 06, will wake up and go to work.

An assistant athletic trainer and physical therapist with the Panthers, Laporte will head to a room beneath the stadium to tape, massage and otherwise treat his team’s carefully selected cast of professional football players.

Except this Sunday, it’s Super Bowl 50.

And this year, the Panthers went 15-1 in the regular season, tore through the playoffs, blew out the Arizona Cardinals 49-15 in the National Football Conference (NFC) Championship Game, and earned a berth in the biggest game of them all.

On Sunday, the Panthers could win the Vince Lombardi Trophy for the first time in their 21-season NFL franchise history.

“As we get closer to the big game, I don't expect anything to change,” Laporte says. “It's going to be the same. It was the same during the playoffs. Everyone is expecting something to change, but the players are professionals, and everybody's just doing their job.”

An unlikely road to the NFL

Laporte, a native of Paris, France, came to Concordia in 2004 to pursue a bachelor’s degree in athletic therapy. It was the beginning of a journey to land his dream job with an NFL team.

When he finally secured his position with the Carolina Panthers in 2013, Laporte was elated, but part of him had expected it to happen. After all, he’d put in the necessary time and effort.

“It took me 10 years, so I was ready in terms of my skills,” he says. “I had to organize myself, of course, get used to the tempo and what was expected, then make sure my English got better, and that's it.”

Looking back on his three seasons with the Panthers, Laporte says being part of an NFL team is all that he thought it would be, and more.

Looking back on the Panther’s stellar season, Laporte says one game stands out for him: Sunday, November 15, against the Tennessee Titans — two days after the terrorist attacks in Paris, the city where Laporte was born and raised.

“It was a very, very difficult weekend for me,” he says. “We received great support from all of the team, all of the players. I received phone calls right away, and then there was a minute of silence for people from Paris before every NFL game, with the French flag. That was very special for me.”

“Then some players gave me items from the game that they signed, that said they played for Paris … I'll keep them, not as a souvenir of what happened two days before, but of the players, of how great these guys can be.” 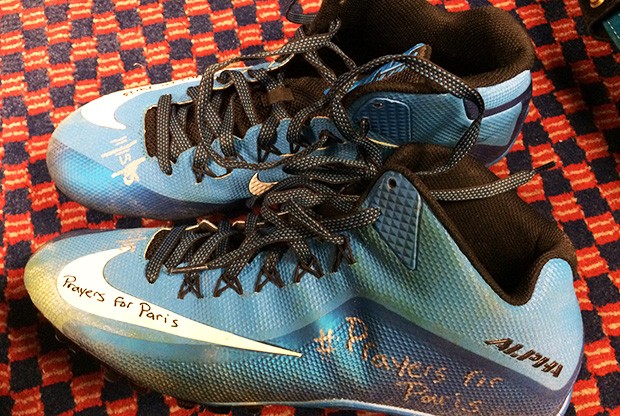 Veteran Carolina Panther Charles Tillman gave his cleats to Laporte after the November 15 game against the Tennessee Titans.

One game at a time

Speaking to Laporte, there’s no doubt that he has a lot of love for his team. But did he expect them to achieve what they did this season? To make it all the way to the Super Bowl?

“Every year you expect to get to the big game,” he says. “When you're on the team and when you live with the team, you know exactly what the team is made of. So, no, for us it was no surprise. You play one game at a time, and each week, everybody is telling you you're going to lose. And you end up winning, and you keep winning.” 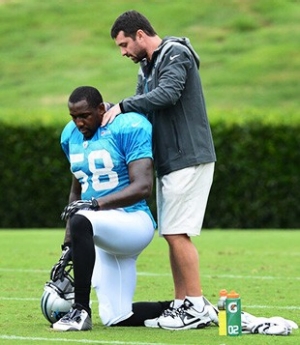 The story of this season’s Carolina Panthers is a lot like the story of one Jean-Baptiste Laporte — coming in under the radar, working really hard and accomplishing the dream, buoyed by the belief that it’s going to become a reality.

“Nothing's impossible, you just have to work hard and push through the doors,” he says when asked what he tells aspiring athletic therapists who might be gunning for a career with a professional sports team.

“I had no connections coming here. I just had to keep pushing and pushing, and work hard. At one point somebody's going to notice that.

“Most of them are very, very talented therapy students and they like what they do. So I tell them all the time, ‘I've no doubt that if you want to do this, you'll be doing it.’”

Somebody that has been in Laporte’s thoughts a lot this week, as his team gets closer to Sunday’s kickoff, is David Jones, an athletic therapy instructor in Concordia’s Department of Exercise Science, who passed away suddenly on May 20, 2014.

“As soon as we won the NFC Championship and we were going to the Super Bowl, I thought about Dave,” Laporte says. “I'm sure he would have made the trip, because he made the trip to the Grey Cup every year. He was very, very instrumental in helping me get to where I am right now. I know he's going to be watching the game, too.”

Read about Jean-Baptiste Laporte’s extraordinary journey to a career in the NFL.

Find out more about Concordia’s Department of Exercise Science.