From Paris to Concordia … and the NFL

In the run-up to the Super Bowl, a grad recaps his 10-year quest for a dream job with the league
|
By Tom Peacock 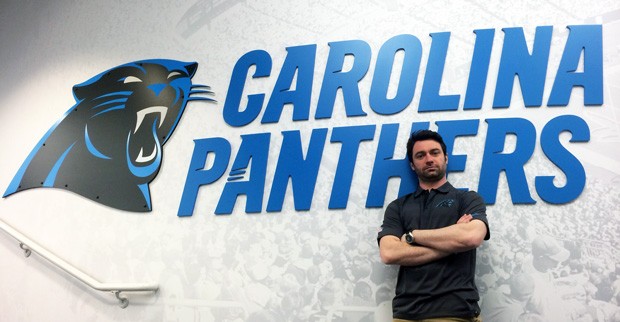 Jean-Baptiste Laporte will always remember the first few minutes of the Carolina Panthers’ pre-season game against the Chicago Bears on August 9, 2013. It was then that his new team officially welcomed him to the NFL.

“They knew it was my first game — the players knew, the staff knew — and so they were very excited for me, and congratulated me. It was very special. ”

The Panthers, he says, “loved my story.” It’s not hard to see why.

In 2004, Laporte left his home, his family and his job in Paris, France to come to Concordia and pursue a bachelor’s degree in athletic therapy.

He already had a master’s degree from a Belgian university and a job as a licensed physical therapist. But it was a necessary move in what would become his highly improbable, ultimately successful 10-year effort to land a job with the National Football League’s Carolina Panthers.

Robert Kilgour, a professor in the Concordia Department of Exercise Science, remembers the first time he met Laporte and heard about his dream.

“Here's a guy coming in, a French citizen with a Belgian degree, and he couldn't even speak English all that well,” Kilgour says. “I understood enough of what he was saying to gather that he was interested in football. ‘Soccer, you mean?’ I said.  ‘No,’ he said. ‘American football.’”

Kilgour thought the odds were stacked against his new student.

“I kept on saying to him, ‘You'd better have a backup plan.’ How many kids in the U.S. would die to be one of the assistant therapists for a professional American football team?”

Laporte knew all about that. He fell in love with football at the age of 11 when, during a visit to Boston in 1991, an American pen pal took him to see the New England Patriots play the New York Giants. After that, he says, “I would stay up late to watch all the Super Bowls and whatever games were televised.”

As soon as Laporte embarked on his career as a physical therapist, he began to dream of working with NFL athletes. But while he was already licensed in France, pursuing the same profession stateside would require a degree in athletic therapy from a North American institution. So Laporte applied to Concordia’s Department of Exercise Science, and was accepted.

Thanks to credits earned in Europe, he completed the three-year program in two years, all the while traveling back and forth to France to earn enough money to pay for his studies — at the time, Laporte wasn’t qualified to work in Canada, either.

He credits Kilgour with making this complicated arrangement possible.

“He was very, very helpful,” Laporte says. “Without him allowing me to take the classes at Concordia so that they fit my schedule, I wouldn't be here today. I would have had to quit.” 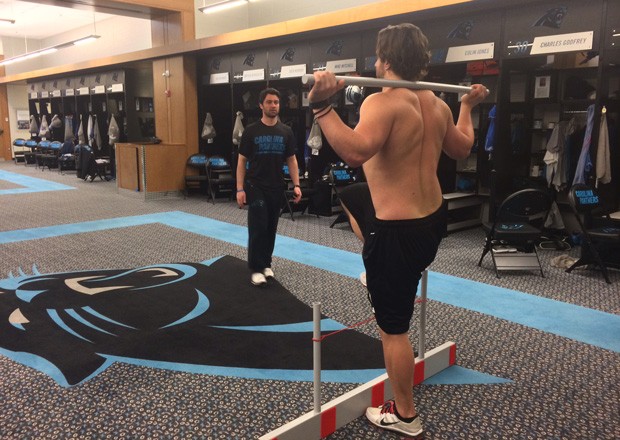 Laporte screens the movements of a Panthers fullback. | Courtesy of Jean-Baptiste Laporte

Breaking into the pros

After graduation, Laporte landed a part-time gig as a lab instructor at the university. The next year, he passed the American exams and became a certified athletic trainer in the U.S. He was finally qualified to chase down his ideal job.

With the help of Liz Fradette, an administrator in the Department of Exercise Science, Laporte sent out applications to every team in the NFL. No luck.

The next year, he did the same. And the next, and the next…

At the same time, he pursued more professional qualifications.

One of Laporte’s chief hurdles was that he had to apply for student internships with the NFL.

And as a fully licensed working professional, he was overqualified.

In spite of this, Laporte kept adding to his résumé. He flew from Montreal to Chicago once a month to complete a year-long course in muscle activation techniques.

“I didn't want to reapply with the exact same CV every year, so I took steps to have something new, and to put myself in a better position to apply,” he says. 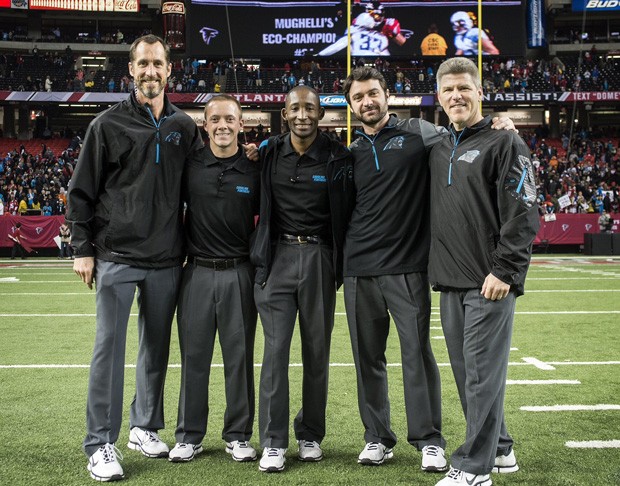 Finally, in 2011, Laporte got a call back from Ryan Vermillion, head athletic trainer of the Carolina Panthers. Vermillion was looking for an intern.

“I was really close. I was short-listed. They seemed to like me,” Laporte says. But then the 2011 NFL lockout happened.

“They called me back to say, ‘The lockout is coming, and we're going to have to go with somebody else when it's over.’ I thought to myself, ‘Okay — it’s really, really bad luck.’”

But Laporte didn’t give up. Instead, he took advantage of his new connection: he set up a visit with the Panthers staff when he was in Charlotte, North Carolina for a conference.

Laporte also continued to beef up his credentials. In the summer of 2012, with the goal of gaining “big football” experience, he accepted an unpaid internship with the Texas Longhorns, an NCAA team. After that, he applied for the Panthers internship again.

By then Vermillion, was in search of a full-time physical therapist/assistant athletic trainer. He remembered the persistent French guy with the long CV. And now that CV had Texas on it, too.

On June 6, 2013, the Panthers flew Laporte down to Charlotte for a day of interviews. On June 7, they phoned him in Montreal and offered him the job.

Kilgour remembers that day well. “When he got the job, JB was in my office, and he was pinching himself, saying, ‘I don't believe it. I don't believe it.’ I said, ‘JB! You finally did it!’ There was some self-doubt, but he kept trying. Any other person would have given up the ship years and years before.”

On one level, Laporte wasn’t too surprised when it finally happened. After all, he’d been working towards the same goal for a decade. “I felt like I was ready. It was my time. This was something I always wanted to do, and I took all the necessary steps.” 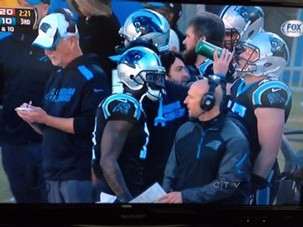 These days, the Carolina Panthers keep Laporte extremely busy. He runs rehabilitation and injury-prevention programs. Come game time, he’s hydrating players, taping them, massaging them — taking care of their every need so they can concentrate on the challenge at hand.

When asked what it’s like to finally be part of the NFL action, Laporte pauses.

“It's tough to describe,” he says. “It's very intense. There's a lot of noise, a lot of big bodies everywhere — the crowd, the music. It's a big show. You have to be sure you’re focused on what you need to do. You can’t be a spectator anymore.”

Work out on the cheap with the Concordia Stingers.