Crazy locations? 17 eight-year-olds? The undergrad 'never took no for an answer' — and ended up at Canada's Top Ten Film Festival
|
By Junna Chif 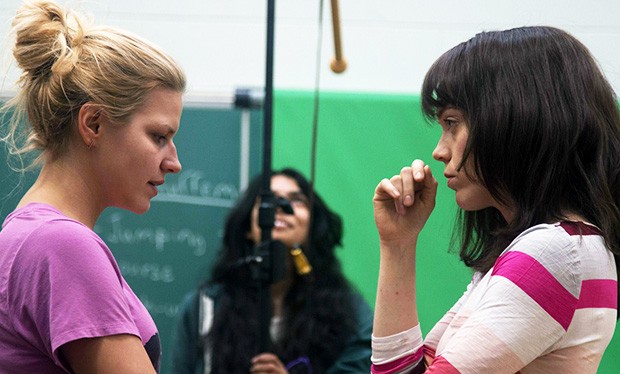 An "intense period of pure creation": Junna Chif (left) on the set of Mme Liliane with actress Catherine Bérubé.

Here's how Chif came to make Mme Liliane, the 11-minute tale of a primary school teacher who is waiting for a life-changing phone call.

Filmmakers compare creating a film to the birth of a child. I cannot agree more. There is nothing more beautiful than to give birth to a film; it brings life to my deepest emotions and voice to my wildest ideas.

From development to post-production, my experience of film work is pure joy, while forcing me to face some of the most difficult moments in life.

Cinema combines all artistic forms: performance, image, music, dance, composition, magic and more. With this, we craft work that can be moving, thoughtful, entertaining and accessible to all.

I know I have a good film idea when, in an instant, I see it clearly from beginning to end. Then I sit down and write out the whole film: shots, dialogue and gesture; then, slowly, I refine it over several months.

The most stressful period of filmmaking is also the most emotional and the one I enjoy the most: the shoot! During this intense period of pure creation, I finally see and hear what was once in my head. Importantly, this is also when I get to work with the actors, a favourite element of filmmaking. 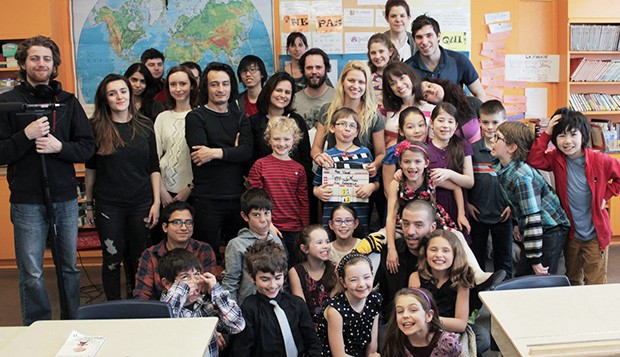 With my short film Mme Liliane, I had to prove I could make it in a school setting at Concordia. Production constraints included feasibility and originality, judged by a selection committee, tasked with choosing the projects to go into production.

I felt I had a compelling story; however, the entire film is set in a primary school with a cast of 17 eight-year-olds.

At the beginning of the year, I was told, "Good luck convincing the jury!" Once in front of the jury, I had all the essentials ready: lead actors, 17 children, the school, my crew and more. I only had to convince them the film was worth shooting!

Concordia has provided me so many opportunities to excel. I had to prove not only that I had a great film idea, but that I was prepared to bring it to realization. I also learned to take criticism, once very difficult for me, but which I now truly value.

Each year, I realize more and more how difficult it is to make films. I am fortunate to have learned this lesson; now I am even more ready to find my place in our industry.

Mme Liliane has now screened at festivals across Canada and the United States, and will travel more this year. I am excited that the film has already won two prestigious awards: Special Jury Prize at the 2015 Calgary International Film Festival, and Best Student Short Film (Live Action) at the TIFF Canada's Top Ten.

I make films for the public, and hope they will be touched and moved. Being selected by festivals and honoured with awards is extremely validating and proves to me that I am on the right track; for that I am deeply grateful. It gives me the drive to move forward with my work.

Now, I am writing my first feature film, a story set in Quebec, written in French, English and Russian.

When I graduate this year, my advice to first-year students will be: make as many mistakes as you can while at school, it’s the best place for it and a great way to learn. Most importantly, do not take 'no' for an answer.

Work as hard as you can to pursue your dreams.