'We want professors to experiment in the classroom'

Philippe Caignon's passion for pedagogy makes him an ideal match for his new position as academic director of Concordia’s Centre for Teaching and Learning (CTL).

An associate professor and the now former chair of the Département d'études françaises, Caignon is excited about his new job because, as he points out, the CTL exists to stimulate ideas. 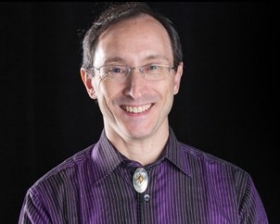 “Teaching is an honour and it’s really fun,” says Caignon. “When you're creative with your approach, it can be a real pleasure. Nowadays there are so many ways to express creativity when you teach there’s no reason not to be completely satisfied with your instruction.”

The new location of CTL was launched in November 2014 for the purpose of inspiring conversation and new ideas about what makes great pedagogy.

The Centre's modern space, located on the sixth floor of the Faubourg Tower (FB), was designed specifically to encourage dialogue and brainstorming. It has two distinct sections: the first is a workplace with room for group projects, one-on-one meetings and solo work, while the second is an active learning classroom with moveable desks and whiteboards enabling teachers to practice non-traditional teaching formats.

In 2014, Caignon was named a 2014 3M National Teaching Fellow, awarded annually to 10 professors from across Canada in recognition of their exceptional contributions to education. In the same year, he was also one of four Concordia professors to earn a President’s Excellence in Teaching Award. Catherine Bolton, vice-provost of Teaching and Learning, says she’s delighted about Caignon’s new role with the CTL.

“We've already benefited from Philippe’s experience as an award-winning instructor,” says Bolton. “His innovative approach to teaching and willingness to mentor fellow faculty are a tremendous asset for both teachers and students.”

In his new role as academic director of the CTL, one of Caignon’s primary responsibilities is to act as a liaison between professors and faculty administrators. As a professor himself, Caignon says he’s in a good position to work with other teachers because he “lives what they live”. He considers the CTL as a “pivotal” resource for improving the quality of instruction at Concordia.

“If a professor is having difficulties, they can come to the CTL where we'll help them analyze what they’re doing right and further improve on it from there,” says Caignon, explaining that the Centre aims to focus on the positives, not to point out what somebody might be doing wrong.

“People can get set in their ways because that's how they've been taught. Our goal is to make them see that they can also think outside the box.”

Caignon began his career at Concordia in 1999. He was chair of the French department for seven years and has acted as the interim academic director of the CTL over the past 12 months.

Now that it's his sole focus, Caignon has plenty of ideas and plans for the Centre.

One thing he wants to do is encourage professors to try out new classroom technology — get them to take risks while allowing room for failure. He believes people can learn a lot by figuring out what doesn't work.

Another one of Caignon's priorities for the upcoming Fall semester is to sit down with each of the university's departments and faculties to discuss their needs, and let them know how the CTL can help them.

“We want professors to experiment in the classroom,” says Caignon. “That's the main reason why the Centre was created.”

Learn more about Concordia’s Centre for Teaching and Learning (CTL).