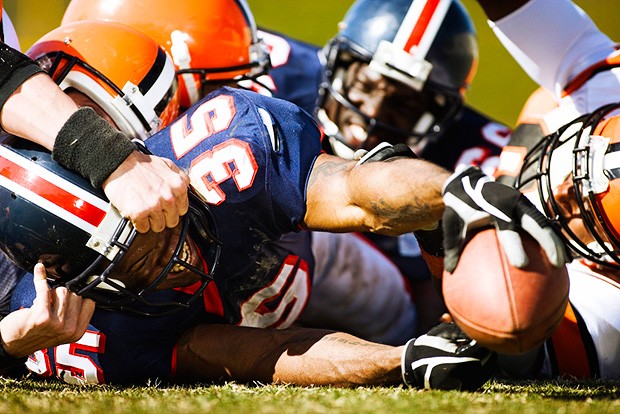 A 245-pound football player is lying on the ground in a patch of AstroTurf on the Loyola Campus, trying to remain completely still while two Athletic Therapy students take his helmet and shoulder pads off.

When they succeed in removing the equipment without causing his neck to move too much — a crucial step when treating suspected spinal injuries — the player promptly gets up, puts his equipment back on and starts the process all over again.

This exercise is part of lab testing being conducted at Concordia’s PERFORM Centre by a pair of researchers looking to discover the best equipment-removal techniques for athletes with potential injuries to the cervical spine, or C-spine for short.

A study with ‘massive potential’

Patrick Boissy, a professor and researcher in Biomechanics and Orthopedic Movement at the University of Sherbrooke, has joined his colleague John Boulay, a Concordia Athletic Therapy professor of 30 years’ standing, at the university to work with 60 fourth-year Athletic Therapy students.

In the course of this study, which focuses on an impact-heavy sport where the average professional career currently lasts slightly more three years, they’re hoping to answer two fundamental questions. First, what’s the best way to stabilize the head and neck of an injured football player, and second, how can shoulder pads be safely removed?

“Regardless of the actual presence of a C-spring injury, protocol calls for immobilization until you’re absolutely sure one way or the other,” says Boissy. That means an injured player needs to remain as still as possible, although exactly how still is a question the two men are hoping to answer.

Boissy and Boulay are using inertial measurement units (IMUs) to measure the angle of a person’s neck relative to their trunk —the greater the degree of the angle, the more potentially dangerous a movement can be.

As Boissy notes, the ideal movement is always less than 10 degrees.

“Considering spinal injuries can result in paralysis or worse, even just a few degrees off can greatly affect the severity of a person’s injuries,” he says. “That’s why using relatively cheap technology to measure motion has such massive potential. We’re still at the testing phase, but the knowledge transfer application of what we're doing is ridiculous.” 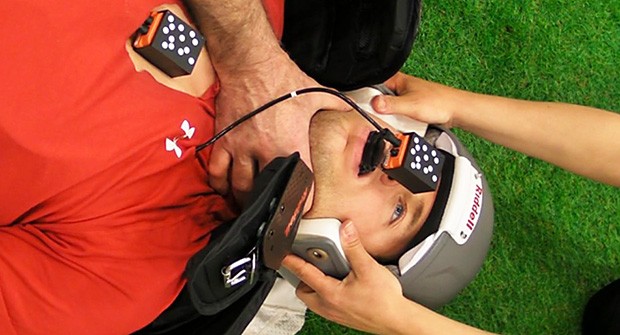 How still is still enough? The researchers are measuring degrees of motion.

The study at the PERFORM Centre comes at a critical time. A few years ago, the paramedic service Urgences-Santé introduced vacuum mattresses — essentially, compression bags that are used to completely immobilize a person with a possible spinal injury.

It used to be the case that paramedics or ER staff were responsible for removing an injured athlete's helmet and shoulder pads, but the change in technology has shifted more responsibility to athletic therapists.

“They need to do it as well as possible without increasing the risk of secondary damage,” says Boissy.

According to certain studies, anywhere from three to 25 per cent of football injuries are actually worsened by movements following the initial impact, although Boissy says the research is still not definitive.

He and Boulay have found that the initial point of contact is often the most dangerous. They do acknowledge, however, that there's very little quantitative evidence to back up most modern claims about sports injuries and the best injury-management techniques.

At the moment, C-spine injuries can only be confirmed at a hospital, via imaging — but a lot of things can happen to an athlete between getting hit and being loaded into an MRI machine.

“It can move from the initial injury to when the therapist is removing the athlete’s equipment, putting him on the board, then transferring him or her from the board to the vacuum mattress,” says Boissy.

“From the vacuum mattress to the stretcher, from the stretcher to the ambulance, or in the ambulance during the transport… We’re trying to address one issue at a time, but we’re aware there are lots of issues.”

An immediate link between research and practice

Boissy and Boulay see their work at PERFORM as the beginning of a long and fruitful research partnership. They want to measure injuries in other sports, as well as all the different positions a person can fall into when injured, and from there, divine the best response techniques.

For his part, Boissy is excited to know that their results will actually be put to use instead of sitting on a shelf somewhere, ignored.

“I know for a fact that the pathways to transferring our research to the practice are clear at PERFORM,” he says. “It’s one of the first times in my career when I know my conclusions will be integrated and actually practiced by someone."