Preventing diabetes at the PERFORM Centre

The study of 36 women diagnosed with gestational diabetes made use of several research platforms at PERFORM, including the teaching kitchen. | Photo by Rani Cruz

For all pregnant women and new mothers, eating nutritious meals and staying active is important for maintaining good health. For women diagnosed with gestational diabetes, it’s even more crucial, as they’re seven times more likely to develop Type 2 diabetes within 10 years of their pregnancy.

The research was led by PERFORM affiliate-research member Kaberi Dasgupta, associate professor of medicine at McGill University and physician scientist at the Research Institute of the McGill University Health Centre. The program was tailored for 36 women who had been diagnosed with gestational diabetes over the last five years. 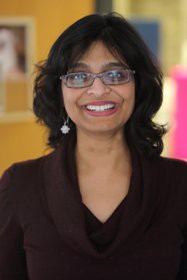 Kaberi Dasgupta will expand her research into gestational diabetes this fall at PERFORM. Photo by Owen Egan

“Before starting the interventions, we talked with participants to find out what kind of study would best fit their busy lives,” explains Dasgupta about the Canadian Institute of Health Research-funded initiative.

The result was four intervention programs at the PERFORM Centre over a 13-week period that combined nutritional education, healthful cooking and exercise classes, as well as a care service for their children so that their partners could also attend.

After the interventions Dasgupta and her team then measured behavioural and biological changes over the period of the study. “Though there was no decrease in body mass, most participants were able to lower sugar levels, blood pressure and insulin resistance as well as improved their insulin sensitivity — all key factors in reducing the risk of diabetes. This was consistent with the reductions in eating out, increases in fruit and vegetable intake, and higher step counts that we observed,” she says.

“Such findings demonstrate that even relatively simple interventions can have an impact on this cohort if they are hands-on and responsive to the needs of participants,” she adds.

One of the main attractions for Dasgupta in undertaking her research at PERFORM was that numerous interventions could take place at the same site. The study made use of the centre’s teaching kitchen, conditioning floor and clinical analysis suite — where in past research Dasgupta would have depended on several venues to access such equipment.

For Louis Bherer, PERFORM’s scientific director, this demonstrates the potential of the centre for the greater scientific and medical communities. “To have an accomplished and respected scientist such as Dr. Dasgupta come from another institution to do her research at Concordia is quite exciting. Our facilities and administration are world class and we aim to be a hub for the best and brightest to undertake research that is making a difference.”

Dasgupta and her team have received funding from the Lawson Foundation to continue her research in gestational diabetes at PERFORM. She and her team plan to recruit 66 families and hope to begin interventions by the end of 2014.