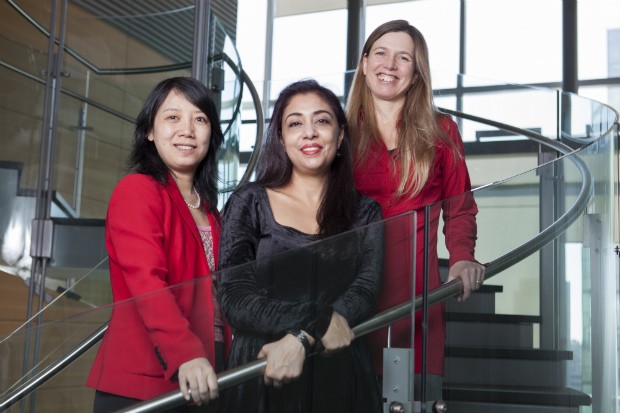 What is Concordia doing right when it comes to supporting women faculty members? What are some of the challenges? And in the next five years, what changes would women like to see happen?

On February 14, more than 40 full- and part-time faculty attended the Women Faculty Summit, a half-day café-style discussion organized by the Office of the Provost to look into these issues.

Over the course of the morning, the summit’s attendees shared their experiences and talked about how working life at the university could be improved. They also tapped into their creative ability to visually illustrate issues and chart multiple pathways to improvement.

A commitment to work-life balance

According to Reilly, the participants highlighted how the university is getting a lot of things right.

“Participants noted that we have daycare and terrific parental-leave policies, as well as support for advancement and the development of female faculty research,” she says.

Kimberley Manning, an associate professor in the Department of Political Science, notes that in 2008 her department came up with a standards document for tenure and promotion in response to the challenges faced by many young faculty members, particularly women.

“We made it very clear that we were committed to work-life balance and recognizing more than one pathway as evidence of significant career accomplishment,” she says.

“A faculty member cannot sustain working 60-hour weeks and remain a fully functioning member of their family or society. This is particularly true for women, given that they often carry a heavier load for caregiving than do men.”

“Since biological clocks are often synchronized with tenure clocks, this collective commitment eased the stress and crushing nature of having young kids while trying to meet tenure requirements. It has also increased faculty possibilities for success.” 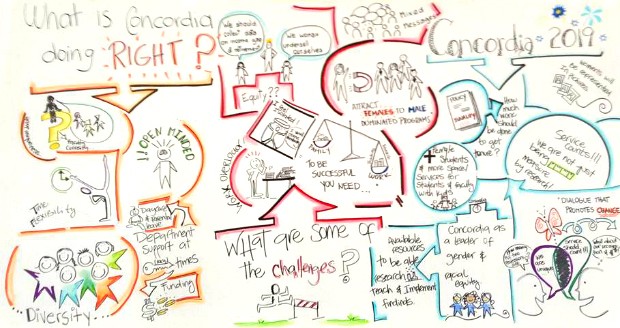 The attendees charted pathways to improvement.

‘The gender equality project is still far from finished’

The February summit’s attendees agree that the male-dominated work culture that pervades society is also present in academia. The belief that individuals should, as they described it, “work until it hurts” leads to unbalanced and unhealthy lifestyles.

Adeela Arshad-Ayaz, an assistant professor in the Department of Education, said that one of the greatest obstacles women faculty members contend with is the false belief they have achieved parity with men, which can lead to inaction.

“While a lot of progress has been made in this respect, the gender equality project is still far from finished. There is still a lot of work to be done to make life equitable for all groups.”

According to Reilly, there’s an added challenge of encouraging greater ethnic and cultural diversity among female faculty. In some cases, she says, women from diverse groups traditionally under-represented in academe can at times feel isolated and excluded.

The summit’s participants had several suggestions on what the university could do to improve the working lives of its women faculty in the next five years.

Manning sees opportunities on several fronts. “I hope that Concordia will have increased institutional support for daycare and faculty mentoring, and will look into adjusting the tenure ethos to recognize a model of multiple paths.”

Reilly agrees that more quality daycare space is a pressing need. She also suggested that a discussion section of the Cspace intranet could be dedicated to the next steps for female faculty members.

Yan, meanwhile, expressed a desire for a more diverse institution as a whole. “I would like to see more young women recruited into programs that have been traditionally male-dominated.”

Like Reilly, Arshad-Ayaz points to the need for a forum where women can discuss the issues they encounter. “I also feel there is a strong need for something more permanent, like a committee on the status of women or a diversity committee.”

Reilly and her colleagues want to continue the conversation. The next Concordia University women faculty event is scheduled for later this year.

Check out what four Concordia leaders had to say about their experiences as women in academia.