December 12, 2016 (Berlin) - At a ceremony held at the Canadian Embassy in Germany, two Dutch Old Master paintings pulled from different auction house sales were presented to the Max and Iris Stern Foundation and its three beneficiaries – Concordia University and McGill University in Montreal and Hebrew University in Jerusalem. Marking the 14th and 15th paintings recovered by the beneficiaries of the Jewish-Canadian dealer and collector formerly from Düsseldorf, the event was held in the presence of The Honourable Melanie Joly, Minister of Canadian Heritage. 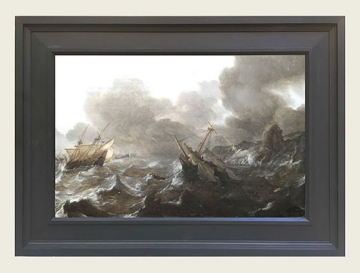 Based on an anonymous tip from within the art trade, the Stern Foundation learned that “Ships in Distress on a Stormy Sea” (download a high resolution version) by marine artist Jan Porcellis (c.1584-1632) was consigned to Auktionshaus Metz in Heidelberg.  Soon after advising the company, contact was made between the German consignor and foundation representatives from the Holocaust Claims Processing Office (HCPO) of the State of New York Department of Financial Services. It was explained that in the Nazi period the work had been sold by force to secure an exit visa for Max Stern’s mother. Thanks to amicable discussions, the work was returned. 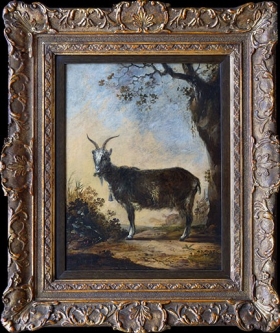 The second painting, “Landscape with Goats”, (download a high resolution version) by animal painter Willem Buytewech the Younger (1625-1670) was consigned by a German collector to Auktionshaus Stahl in Hamburg. News of the sale was flagged by the German Lost Art Foundation which, in turn, had been alerted by the Federal Criminal Police Office (BKA). In the Nazi period the work had been sold in Cologne at a forced auction of Stern’s holdings.  The Hamburg auctioneers connected the consignors with the HCPO, and again thanks to amicable exchanges the work was returned.

Both of these paintings slated for auction in different German cities were listed on various international databases of stolen art. Their recoveries follow news in June of another Stern painting in a German private collection returned with the assistance of Düsseldorfer Auktionshaus.

The preponderance of looted Stern paintings currently held in Germany and often circulating in the art markets has compelled the Foundation to direct considerable efforts in the country.  In most cases, looted works were acquired in good faith after the Nazi period by private collectors. To arrive at fair and just solutions with such individuals in the future, The German Friends of Hebrew University are developing a program to encourage possessors of Stern works to return them in exchange for tax certificates.  It will be the first such initiative ever to be offered to the community of collectors in Germany holding problematic works from the Nazi period.