In Memoriam: Wolfgang and Joanna Bottenberg 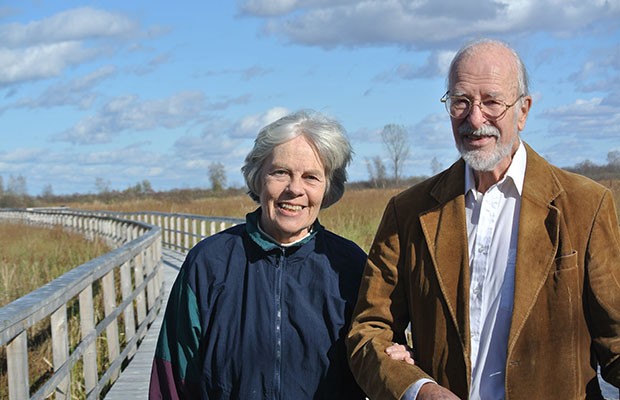 The Concordia community mourns the dual loss of Wolfgang and Joanna Bottenberg, long-time faculty members of the University. Wolfgang passed away on January 16, 2018 and Joanna on February 8.

The Bottenbergs inspired generations of Concordia students, staff and faculty across several programs, including Music, German (Modern Languages) and Political Science. They were active scholars and creators interested in interdisciplinary humanistic conversation, known to many through their participation in Lonergan College and the Scholar’s Circle.

Bottenberg was an esteemed full-time professor in Concordia’s Department of Music from 1973 to 1997.

“He was one of the earliest faculty members of the Department,” says Mark Corwin, Chair of the Music Department.

“Wolfgang helped establish the fundamental position of music composition within our whole pedagogy. His shared passion for music as an active, creative and engaging process is a legacy that continues to this day.”

Bottenberg wrote over 90 compositions for almost every major compositional idiom and form, from choral, operatic and orchestral works to music for chamber orchestra and small ensemble. He also published a two-CD release of the first complete recordings of the compositions of philosopher Friedrich Nietzsche.

“I loved having him as a colleague,” says Allan Crossman, retired faculty member in the Department of Music, who worked closely with Bottenberg for over twenty years.

Both were composers who bonded over teaching harmony and counterpoint. Wolfgang’s compositions were so well-crafted that Crossman would analyze them in his classes.

“It was delightful music. Quite traditional, tonal music with real harmonies and melodies. It wasn’t flashy, contemporary music, but it was beautifully made.”

Together, they built up the skill level of the department and attracted talented students. Bottenberg earned a reputation as an enthusiastic, caring teacher.

“I know that Wolfgang was loved by his students. North American kids took to him,” remembers Crossman. “He had a strong German accent and an old-world sensibility and quality. He wasn’t strict. He was a flexible, warm and congenial person. Sweetest guy you could imagine.”

"When I decided to start university studies in music, I chose Concordia because of Wolfgang. I tried to take the maximum of courses Wolfgang gave, because I knew he had the talent to transmit values that would gradually make me not only a passionate musician but also a human who is constantly curious.”

Bottenberg’s legacy as a composer, scholar and teacher will be preserved in the Wolfgang Bottenberg fonds at the University of Calgary Library.

Joanna Bottenberg received a B.A. in English and German from Thomas More College in her home state of Kentucky, before moving to Ohio to complete her Master’s degree in German at the University of Cincinnati. Pursuing interdisciplinary coursework in aesthetics, drama, and music, she earned a Ph.D. in Humanities from Concordia in 1994.

Bottenberg taught German in the Department of Classics, Modern Languages and Linguistics (CMLL) from 1987 to 2010, and a course for the Political Science Department titled “Creativity and the Politics of Conflict.”

She was well-loved by colleagues. “Joanna and I met in the basement of our then departmental office at the Concordia University Loyola campus, 25+ years ago, when we were both part-time faculty,” reports Catherine Vallejo, former Chair of CMLL.

“I was drawn to her intelligent, curious and warm personality, which showed through all her activities, often brightening our office with her wonderful comments and profound knowledge of German literature and music.”

1996 saw the publication of Bottenberg’s monograph Shared Creation, on the artistic collaboration of poet Hugo von Hofmannsthal and composer Richard Strauss. She presented and published many interdisciplinary essays on poetry, opera and politics, including “Poets and the Public Realm” and “Killing the Sopranos in 19th Century Opera.”

Bottenberg was a valued member in the University Part-time Faculty Association (CUPFA), serving for over a decade as an elected representative of part-time faculty in CMLL and as CUPFA’s representative in the Faculty Council of Arts and Science.

“What you first learned about Joanna was her gentle demeanour,” recalls Maria Peluso, former president of CUPFA.

“Her disposition was stately and elegant. She possessed grace. One could not help but be drawn to her compassionate and understanding ways.”

CUPFA will make a donation to its scholarship endowment in Bottenberg’s name.

Wolfgang and Joanna Bottenberg will be missed by many in the Concordia community. The feeling of appreciation was mutual.

“My father would often speak of Concordia as ‘a real success story,’ and that he was very proud to have been involved in its growth,” their daughter Frances recalls.

“My mother was amazed at the variety of scholarly and pedagogical projects she was able to pursue at Concordia. She grew during her time there.”

On May 19 and 20, Concordia’s flags will fly at half-mast in honour of the Bottenbergs.

On May 20, a celebration of their lives will be held for family and friends. For more information, email bottenbergmemorial@gmail.com.