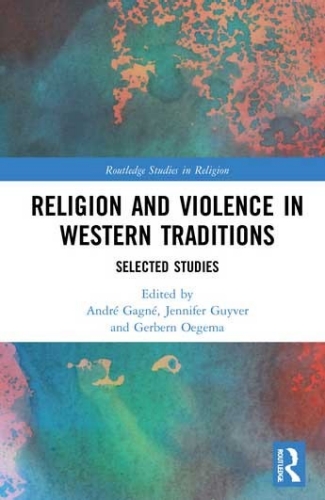 This new co-edited book by Dr. André Gagné examines the connection between religion and violence in the Western traditions of the three Abrahamic faiths, from ancient to modern times. It addresses a gap in the scholarly debate on the nature of religious violence by bringing scholars that specialize in pre-modern religions and scriptural traditions into the same sphere of discussion as those specializing in contemporary manifestations of religious violence.

Moving beyond the question of the “authenticity” of religious violence, this book brings together scholars from a variety of disciplines. Contributors explore the central role that religious texts have played in encouraging, as well as confronting, violence. The interdisciplinary conversation that takes place challenges assumptions that religious violence is a modern problem that can be fully understood without reference to religious scriptures, beliefs, or history. Each chapter focuses its analysis on a particular case study from a distinct historical period. Taken as a whole, these chapters attest to the persistent relationship between religion and violence that links the ancient and contemporary worlds.

This is a dynamic collection of explorations into how religion and violence intersect. As such, it will be a key resource for any scholar of Religious Studies, Theology and Religion and Violence, as well as Christian, Jewish, and Islamic Studies.