The Irish in Canada

Despite the enormous accomplishments of Irish immigrants, detailed knowledge of the integral role they have played in the evolution of Canadian society is scarce and incidental, since few formal studies have been done and records are scattered or missing.

With the profound changes in Canada over the last twenty-five years, many in the Irish population, especially the young, now feel distanced from their heritage, a feeling reinforced by their lack of knowledge of the degree to which their ancestors helped build the Country. The establishment of the School of Irish Studies has offered ongoing and formalized opportunities for students to learn in full this rich history.

How extensive is the Irish involvement in Canadian life?

Although names such as Eaton, O'Keefe and Drummond, as well as individuals such as D'Arcy McGee, Paul Kane, King Clancy, Marshall McLuhan, Morley Callaghan, Max Fergusson, Maureen Forrester and John Crosbie are familiar to most Canadians, detailed formal knowledge of the history of the Irish in Canada is neither readily available nor taught at Canadian universities.

The Irish have been part of the fabric of Canadian society since John Cabot arrived in Newfoundland at the end of the fifteenth century. It is estimated that up to four million Canadians can trace some Irish ancestry, including a high percentage of Frnech-speaking Quebecers. There were significant Irish settlements in Atlantic Canada and Quebec before the Famines of the 1840s sent many more to our shores.

In the 1780s, Corkman Richard John Uniacke became Attorney General of the Colony of Nova Scotia and facilitated the settlement there of many of his countrymen. WhenÂ  Donegal-born Captain Walter Patterson became first Governor of Prince Edward Island in 1781, he renamed the colony New Ireland. This name was also associated with New Brunswick where, by 1871, the Irish constituted a third of the population and wielded significant economic and political power.

When successive waves of Irish immigrants arrived in Quebec in the nineteenth century, many of them orphans whose parents died of typhoid on the transatlantic voyage, they were adopted by French families. Some, such as the families of Claude Ryan, Louis O'Neill, Daniel Johnson and Brian Mulroney kept their surnames, while others such as Louis St. Laurent and Jean Charest remained proud of their Irish heritage. In 1871, Quebec had a higher proportion of Irish-born residents than anywhere else in North America.

Down through the years, the Irish served as an important bridge between the French and English, sharing religion and culture with one, and history and language with the other. Upper Canada Premier, Robert Baldwin forged a liberal alliance with Louis-Hippolyte Lafontaine, thereby securing French-Canadian support for responsible government. Francis Hincks, a native of County Cork, was instrumental in the evolution of the Macdonald-Cartier partnership which would extend a railway from sea to sea, under the direction of another Irish-Canadian, Lord Shaughnessy.

Thomas D'Arcy McGee (1825-1868), an Irish-born politician, accomplished poet and Father of Confederation, who lobbied for responsible government with full protection for the French and the Irish.

Timothy Eaton (1834-1907), born in Co. Antrim, who emigrated to Canada at the age of 20 with total assets of a hundred pounds. His little dry goods store on the corner of Yonge and Queen became the foundation of a great retail organization serving all of Canada.

Robert Samuel McLaughlin (1871-1972), founder of the McLaughlin Carriage Company, the forerunner of General Motors of Canada, was a prominent industrialist and philanthropist who made significant contributions to the advancement of Canadian culture and society.

Nelly McClung (1872-1951) was a social activist in Manitoba and Alberta, the only woman at the Canadian War Conference of 1918, the first woman member of the CBC's Board of Governors, and in 1938 a Canadian delegate to the League of Nations. While raising a family of five, she was a novelist, temperance advocate, suffragist, lecturer and member of the Alberta Legislature.

The life of Cardinal J. C. McGuigan (1894-1974) might be seen to reflect the pervasive presence of the Irish in Canada: born and educated in Prince Edward Island, he completed his post-graduate work at Quebec City's Grand Seminaire and Universit Laval. He served as priest in Edmonton, Archbishop of Regina, Archbishop of Toronto, and later still as first Cardinal from English Canada.

The Canadian Irish Studies Foundation welcomes your tax-deductible contributions, no matter how modest, to help achieve these goals. Your support will help to teach students and the general public about the culture of Ireland and the rich history of the Irish in Canada.

Please send your donation to:

You can also donate online by clicking the Donate button below. 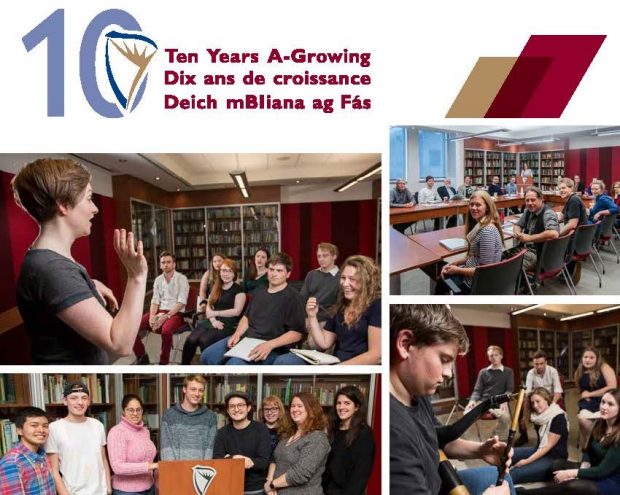