Alain Beaudet and B. Mario Pinto: How will university-based research be transformed in the next decade? 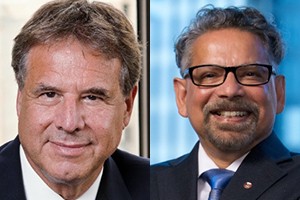 Dr. Alain Beaudet, MD, PhD, is president of the Canadian Institutes of Health Research (CIHR). In this role, which he assumed in July 2008, he acts both as chair of the Governing Council and CIHR’s CEO.

Before joining CIHR, Dr. Beaudet was president and CEO of the Fonds de la recherche en santé du Québec (FRSQ), a position he held since 2004.

Dr. Beaudet has led a distinguished career at the world-renowned Montreal Neurological Institute (MNI). He headed the institute’s functional neuroanatomy laboratory, pursuing basic research into the action mechanisms and role of neuropeptides in the central nervous system, the control of intracellular receptor trafficking and its involvement in neuron signalling and new pain therapies.

From 1985 to 1992, Dr. Beaudet was associate director (research) at the MNI. He has also taught in McGill University's Departments of Neurology-Neurosurgery and Anatomy-Cell Biology. He has authored more than 175 original articles and 40 monographs and book chapters.

Dr. Beaudet has received numerous grants and distinctions, including the Killam postdoctoral fellowship, grants from the Medical Research Council (MRC), CIHR and FRSQ, and the Murray L. Barr Junior Scientist Award. In September 2004, he was awarded the Prix Adrien-Pouliot by the Association francophone pour le savoir (Acfas).

He served as president of the Canadian Association for Neuroscience from 1995 to 1997 and has been a member on many peer review committees, both in Canada (FRSQ, MRC) and elsewhere (National Institutes of Health, Human Frontier Science Program).

In 2007, France bestowed the Order of Academic Palms distinguished Officer's award to Dr. Beaudet. He was made Doctor honoris causa of Université Pierre et Marie Curie.

In 2011, he became a Knight of the National Order of Quebec, the highest honour awarded by the Government of Quebec. In 2012, he was awarded the Australian Society for Medical Research Medal and toured seven Australian cities as a keynote speaker to highlight the importance of patient-oriented research and illustrate how research and development can be used to face the health needs of aging populations and indigenous people.

He was also inducted as a Fellow of the Royal Society of Canada. In 2013, he received a Doctorat Honoris Causa from the Université de Sherbrooke.

Dr. Beaudet earned a medical degree and a PhD in neuroscience from the Université de Montréal. He did postdoctoral training at the Centre d'études nucléaires in Saclay, France and the University of Zurich's Brain Research Institute in Switzerland.

B. Mario Pinto was appointed president of the Natural Sciences and Engineering Research Council of Canada (NSERC) in November 2014.

He brings a strong dedication to building communities that link the business ecosystem to research innovation. He brings his personal ethos and creative tools to NSERC along with a vision for a more fluid, multidisciplinary approach where Canada plays a greater role in the competitive global research environment.

Before joining NSERC, Pinto held a number of senior research and administrative positions at Simon Fraser University spanning over 30 years, including professor of chemistry, chair of the Department of Chemistry from 1999 to 2004, and vice-president of Research for two terms lasting 10 years.

As a chemical biologist, Dr. Pinto has made a scholarly impact through publishing on a variety of interests with implications for the diagnosis or treatment of bacterial and viral diseases, Type 2 diabetes, and cancer. Among his achievements, he has received the Montréal Medal (2014) of the Chemical Institute of Canada, the Alfred Bader Award (2013), and R.U. Lemieux Award (2012) of the Canadian Society of Chemistry. He is a Fellow of the Royal Society of Canada.

Pinto has a proven track record as an advocate of science and innovation serving on many external boards, councils, and committees, including acting as Canada’s representative to the International Carbohydrate Organization and President (2006-2008). He also served as the University Delegate to NSERC and the Social Sciences and Humanities Research Council of Canada, the President of the Canadian Society of Chemistry (2010-11), and the Vice-Chair of the Chemical Institute of Canada (2014).

Pinto received his Bachelor of Science (1975) and PhD in Chemistry (1980) from Queen’s University. He did his postdoctoral work at Le Centre national de la recherche scientifique in France as well as the National Research Council Canada.