Researchers at Concordia are studying the potential applications of a type of compound called metal–organic frameworks (MOFs). They have designed a new kind of microscopic structure that can rapidly mitigate chemical weapons when exposed to ultraviolet light.

MOFs are artificially created hybrid networks of metal clusters bound to each other by organic linkers called ligands. They are usually open-faced and porous, sometimes described as sponge-like. They are extremely versatile, depending on the kinds of materials involved, and they can be used in a wide variety of applications from water remediation to drug delivery.

One such MOF is the topic of a new paper by PhD candidate Victor Quezada-Novoa and Ashlee Howarth, an assistant professor of chemistry and biochemistry and Concordia University Research Chair in Metal-Organic Frameworks in the Faculty of Arts and Science. In it they report on the design and synthesis of a new MOF composed of the rare-earth metals yttrium and terbium, bound with an organic linker. They named the structure RE-CU-10 (RE = rare-earth, CU = Concordia University).

The researchers published their findings in the journal Chemistry of Materials. Hatem Titi of McGill University and Amy Sarjeant at Bristol Myers Squibb co-authored the paper. 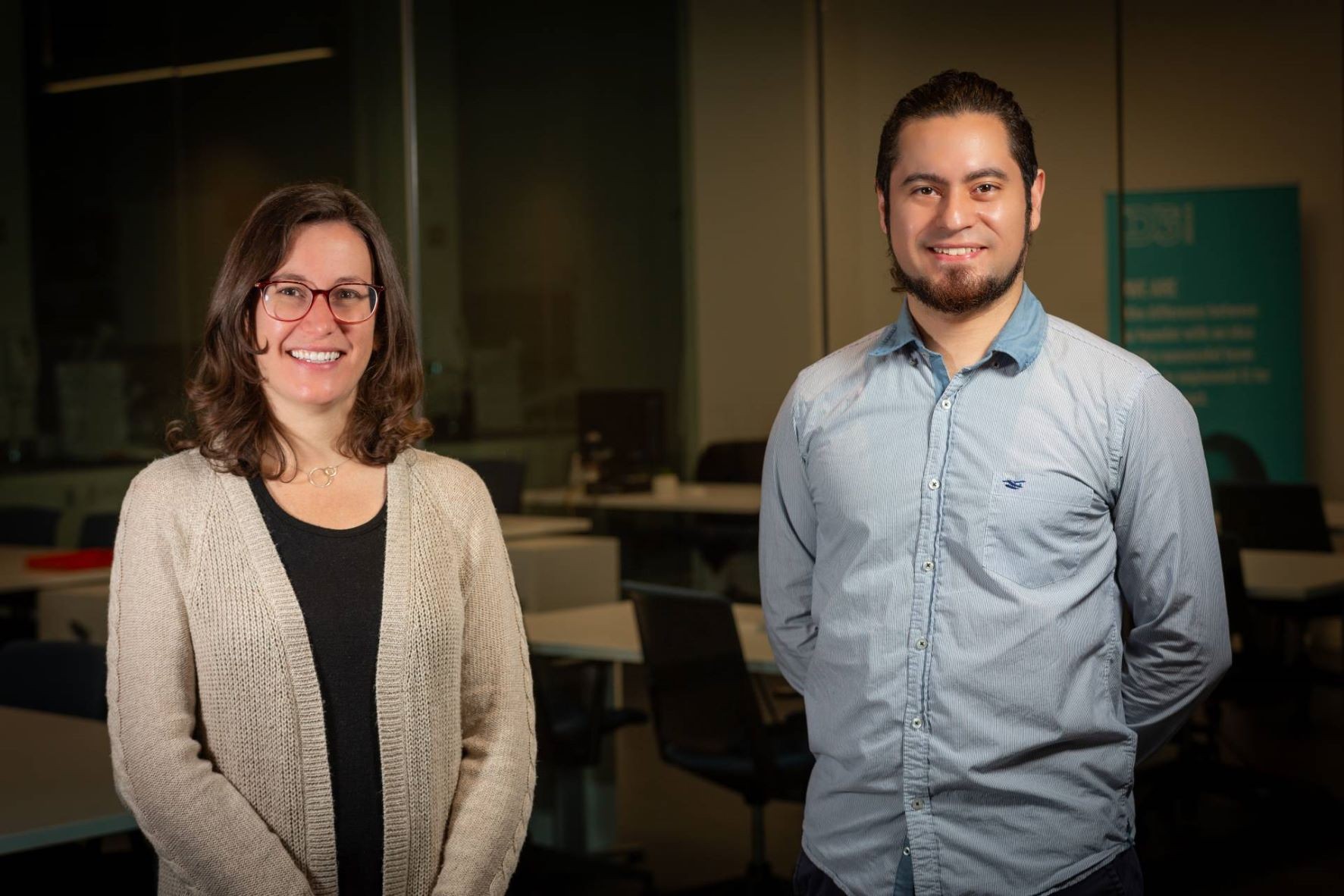 Ashlee Howarth and Victor Quezada-Novoa: “We hope one day to test this metal–organic framework in a military laboratory setting.”

Lead author Quezada-Novoa says the linker, a rectangular tetratopic pyrene-based ligand, has a particular core that interacts with ultraviolet light, producing an exceptionally reactive, though short-lived, oxygen species that causes a change in the chemical warfare agent sulfur mustard. It’s better known as the infamous World War I blistering agent mustard gas and is still stockpiled and in use today.

Working at the Howarth Lab at Concordia, Quezada-Novoa suspended his MOF in a small glass vial containing a millilitre of methanol. After adding 23 microlitres of the sulfur mustard simulant and exposing the vial to a UV LED photoreactor, the researchers found that the MOF effectively oxidized — and thereby detoxified — the chemical warfare agent simulant. The process took about 15 minutes, achieving 50 per cent conversion to the less toxic product in only three and a half minutes.

“We demonstrated that the material we synthesized works very quickly and is in fact one of the fastest catalytic materials to be reported using this reaction setup,” Quezada-Novoa says.

“It has the potential to be scaled up and we hope one day to test this MOF in a military laboratory setting. That is our goal, given that there remain thousands of litres of stockpiled sulfur mustard around the world.”

Howarth points out that Quezada-Novoa’s work is distinct from other research into MOFs because it relies on rare-earth metals, elements found worldwide including in northern Canada, that have vital industrial uses, from smart phones to missile guidance systems.

“Researchers have looked at using MOFs to neutralize chemical weapons before, but they have never used rare-earth MOFs with multinuclear cluster nodes,” Howarth explains. “Victor developed a brand-new material with specific features that are different from any of the MOFs used before.”

Adaptable to many needs

Metal-organic frameworks and their various applications are the general research theme at the Howarth Lab.

“Every student in the group is targeting a different end goal,” she says. “And while they are exploring different directions in their research, they are all working on these molecular structures that we can tune and design into almost any type of chemistry we want depending on the final application.”

This study was made possible with support from the Natural Sciences and Engineering Research Council of Canada.

Read the cited paper: “Building a shp: A Rare-Earth Metal–Organic Framework and its Application in a Catalytic Photo-oxidation Reaction.”