From aircraft to automobiles, the new 4TH SPACE exhibit shines a light on the dynamic work of the Society of Automotive Engineers
|
By Meagan Boisse

Allison Miller: “This is a fantastic opportunity to demonstrate what we can offer Concordians, and what hands-on work can produce.”

Starting today, car aficionados and other curious onlookers can get a sneak peek under the hood of Concordia’s Society of Automotive Engineers (SAE), the student-run chapter of the international engineering network.

Timed to coincide with Montreal’s Grand Prix Festival, the exhibit highlights some of the society’s most fast, furious and sustainable creations, from aircraft to automobiles.

“We’re so excited to show off some of the amazing things that we, as students, have built over the years,” says Allison Miller, Concordia SAE’s vice-president of marketing.

“We’re a hard-working, passionate engineering society focused on student involvement, and this is a fantastic opportunity to demonstrate what we can offer Concordians, and what hands-on work can produce.”

The VROOM showcase will include various components, prototypes and vehicles from each of SAE’s subgroups: Aero Design, which builds airplanes; Baja, which makes off-road vehicles; Formula Combustion, which builds a model F1 race-car; Formula Electric, which is developing an all-electric model formula car; and Supermileage, which works on fuel-efficient vehicles. 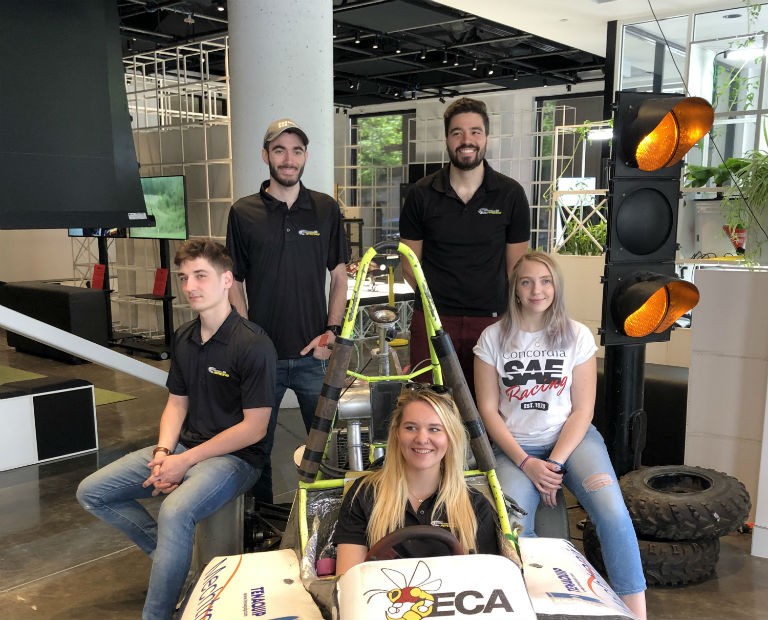 “SAE is all about giving students the chance to apply what they’ve learned in the classroom to real life by designing and building actual prototypes for competition and more,” says Miller.

She adds that summer is an especially exciting time to shine a light on the society, as competition season is now in full swing.

“There are hundreds of SAE chapters across the globe, and they all come together to duke it out at giant international competitions throughout the year; our Baja team just left for a competition in Rochester, New York, and our Formula Combustion team is leaving for Lincoln, Nebraska towards the end of June!”

While most students involved in SAE study engineering, Miller points out that the society is open to all Concordians.

“I’m going into my third year in marketing and political science, and deal with the business and marketing side of SAE. No matter your background, if you’re passionate about building things, you have a place with SAE.”

Find out more about Concordia SAE, VROOM: Concordia Grand Prix Summer Garage and don’t hesitate to reach out via Facebook or Instagram.