Carly Ziter: “Once you have a certain critical mass of canopy, then each tree becomes more important when it comes to cooling temperatures.”

The idea of the heat island — that densely built-up urban areas are considerably hotter than the rural and semi-rural landscapes that surround them — has been extensively studied and is widely accepted by academics and the public.

But a new study by a Concordia researcher takes a closer look at the phenomenon and what can be done to mitigate it. According to Carly Ziter, an assistant professor of biology in the Faculty of Arts and Science, extensive tree canopy cover in an urban area can dramatically reduce the temperatures of their immediate environs — enough to make a significant difference even within a few city blocks.

In a new paper published in the journal Proceedings of the National Academy of Sciences of the United States of America, Ziter argues that there is a non-linear relationship between canopy cover and temperature reduction: when canopy cover reaches a certain threshold, temperatures will begin to drop far more dramatically than they do below that point.

“We found that to get the most cooling, you have to have about 40 per cent canopy cover, and this was strongest around the scale of a city block,” she says. “So if your neighbourhood has less than 40 per cent canopy cover, you’ll get a little bit of cooling, but not very much. Once you tip over that threshold, you really see large increases in how much you can cool areas off.”

She adds that the difference between areas with heavy canopy cover and those that are treeless can be as high as four or five degrees Celsius, even within just a few hundred metres of each other.

The effects of shading contribute to that decrease but are not the only factor.

“Trees transpire,” she explains. “They give off water vapour, almost like a little air conditioner.”

This transpiration occurs mainly during the day. Her research shows that during nighttime there is a much smaller difference in temperature between areas with significant canopy cover and those without. 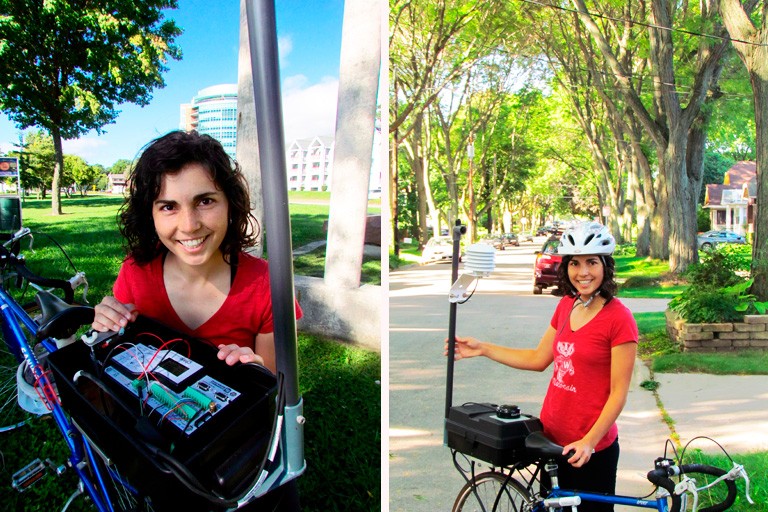 Carly Ziter, an assistant professor of biology in the Faculty of Arts and Science.

To get her readings, Ziter — at the time completing her PhD at the University of Wisconsin-Madison — and her colleagues built small, battery-powered mobile weather stations and mounted them on bicycles. They would cycle around the city taking readings every second, translating roughly into every five meters. This data allowed them to do a fine reading of what the temperature was at specific locations throughout the city and compare this to the amount of tree canopy, pavement and built structures present.

Their method gave them enough high-quality, real-time data to allow them to carry out fine-scale studies of the relationship between tree cover, impervious surface cover and temperature.

“By doing this over the course of a summer, we found that temperatures vary just as much within the city itself as they do between the city and the surrounding countryside,” she says. “We’re not seeing so much of a ‘heat island’ as a ‘heat archipelago.’”

Ziter believes her findings can have an impact on public policy and planning. She says that planting efforts would most effectively reduce temperatures in neighbourhoods that are near the 40 per cent threshold, and that urban authorities need to work to keep what tree canopy already exists.

However, she also notes that the leafiest areas tend to be disproportionately in wealthier neighbourhoods. She would like to see planting distributed more equitably as well as rationally.

Planting trees in lower-income neighbourhoods would not only help lower temperatures, it would also contribute to the physical and mental health of the people living there.

“We know that something as simple as having one nice big tree nearby can have a huge host of benefits on people who live in the city,” she says.

“Once you have a certain critical mass of canopy, then each tree becomes more important when it comes to cooling temperatures. That has serious implications for how we design our cities and plan our neighbourhoods.”

Ziter's research was recently featured in a video by the National Science Foundation:

Learn how Concordia’s graduate programs can help you reach your academic and professional goals.