Amanda Dawn Christie will use the world’s most capable high-power, high-frequency transmitter to send art around the world and into outer space
|
By Meagan Boisse

In the shadow of Mount Sanford, surrounded by Alaskan wilderness, you’ll find the most powerful radio transmitter on earth.

It was designed by the United States military, and transferred in 2015 to the University of Alaska Fairbanks, to study the powerful potential of the ionosphere — an electrically charged layer of the earth’s atmosphere.

On this remote site, scientists use a unique tool called the Ionospheric Research Instrument (IRI) to create radio-induced aurora, also known as airglow. But it’s never been used by a Canadian artist to transmit art — until now.

The IRI’s man-made northern lights inspired interdisciplinary artist Amanda Dawn Christie to create Ghosts in the Air Glow: an upcoming transmission art project that will use the IRI to play with the liminal boundaries of outer space.

“I was so fascinated by these airglow experiments — and the relationship between the ionosphere and radio communications — I felt compelled to create an artwork specific to the site and its history,” says Christie, assistant professor in Concordia’s Department of Studio Arts. 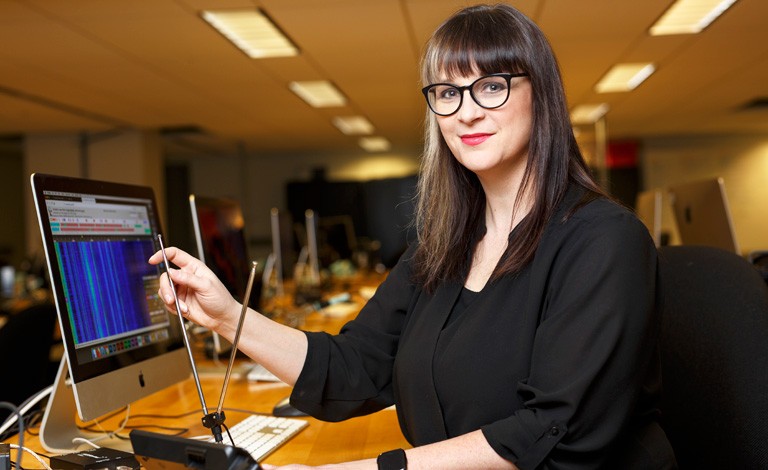 She will be embedding her own encoded SSTV images, audio compositions and propagation tests into IRI experiments from March 25 to 28.

“The facility, which was used by the military, has an air of mystery about it and has been the subject of many conspiracy theories over the years — that’s something I reflected upon when creating the piece.”

Ghosts in the Air Glow will consist of an hour-long transmission containing eight movements, each created for a specific frequency and intended to explore different concepts related to radio science and the HAARP site itself.

Embedding ‘ghosts’ into the airwaves

The common thread weaving each segment together is the idea of the “ghosts,” or rather the esoteric activity that inhabits our airwaves, says Christie.

She explains that when radio was first discovered in the 1800s, spiritualist movements of the era believed the souls of the dead occupied the electromagnetic (EM) spectrum.

“Radio communications are all around; they’re an invisible force constantly moving through us. I liked the connection made by 19th-century spiritualists between matter, energy and EM waves on both a poetic and metaphorical level,” Christie adds.

“By embedding images and sounds into the airglow, I’m also in a way embedding my own ‘ghosts’ into the EM spectrum, an unseen yet highly active realm.”

Ghosts in the Air Glow is officially the first Canadian-funded project to take place at HAARP. | Photo courtesy of UAF

Space: a meeting ground for art and science

The idea for the project came about when Christie met Christopher Fallen, the chief scientist at HAARP, at a hackers conference earlier this year. Fallen, who is an amateur radio operator, was intrigued by Christie’s proposition to use the IRI to create site-specific transmission art.

He agreed to open the facility to her, and when she gained backing from the Canada Council for the Arts, Ghosts in the Air Glow officially became the first Canadian-funded project to take place at HAARP.

“Art and science are often seen as separate efforts but they actually share many of the same inspirations and techniques. I’m excited to see HAARP, a unique scientific instrument, used for a comparably unique artistic performance,” says Fallen.

“Amanda’s project will be a valuable contribution to the 50-year collection of scientific work in the field of ionosphere radio modification, and also to the brand new collection of artistic work using powerful high-frequency radio transmitters and the upper atmosphere — it’s art directed from the ground but created in space!”

Ghosts in the Air Glow will transmit one hour per day between March 25 and 28 and will be received and decoded by amateur radio operators with both traditional analogue and software-defined radio equipment across the world. However, for those among us who aren’t radio experts, the transmission will also be streamed live online.