At a time when researchers feel mounting pressure to produce and publish their findings more frequently, the temptation to cut corners can be great.

That’s why the Centre for Research in Human Development (CRDH), one of Concordia's 21 Senate-recognized research units, recently created the Scientific Citizenship Awards — a new honour that recognizes exceptional ethical behaviours in student research.

Erin Barker, associate professor of psychology in Concordia’s Faculty of Arts and Science, announced the two award winners — as well as two honourable mentions — at the CRDH’s annual conference earlier this month. Barker and associate professor of psychology Kristen Dunfield reviewed the nominations, all of which displayed a variety of scientific citizenship behaviours.

“What was clear from the letters we received from supervisors, as well as from peers, was that these students had gone above and beyond and done exceptional things for other people in the CRDH community,” Barker says. 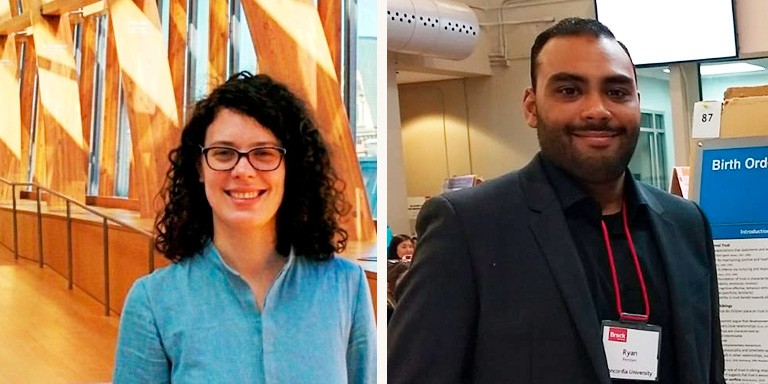 Described by Barker as a leader in her lab, Schott earned recognition for developing an informal yet structured course on R programming language for her colleagues. Her efforts included running a two-hour weekly session for two terms, where she answered any questions her peers had about the software environment.

“This wouldn’t have been possible without the super motivated undergraduates we have in our lab,” Schott says. “They were willing to spend a lot of time to learn the statistical programming language R, and I was there to help them when they got stuck.”

Schott realizes that many of the lab’s undergraduate students will eventually pursue careers outside of academia. By giving them access to learn a programming language, she hopes they will become better problem solvers, which will help them approach new challenges head-on.

“It’s great to share knowledge, advocate for open science practices and encourage others to learn skills like programming,” Schott adds.

“It’s important to also be open to talking to people about the struggles that come along with being in grad school. I’ve benefited a lot from people being open with me about the challenges they face, and I try to do the same for my peers.”

‘Conducting research is not an isolated process’

For Persram, winning a Scientific Citizenship Award was both surprising and humbling. In his recommendation letters, many people described him as the go-to colleague for any questions on statistics, study design and life in general.

“I learned early on in my graduate studies with Nina Howe that conducting research is not an isolated process,” he says. “Research not only requires collaboration — we learn from others when we don’t know what to do or how to do something.”

In Persram’s opinion, good scientific citizens need to be humble, open to feedback and motivated to help others. While he doesn’t expect the award to have an impact on his research, it does provide him with greater motivation to continue his work on multi-family conflicts and the alliances that form during disputes.

“Both of these labs offer collegial environments that promote collaboration between members,” Persram says. “They’re both great opportunities to connect with colleagues to exchange ideas and share novel strategies for how to tackle research and life problems.”