Mathieu Murphy-Perron: “A crucial historical moment that deserves to be heard, remembered and honoured.” | Photos by Jaclyn Turner

A new theatre production by Concordia alumni will bring a watershed historical event to the stage for the first time. Blackout: the Concordia Computer Riots tells the story of the Sir George Williams Affair, one of Canada’s most significant moments in race relations — and the play will be performed in the very building where the original protest occurred 50 years ago.

“I was a student at Concordia, but I didn’t know much about the events that took place,” admits Michelle Rambharose (BFA 16), a writing contributor and actor in the production.

“The more that I uncovered, the more that I felt a deep connection. Themes in the play are rooted in who I am as a person — a Montrealer, a first-generation Canadian, a person of Caribbean origin and an anglophone.”

The incident took place at Sir George Williams University, one of Concordia’s founding institutions, in the winter of 1969, after six West Indian students accused their professor of racial discrimination.

Students occupied the computer labs on the ninth floor of the Henry F. Hall (H) Building to protest institutional racism and the university’s mishandling of the situation. What began as a sit-in ended in arson, $2 million in damages and 97 arrests.

At the time, it was the largest student uprising in Canadian history and it set a precedent for student activism at the university in subsequent years. 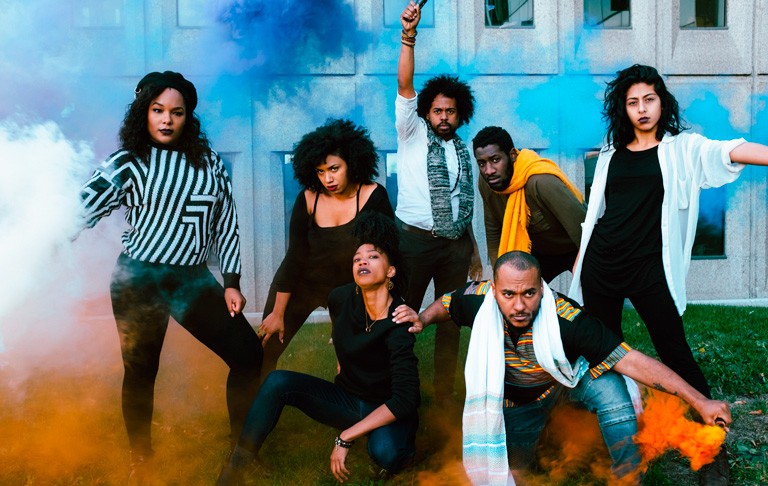 Blackout is directed and produced by theatre alumnus Mathieu Murphy-Perron (BFA 08). "While I was at Concordia I was very involved in student organizing," he recalls.

"The legacy of the computer centre protest was something that was instilled in me early on."

Fourteen years ago, Murphy-Perron co-founded Montreal-based Tableau D’Hôte Theatre, which is staging the production. He saw a tremendous opportunity with the 50th anniversary to bring the historical moment to the stage.

“Our theatre has decided to focus on stories rooted in people, places and moments in the history of the nations upon nations we call Canada,” he says. Murphy-Perron approached Rambharose and other artists in December 2017 and the idea flourished among a growing group of creators through a series of writing workshops.

Blackout actor Sophie-Thérèse Stone-Richards (BFA 18) also shared a connection to the project. The 2018 Concordia valedictorian describes the experience as “coming full circle: it being the 50th anniversary, being a Concordia grad, being of Caribbean descent. There’s something quite wonderful about being a part of this story.”

Murphy-Perron acknowledges the significance of place in more ways than one. Half a dozen of the cast and crew in the production are Concordia alumni or current students.

“It was important for me to have recent graduates and Concordia students for some of the roles,” he says. “I wanted to have a breadth of experience on stage.”

The process reflects the product

Murphy-Perron's collaborative approach allows all cast and crew members to explore their connection to the space and story in a receptive environment.

“I came in acknowledging that if there are ideas around the table I am open to hearing them, being challenged and reaching a consensus together moving forward."

Collaboration of this nature is rare in mainstream theatre, notes Rambharose.

“It was actually essential to a project like this, which is based on a story about collaboration. What’s remarkable is that the process is, in a way, trying to reflect the product.”

For Murphy-Perron, the theatre is the perfect environment to connect with this history of protest. “There’s never been anything quite like it on a Montreal stage. It is a reimagination of a crucial historical moment that deserves to be heard, remembered and honoured.”