Vincent Meessen. Blues Klair is on view from November 17 to February 23
|
By Renée Dunk

Concordia will host the first Canadian solo exhibition of the Belgian artist Vincent Meessen, whose practice explores colonial modernity by excavating the past. Vincent Meessen. Blues Klair, a project developed around the “colour of history,” will be on view at the Leonard and Bina Ellen Art Gallery from November 17, 2018, to February 23, 2019.

Meessen’s filmic installation Ultramarine will feature prominently in the exhibition. It spotlights Kain, an exiled 1960s-era African-American poet and performer widely cited for his influence in the development of rap. Gallery director and curator Michèle Thériault explains that several other elements linking Meessen’s work to Montreal will also be woven through the exhibition.

“When creating the show, Meessen felt that Ultramarine could echo with the local context,” she says. “All of his projects develop intricate relationships with the history and culture of their context of exhibition.”

To that end, the Blues Klair show also excavates the archive of Patrick Straram, an exiled French author linked to the International Situationists. Straram lived freely in the city as a poet, actor, music and film critic, and worked on an unfinished literary project, Blues Clair.

Meessen links the blues of Straram’s trajectory to that of Kain’s exile in Amsterdam. He further connects it to a local event that marked the struggle for emancipation of black and Caribbean people in Canada. In 1969, a student protest against racism took place at Sir George Williams University, one of Concordia’s two founding institutions. The incident culminated with the occupation of the computer centre, intervention by the police and mass arrests.

“Parallels are drawn between the figures of Kain and Straram, both exiled and both committed to singular political poetic practices,” Thériault explains. 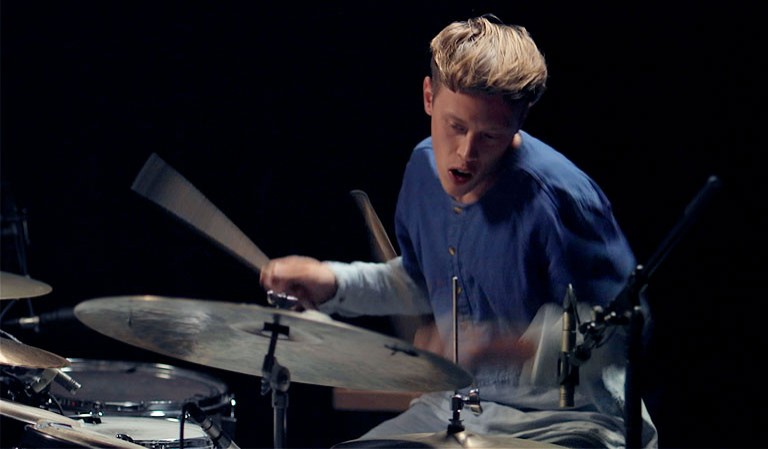 Thériault notes that the links drawn by Meessen in Blues Klair are done subtly through forms, evocations and images.

“The installation is surrounded by a structure of suspended textiles of different hues, and the film is experienced through these layers of chromatic blues,” she says. “Meessen is asking us to look at history through colour and in particular the colour blue. It isn’t an exercise in colouring history but rather to read history starting from colour and thus differently.”

Visitors to the gallery during the run of Vincent Meessen. Blues Klair will be invited to journey through various individual and collective narratives with strong political and cultural overtones, making their connections through visual and text-based elements. They will experience the exhibition through a layered blue filter present in the film installation Ultramarine but also in the bluish lighting, in some works printed in blue and in display furniture painted blue.

“One of the exhibition’s underlying narrative is black emancipation in its references to Black Power and the Black Arts Movement, in its integration of black figures such as Kain the poet and the students impacted by the computer centre occupation, whose lives intersected with those movements back in the 1960s and ‘70s,” says Thériault.

“Those movements, as we know them, resonate deeply today in the continued struggle for a truly free existence for people of colour.”

The vernissage for Vincent Meessen. Blues Klair takes place on November 17 from 3:30 to 5:30 p.m. at Concordia’s Leonard and Bina Ellen Art Gallery (1400 De Maisonneuve Blvd. W.). Vincent Meessen will give a talk at 4 p.m.