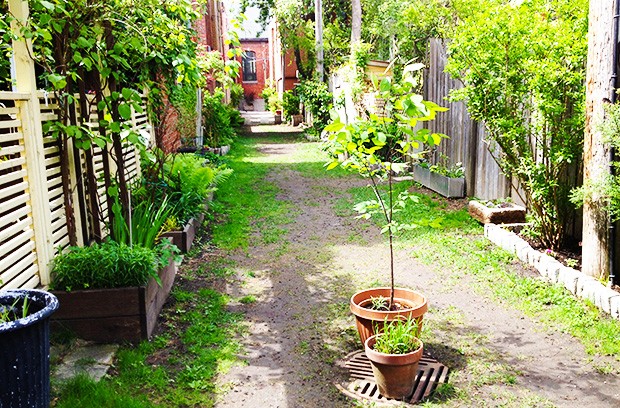 Introducing a green, grassy alleyway instead of asphalt between apartment buildings can cool off the immediate vicinity considerably. | Photo by Tim Beatley, Biophilic Cities Project.

Heat islands can cause certain city blocks to be far hotter than the city’s reported overall temperatures. The effect on buildings can be enormous, creating rapid demands on air conditioning and other systems that consume lots of energy.

Under the supervision of Fariborz Haghighat, a professor in the Department of Building, Civil and Environmental Engineering, two undergraduate students, Michael Torjan and Dave Olsthoorn, are hoping to create a predictive tool that can help municipalities better strategize how to reduce the impact of urban heat islands. The students’ work was supported by the Natural Sciences and Engineering Research Council of Canada’s summer scholarships program and the CREATE program.

In the summer of 2014, the students used pre-existing data that measured the indoor temperature of 55 buildings in Montreal and created a model that would predict future temperatures in buildings based on surrounding neighborhood characteristics.

During an early September heat wave, they tested this model and were able to predict building temperatures within 1.5 degrees. “Until now, municipalities are measured as a whole when it comes to how much heat they give off,” Olsthoorn says. “But as we know, neighbourhoods can be vastly different from one another. Things like green space, wind and proximity to water act as variables. That’s why it’s important to create tools that can gauge heat on a more local scale.”

The students’ study looked at how buildings were affected by surrounding neighbourhood characteristics: the presence of vegetation (grass and trees), other buildings, water and pavement. The reflectance of each of these surfaces was measured. In addition to taking into account this data, the other most significant factor was — not surprisingly — the sun.

The study now makes it possible for municipalities to better understand the possible effectiveness of urban-planning strategies that aim to mitigate heat islands. For example, introducing a green, grassy alleyway instead of asphalt between apartment buildings can cool off the immediate vicinity considerably. The study has clearly shown the impact of vegetation on a city block.

“I am impressed by the quality of the students’ work, and I think this research has huge potential in helping make our cities far more pleasant places to live in the summer,” Haghighat says.