I was greatly saddened to learn of the passing of Dennis Murphy last month. As many noted at his November 26 memorial at Concordia, Dennis had a vivid and unusual sense of humour, and was an incredibly supportive colleague. 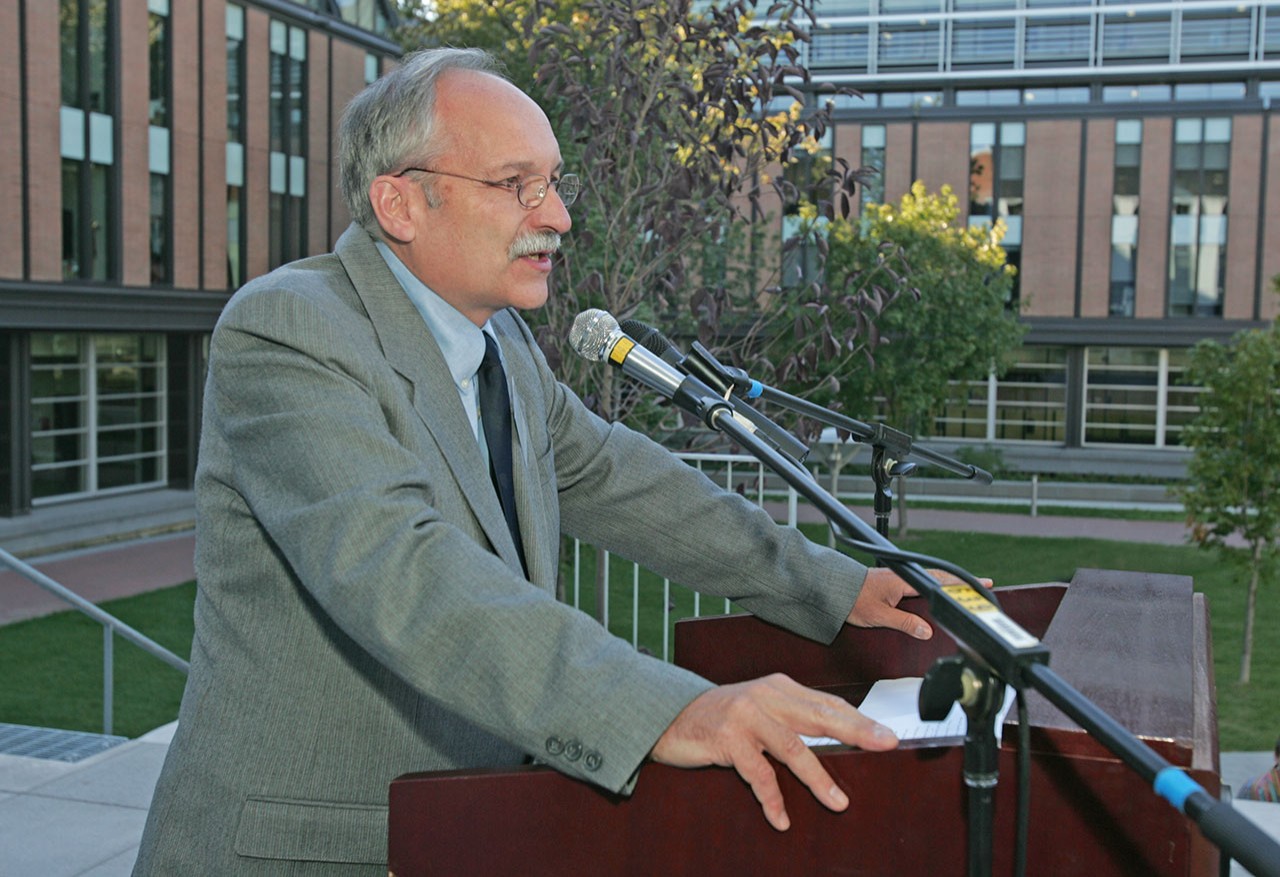 Dennis Murphy at the 50th anniversary of Concordia's Department of Communication Studies in 2015.

I had but one class with Dennis. It was a spring session course, an all-day seminar in Media Ethics that ran most of the day Saturday. That meant we were all there in the morning, something none of us wanted to do. But Dennis made it worth it. He was lively, open-minded, full of odd bits of information and had an off-kilter way of looking at the world.

At one point, Dennis was telling the class a story, and it was going on rather long. I could tell everyone was pretty much losing the thread of what he was saying. I piped up: "It's been another Dennis Murphy Moment. We don't entirely understand what you just said, but we appreciate it anyway."

Everyone laughed, but Dennis was laughing the hardest. A couple of weeks later, he was pontificating about something, and then paused. He looked at me and asked, "Is this another Dennis Murphy Moment?" The seminar had its own running gag.

But Dennis did something incredibly profound for me in 1998. In that year, the Department of Communication Studies decided to clamp down on those of us who were taking forever to complete our master's degrees. It was entirely understandable, but I felt like I was in a terrible bind: then writing for the (sadly now defunct) weekly Mirror and freelancing for The Globe and Mail (among a bunch of other places), I was getting exactly the kind of work I wanted in the incredibly competitive field of journalism. Dennis often emailed me to comment on my work and had me into his classes to discuss the work I was doing — articles I had written and appearances I'd made in various media, including TV and radio. Truth is, at the time I barely had time to think, let alone finish a graduate degree.

The department had sent me a letter, telling me I had to come up with a plan to finish the MA in a certain time frame, or I'd be kicked out. I went directly to Dennis's office in a panic.

What Dennis did then transcended the act of a professor and entered into the realm of mentorship. He sat me down, went over my transcript with me carefully, mapping out precisely what I needed to do in order to complete the degree. He asked me about a book idea I'd told him about previously — a series of interviews with LGBTQ filmmakers — and said, "Right. That's your thesis project!" He intervened on my part to help me to finish some incomplete grades, set up a series of deadlines within which to get my thesis project completed and helped to me to select my defense committee. He then set a strict date for my defense.

In other words, Dennis walked me through the final stage of my master's degree. I honestly don't know if I would have or could have completed it without him.

As you can imagine, I have felt very beholden to him over the years. When I turned my thesis project into a book and got it published (The View from Here: Conversations with Gay and Lesbian Filmmakers), I thanked Dennis in the introduction. And of course, he was there for the launch. He hugged me, and said, "You did it. You did an amazing job."

I'll never forget such kindness and staunch support. And without the MA, I wouldn't have been able to teach — a huge part of my current vocation.

I hadn't seen Dennis in a few years, thus I was greatly saddened to know I'd never see him again, and we'd never have another Dennis Murphy Moment. I was damn lucky to have him as a professor, and Concordia was equally lucky to have him. He was one of those people I will never forget.

Dennis Murphy taught in Concordia’s Department of Communication Studies for decades until his retirement in 2010. He is credited with helping to shape the department into what it is today.

Matthew Hays graduated with an MA in communication studies in 1999. His book, The View from Here: Conversations with Gay and Lesbian Filmmakers, was cited by Quill & Quire as one of the best books of 2007 and won a 2008 Lambda Literary Award. He has taught at Concordia since 2000, winning both the Concordia Alumni Award for Innovative Teaching (2007) and Concordia President's Award for Teaching Excellence (2013).