Beyond a typical class project

Their van drove down a fog-laden, snaking road in Northern Quebec. The passengers included seven Concordia Department of Journalism students, who knocked into one another’s knees and elbows, crammed in the back seat of a black Kia Sedona on the seven-hour ride.

At the wheel — literally and figuratively — was a New York Times managing editor, Patti Sonntag, BA 00.

As the university’s first journalist-in-residence, Sonntag led her third- and fourth-year students on the 670-kilometre trip from Montreal to Baie-Comeau, Que. The purpose of their trek to the arboreal region was to conduct face-to-face interviews for an investigative report on budworms. 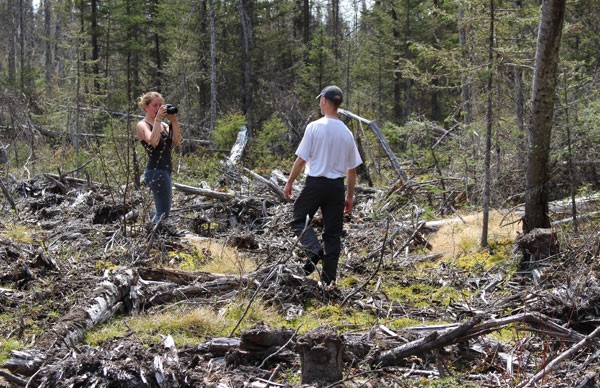 Michelle Pucci takes a photo of an interviewee while on assignment. | Photo credit: Michael Wrobel

The brown insect — which resembles a caterpillar and turns into a moth — destroys trees and is seeing increased numbers.

“I knew I wanted to do something with climate change and the forestry industry,” says Sonntag. She had the idea in tow when her residency at Concordia’s Department of Journalism commenced in January 2016.

Her group’s project involved compiling scores of numbers — a process known as “data journalism” — to guide the piece.

“Data doesn’t mean there aren’t people. In fact it’s the opposite,” she explains. “You’re delving into the data to find out what’s really going on — not just people’s opinions.”

Quebec’s coureur des bois history points to the forestry industry as being an economic mainstay. The consequences of a flagging lumber yield were meticulously explored by Sonntag and her seven students — five of whom travelled with her to Baie-Comeau.

Their 7,000-plus-word article — Attack of the Budworms — was 10 months in the making and was published by The Walrus magazine on November 15.

Once per week during the 2016 winter semester, students met with Sonntag, earning credit toward their journalism degrees in the process. By the time their two trips north took place — one in March, the other in May — the students had sifted through countless tranches of data and compiled a multitude of interviews.

“It came down to looking at numbers and finding the story within that,” says Casandra De Masi, BA 16, one of the students in Sonntag’s cohort. De Masi went on both trips up north, which were voluntary and did not count toward course credit. 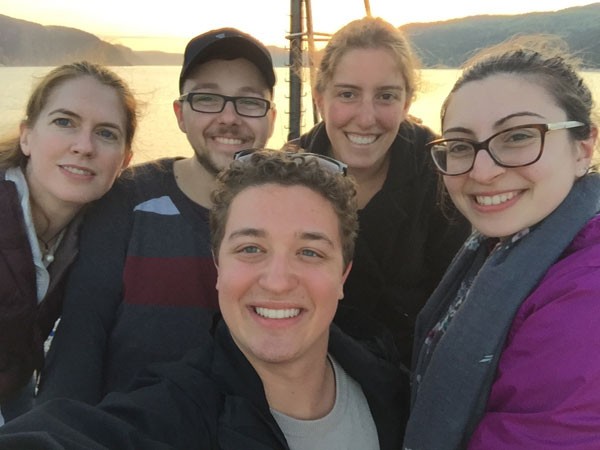 Sonntag assigned each student their own “beat” related to the project. Areas of concentration included the science of the budworm spread and its environmental and economic consequences. Sonntag sutured together the students’ reporting while writing the article for The Walrus.

“I covered everything related to labour,” says Michael Wrobel, a fourth-year double major in journalism and political affairs. “I reached out to unions, specifically Unifor, which has a big presence in the forestry industry, and the Fédération de l'industrie manufacturière.”

Michelle Pucci, BA 16, handled the economic aspect of the project. “I spoke to different companies as we focused on one region [Baie-Comeau] and the three companies that operate there,” says Pucci.

“That was my beat — trying to get their perspective. It was more a financial-based one.”

“I had the science beat. I had to try to become somewhat of an expert on budworms in the context of the project,” says De Masi.

“I’d call scientists and say, ‘I read this paper of yours,’ and we’d have great conversations. When they saw you took the time to read their work they were much more willing to help.”

Sonntag pitched her story to The Walrus magazine during her residency at Concordia, before it was ever written. “It seemed a very Canadian story to me. We needed flexibility in length and creative approach,” says Sonntag on why she chose that outlet.

One of the story’s editors at The Walrus was Carmine Starnino, BA 94, MA 01.

“I think Concordia’s journalism program is amazing at teaching people general assignment work,” says Wrobel. “For those, you have an idea where your story is going already. In this case we had no idea what it was going to be.” 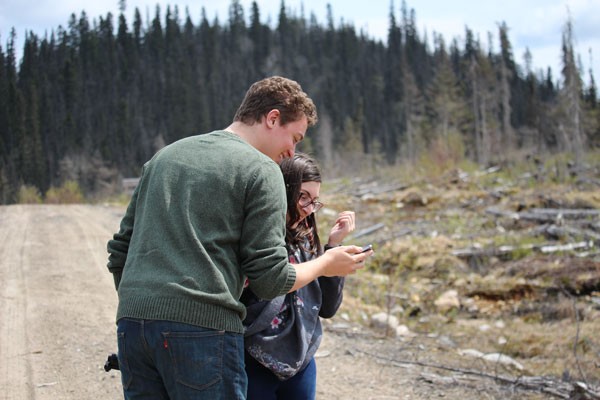 De Masi confirms that point. “In classes I’ve taken, I didn’t get the chance to do that before. The classes are structured around fast-news journalism,” she says.

“The way Patti teaches it is to actually make contacts. Talk to people and actually go into the community. I think that approach gets you a more honest story.”

Wrobel agrees. “I think we ended up building a lot of trust with the people in Baie-Comeau. It was really amazing how open they were to speaking to us,” he says.

He describes leaving one interview with a forestry equipment supplier by taxi. “I told the driver what I was doing and she said she knew a recently retired logger. She drove Michelle and me to his door right then. We knocked and set up an interview for that same day,” he recalls.

“The project involved long-term planning you don’t do in any other capacity in a newsroom,” says Pucci, who interned at the Montreal Gazette during the summer of 2016.

“There was a lot of teamwork,” she says. “We weren’t trying to outdo each other — we were sending each other tips and ideas. Helping out.”

Sonntag forecast that team kinship when she first sat down with her students in January. “I told everyone at the beginning of the class that the people there were going to be your best friends,” she says.

It’s clear to Sonntag that the experience helped her students. “They lacked confidence at the beginning, they were scared of me and the work,” she says.

“Since then they’ve become much more confident. They’ll call someone up without fear of what they’re doing. I’m proud of them.”

The icing on the cake for Sonntag is the Michener-Deacon Fellowship for Journalism Education she received in June 2016. The prestigious award will enable Sonntag to lead a group of journalism professors and their students — from universities across Canada — on an investigative project related to the fossil fuel industry beginning in January 2017.