The alumna will collaborate with students on a large-scale data project
|
By J. Latimer 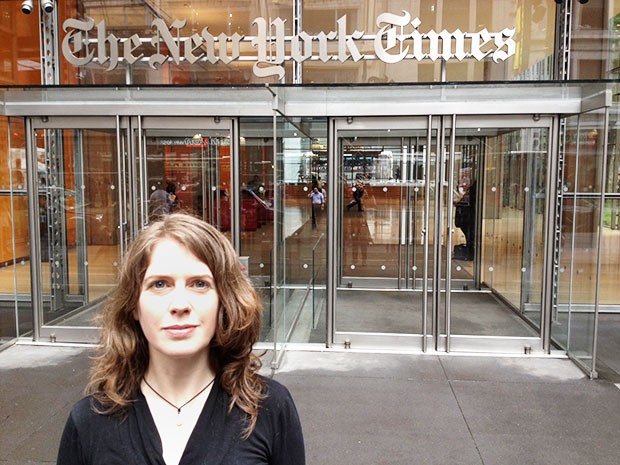 She will be leading an independent study this winter term designed to build students' investigative and data journalism skills.

“We always wanted a position like this, for someone of distinction to come and share their experience in a concrete way,” says Brian Gabrial, chair of the Department of Journalism.

'The story springs from an examination of the data'

Sonntag, who served as an intern at The New Yorker before joining The New York Times staff, will lead a small cohort of third and fourth-year students in “JOUR 451 -  Independent Study” with Gabrial acting as the host instructor.

It’s an investigative project looking at the use of natural resources in Canada. That’s all we can say, for now. (A certain amount of secrecy is part of the process.)

“It’s a data-journalism project, so the story springs from an examination of the data,” says Sonntag, BA 00, who completed a double-honours degree in English and writing at Concordia, with a minor in Film Production.

Citing the Data Journalism Handbook, Sonntag defines data journalism as the new possibilities that open up when you combine the traditional “nose for news” and ability to tell a compelling story with the sheer scale and range of digital information now available.

Those possibilities can come at any stage of the journalist’s process: using programming to automate the process of gathering and combining information from local government, police and other civic sources.

“I want the students to get a better understanding of investigative and data journalism and a practical understanding,” says Sonntag.

“They’re going to act as one reporter. They have readings already, and I’ll assign beats within the story so they can start the exploratory reporting. We’ll have our first meeting to discuss our reporting early on.” As part of the residency, Sonntag will be on campus every Friday.

The end goal is to start work on a finished article with a multiple byline, but Sonntag is quick to manage expectations.

“This kind of in-depth story can take time,” she says. “Everything’s an experiment. You never know what’s going to happen with investigative journalism and Concordia is such a flexible place.”

Making room for the journalist-in-residence

While visiting alumni in New York last fall, Alan Shepard, Concordia’s president, took a tour of The New York Times with Sonntag. He introduced her to Gabrial.

“The creation of the journalist-in-residence was possible with the support of the dean, André Roy, who then took the idea to the provost and vice-president, Academic Affairs, Benoit-Antoine Bacon, who provided us with one semester of funding,” says Gabrial.

“Maybe this will become our department’s niche — the thing we’re widely known for.”

Find out about Concordia’s new major in Journalism.