The ideas and worldviews that children can come up with are limitless. Yet Concordia PhD candidate Natalie Fletcher says that unfortunately the same cannot be said for kids’ opportunities to express them. 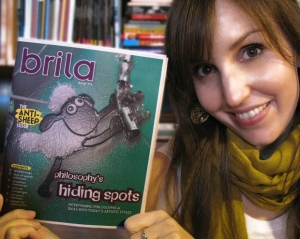 Natalie Fletcher, a doctoral student in Concordia’s PhD in Humanities program and founding director of Brila Youth Projects, shows off one of the youth charity’s zines based on participants’ creative works.

Currently studying in Concordia’s Centre for Interdisciplinary Studies in Society and Culture, Fletcher has been working diligently over the last eight years to change that. She is the director of Brila, a youth charity that runs creativity camps and workshops that encourage curious children aged six and up to think critically and be philosophical.

Brila’s Creativity Camps provide children with a platform to express and develop those ideas with the help of their peers. A separate leadership workshop is also held for teens aged between 13 and 18, with many participants staying as junior facilitators for the younger groups.

The bilingual camps feature a series of creative exercises that allow the kids to see how their different views are represented as they engage in a continuous, playful and open-minded dialogue. Those exercises include philosophical versions of classic board games such as Clue and Guess Who.

“It’s created so that inevitably there will be unfairness in how you play it,” Fletcher says. “It gets them asking questions about what would be fair, and naturally they’re having this discussion about the issue of fairness.”

Fletcher explains that the lively discussions are a growing experience for everyone — including herself. As a facilitator during the activities, she is more than happy to stay out of the kids’ way once they’re engaged and brimming with ideas.

“It’s completely children-driven, so you don’t know where they’re going to go with the discussion and you don’t know what their final perspectives are going to be,” Fletcher says. “In that sense the content is always really exciting because it’s unexpected and they come up with these amazing worldviews that definitely impact my own.”

In providing the campers with a platform to comfortably express their views, part of Brila’s initiative is to ensure that the children’s ideas are not just fleeting. After every camp, Brila publishes a digital magazine, or zine, that features the participants’ philosophical ideas through their creative projects, whether words, pictures, videos or designs.

Patrick Leroux, an associate professor in Concordia’s Department of English, enrolled his daughter in Brila’s Winter Creativity Camp last year. “She was very proud to show this archive to her friends and family,” he says. “They clearly weren’t being sent for babysitting. This was a valid, rich experience allowing the children to grow.”

Since Fletcher’s PhD work focuses on developing a framework to engage children’s imagination and intellect, she is not the least bit surprised by their creative outputs. Yet she reports that some of the special guests have been left speechless.

“They’re just flabbergasted to see that kids have very developed and strong positions on issues they hadn’t even considered before,” she says. 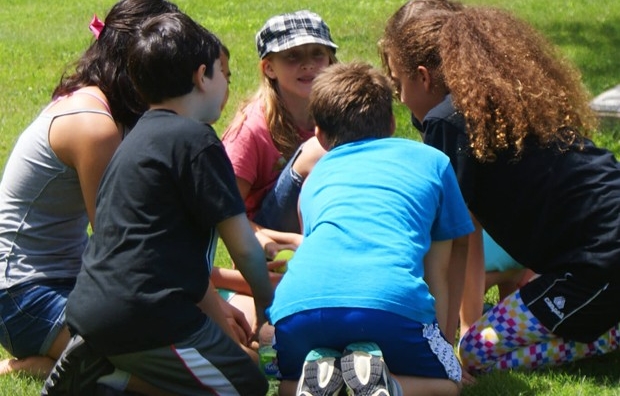 Campers during one of Brila’s collaborative thinking challenges involving the creation of an ideal community.