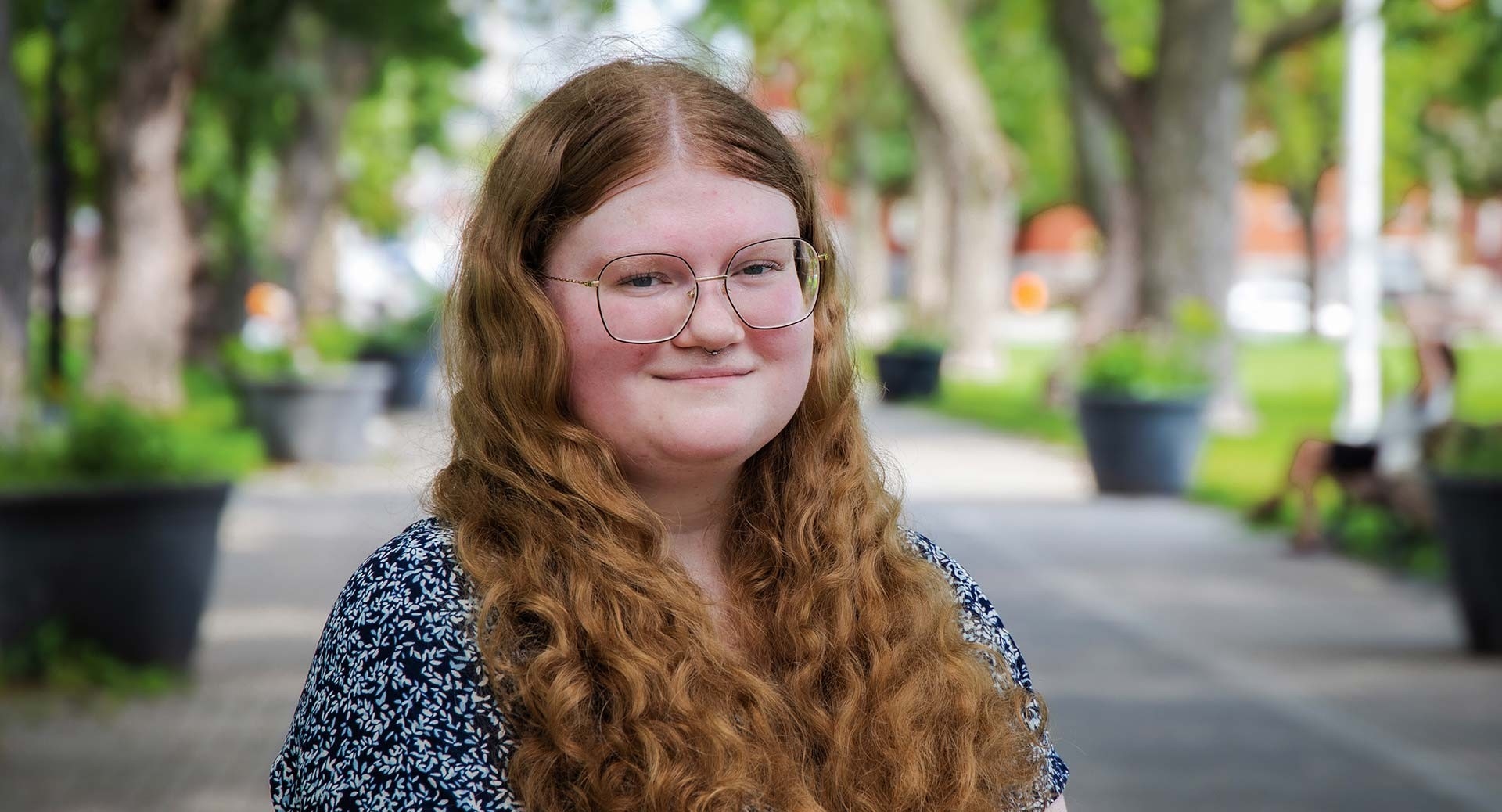 Bridget Griffith is the 2021-22 winner of the Gabriel Safdie Award in Creative Writing for Fiction.

The following is excerpted from a longer work.

The lion’s eyes had begun to fade from gold into violet, lightly shaded and dancing with spots of sky blue. Lucy sat back against the headrest, adjusting her seatbelt and colouring lightly as the road dipped and lifted. She drowned out her mother’s occasional sniffles with bulky headphones, music blasting through so Vanessa could just barely hear the irate tune. Glowering, Lucy raised the volume on her phone as the sound of the radio began to filter into her ears.The tight feeling in her chest hadn’t gone since leaving the house, joined now by a faint sense of nausea. Lucy looked up at the highway snaking into the distance ahead of them. She let the pencil slide into her book’s spine and lifted her hand to her mouth, clamping teeth around nails. The road grew bumpier as they travelled through a construction zone. She turned her music up higher.

When she felt a hand wrapping around hers, Lucy tried to pull away with a groan. Her mother nudged her thigh, so she removed her headphones and turned.

“No I’m not!” Lucy ripped her hand away from her mother, kicking the dashboard with her left leg. “You’re the one who made me get all dressed up for no damn reason, and you’re the one who keeps on nagging me about if I’m okay or not! Maybe you’re the one who doesn’t want to do this because you know it isn’t going to go how you want!”

For a moment, the car got quieter, only disturbed by the voice on the radio moving rapidly against an electric rhythm, yelling about things that Lucy hated. She leaned forward and slammed her hand against the power button. Silence.

Slowly, Vanessa spoke again, “Hon, the last time your dad saw you, you were a wreck. He needs to see that you’re strong now, that you’re doing better! He thought that your life was ruined forever and he blames himself every single day for it. You need to show him he’s wrong.”

Lucy could feel her face growing hot and the tightness in her chest travelling up the sides of her head, the anger all-consuming.

“Lucy! Don’t you dare say that to him. That is not true.”

“Are you kidding me? You are so disrespectful, I’m doing this for you!”

Vanessa’s voice, like a fly on Lucy’s shoulder, was drowned out by the heavy bass of music as she slapped her headphones back on.

The air inside the facility was stale, so much so that Lucy could taste the bitterness.

The lights were artificial and dim, burning her eyes and causing her head to throb despite their mute effect. With a deep sigh, Lucy slid the crutch out from beneath her right armpit and leaned it against the table, taking a seat on cold metal. She chanced a look at her mother, who sat beside her with colouring book and pencil case in hand. Her lips were a sloppy mauve and her reddened skin was smeared with fresh concealer and foundation, hastily applied in the parking lot. It made Lucy roll her eyes. She reached for her book. The silence between them remained rigid, neither mother nor daughter willing to be the first to break the ice.

Lucy didn’t look up from her book at first when another body slid into the bench across from her and her mother. She focused instead on the melting of silver into red, making perked ears appear deeper, dimensional.

“Hi, Kevin,” Vanessa’s voice was low, barely above a whisper. Her silver bracelets grazed the metal of the tabletop, clinking when she reached across to wrap her hands around her husband’s wrist.

Momentarily, no words were spoken. A hand came into Lucy’s view, large and square, brittle hair growing past the ink of a tattoo. He was asking, or maybe begging her to look at him. She glanced at his hand, then reached for the navy blue beside her.

“Hey, Lu.” Kevin’s voice grew quieter, as if he was speaking to a feral animal on the hunt for an escape.

Lucy finally looked up, surprised to hear her father speak directly to her.

His clothes were a sickening beige from head to toe, thick and low collared. His hair was tangled and messy in spite of a clear effort to tame it. His once clean-shaven face was scruffy, beard growing and covering up the sharp jaw Lucy had always been able to identify him by when he picked her up from school and the crowd made her feel lost. A year in prison changed him from Lucy’s father to a man who was just getting by.

Kevin’s eyes, which were a soft shade of brown — amber, Lucy called them — were bloodshot and decorated by the exhaustion of sleepless nights and emotional fatigue. In other ways, he seemed the same. Same broad shoulders, same tattoos, patterns in blue and red and orange. Lucy’s initials and birthday were still inked into his right wrist, fading from black into grey. He was the same man he’d been more than a year ago. But now, Lucy knew better.

She felt determined, after everything, not to give him the reunion he desired. “How, uh… how have you been doing?” he asked.

For a moment, Lucy felt Vanessa’s eyes boring into her, and her father swallowed.

He shifted in his seat uncomfortably and scratched behind his ear; what he did when he was nervous. Lucy scoffed under her breath, returning to her lion.

“Lucy,” Vanessa’s voice was careful, but threatening, “maybe we should talk about last year? The accident?”

“Oh no, I think we need to. Lucy? Is there anything you want to say about it?”

Peering up at her parents, Lucy set her pencil down and scratched her chin ever so curiously. “Sorry, what accident? I don’t remember any accidents.”

Vanessa opened her mouth, the lines on her face deepening with impatience. Before she could speak, Kevin interrupted.

“The car wreck, Lu. You know what we’re talking about.”

“Oh,” she perked up as if in recollection, staring her father down, “you mean when you picked me up while blackout drunk, killed two people and permanently disabled me? Yeah, that wasn’t an accident. You could have avoided that.”

Her mother gaped and her father’s mouth spread into a tight line. Almost trembling. Neither knew what to say.

Vanessa was first to speak, as unimpressed as Lucy anticipated, “Lucy. That is no way to speak to your father! Of course it was an accident, he didn’t mean to do it, and how dare you accuse him of anything otherwise!”

Voices overlapped in accusatory and furious tones, rising in volume, until Vanessa and Kevin were arguing and Lucy once again stared solely at her colouring book. She scratched at the lion’s chin in vigorous strokes, cherry red, lemon yellow and gold. After a few long moments passed, silence fell. Lucy looked up to see other visitors staring at them, and a correctional officer inviting them to leave.