Return to in-person edition brings in more than $220,000 in support for Concordia students
|
By Daniel Bartlett, BA 08
Source: University Advancement 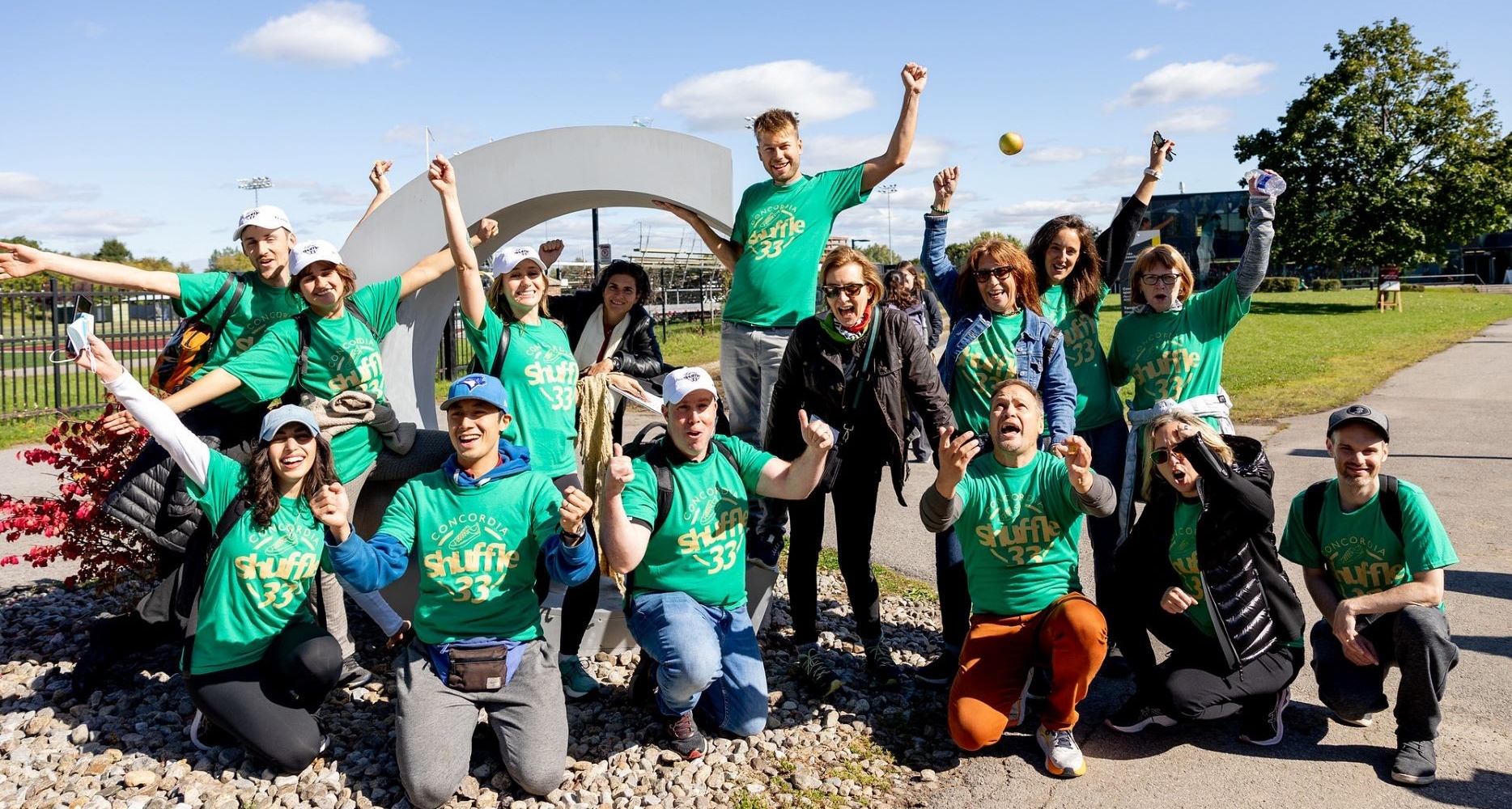 Congratulations to all shufflers and sponsors for helping to beat our fundraising record!

For the first time since 2019, faculty, staff, students and alumni took to Montreal streets to participate in the return of the in-person Concordia Shuffle on September 23.

Close to 900 shufflers trekked 6.5-kilometre between the Sir George Williams and Loyola campuses to raise funds for scholarships, bursaries and student support services and resources.

The result? A new record for the in-person edition of the annual walkathon.

“Our previous record for total funds raised was more than $142,000 in 2019,” Concordia President and Vice-Chancellor Graham Carr told shufflers at the President’s Picnic at the Loyola athletic field. “Our goal for this year was $150,000 and we beat it! We raised a total of $220,000 — and counting!”

The Shuffle has now raised more than $2.7 million for students since 1990.

While temperatures hovered around 12 degrees Celsius, the sun shone bright throughout the day.

The walkathon got started with a lively kick-off in the Engineering, Computer Science and Visual Arts Integrated Complex atrium, where Paul Chesser, BA 94, GrDip 97, vice-president of Advancement, warmed up the crowd.

“For 33 years, shufflers have walked more than 205 kilometres to raise funds for students,” he said. “That comes out to about $12,000 per kilometre!” 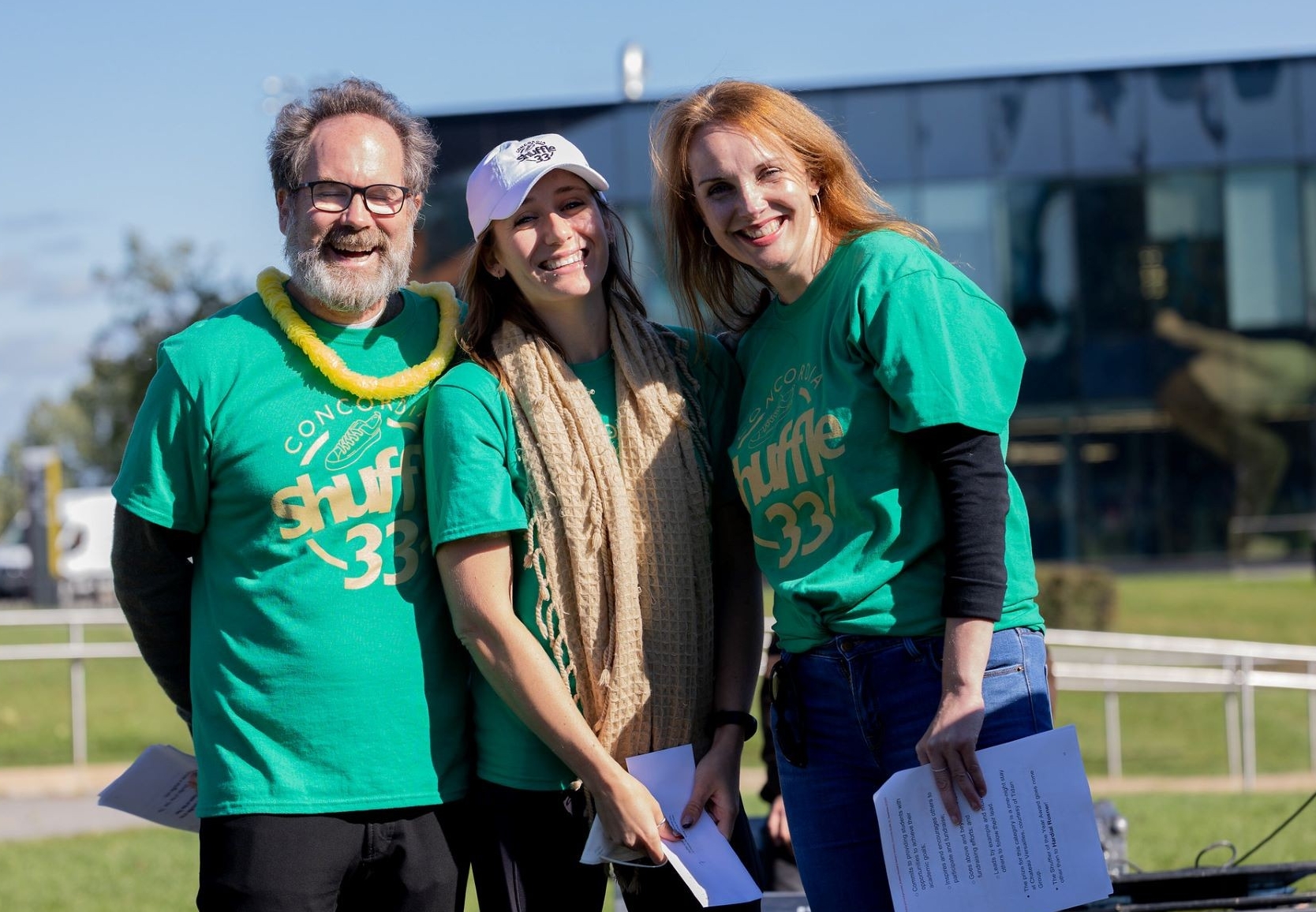 Hardial Rosner (centre) receives her Shuffler of the Year prize from Shuffle 33 co-chairs Andrew Woodall, dean of Students, and Barbara Henchey, director of the Office of the Dean for the John Molson School of Business.

Following the walk, Shuffle 33 co-chairs Andrew Woodall, dean of Students, and Barbara Henchey, director of the Office of the Dean for the John Molson School of Business, emceed the picnic and handed out prizes.

For her efforts on the Facilities Footsteps team, Hardial Rosner, property administrative coordinator in Facilities Management, earned the Shuffler of the Year award.

“In all, Hardial raised more than $5,600 for students through the Shuffle,” Woodall said, noting this was her first Shuffle.

Shuffle Team of the Year went to team Justin Time. The 11-member team shuffled in memory of Justin Powlowski, who notably served as Concordia’s associate vice-president of Research, Strategic Initiatives and Partnerships. Powlowski passed away on December 19, 2021.

“The team in his honour raised more than $33,000 for students!” Henchey announced. “That includes Adrian Tsang, director of the Centre for Structural and Functional Genomics. Adrian raised more than $10,000. That is remarkable!”

Shufflers harnessed the power of walking as groups for specific causes. More than 60 teams registered for the walkathon.

While teams like CU at the Top, the Nadia Chaudhri Wingspan Walkers and the Gina Cody School EDI Trekkers raised funds for causes that are meaningful to them, others such as the BANGS OF GLORY! took a lighter approach.

All gifts to the Shuffle count towards the Campaign for Concordia — a landmark effort to support the next generation.