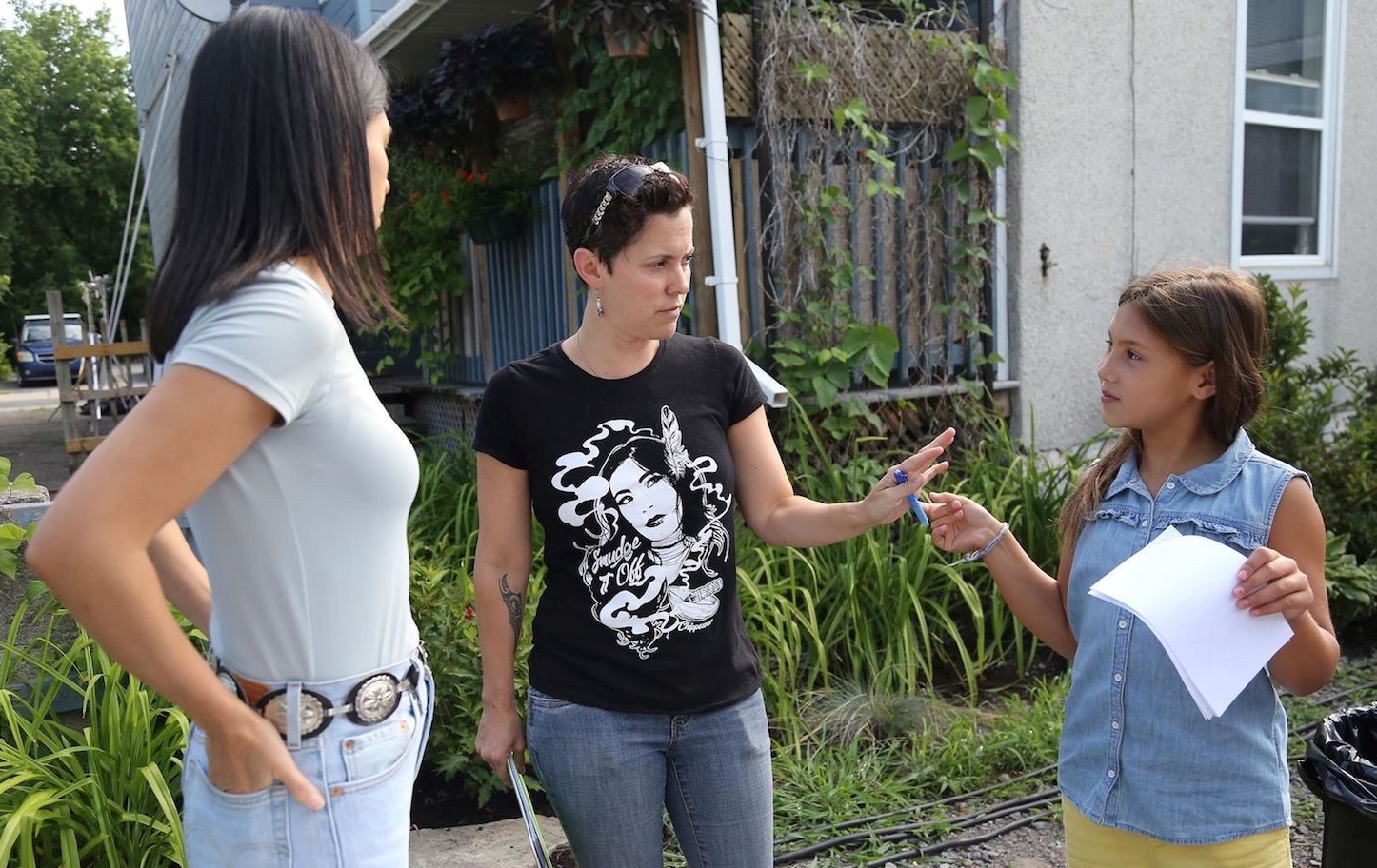 Sonia Bonspille Boileau (centre) on the set of Rustic Oracle with Carmen Moore and Lake Delisle.

When she was little, Sonia Bonspille Boileau, BFA 06, dreamed of becoming a filmmaker. “I would spend an hour and a half at the video store trying to decide what to watch that night, then sit at home with my family or friends and watch the movie,” the Indigenous filmmaker recalls.

When she saw the 1993 National Film Board documentary Kanehsatake: 270 Years of Resistance by internationally-renowned Indigenous filmmaker Alanis Obomsawin, LLD 93, Bonspille Boileau says the doc showed her that “it was possible to tell a story from our perspective.”

After graduating from Concordia’s Mel Hoppenheim School of Cinema, Bonspille Boileau would go on not only to tell those stories, but to blaze a trail for other Indigenous filmmakers.

“I loved Concordia,” she says. “I still hear the voices of some of my teachers in my head when I’m working today. My writing classes definitely helped me the most since, honestly, I consider myself more of a writer than a director.”

The bilingual Kanien’kehá:ka (Mohawk) filmmaker has been a content creator at the prize-winning, Indigenous-owned production house Nish Media, based in Gatineau, Que., since 2007. She directed her first feature, Le Dep, in 2015. And this spring, her new six-part television series Pour toi Flora will premiere on Radio-Canada — the first Indigenous-written, directed and produced drama series in the network’s history.

“I wanted to do a series on residential schools and residential school survivors, specifically in Quebec, where some people think residential schools didn’t exist,” Bonspille Boileau says. “This is not part of our collective history, so I needed to change that. Radio-Canada was receptive from day one and have helped us through the entire development process. There are a lot of Indigenous actors in the cast, as well as many famous Quebec actors.”

‘We have come a long way’

“Not only was it incredibly hard to get funding, but it was also incredibly hard to get interest from any broadcaster other than APTN,” Bonspille Boileau recalls. “Broadcasters and funders couldn’t see the value of Indigenous content on mainstream television. They thought that there was no way people would be interested. There is still a ways to go, but we have come a long way in the last few years.”

Indigenous storytellers — including in the film industry — are underrepresented, especially in Quebec, she observes. “But it isn’t just as directors or producers. I’m talking about camera people, editors, sound designers. There is definitely a lack of diversity in general in those positions. There are hardly any Indigenous people in that side of filmmaking, media and television.”

‘I learned so much about film in my formative years’

Among her proudest moments, Bonspille Boileau was thrilled to win a Prix Gémeaux in 2011 for her acclaimed documentary Last Call Indian, about holding onto her culture after the recent passing of her grandfather.

Then in 2017, Bonspille Boileau won the prestigious Women in the Director’s Chair Feature Film Award. “That was an amazing experience because the cash prize helped fund my feature film Rustic Oracle,” she says. “The way that prize is designed, you also get to access workshops and work with other women in the industry. I spent two weeks with this wonderful group of women mentors helping one another push our projects forward. That, to me, was even more valuable than the cash prize that helped fund my film.”

Bonspille Boileau went on to use Rustic Oracle — an exploration of the complex crisis of missing and murdered Indigenous women — as a point of discussion for the use of fiction in both representing truth and reclaiming Indigenous narratives to help clarify our collective memory in her Decolonizing the Screen Through Indigenous Cinema lecture at Concordia in October 2020.

“It was great to able to return to Concordia, where I learned so much about film in my formative years,” Bonspille Boileau says, recalling how she loved the creative freedom of the university’s film production classes. “To this day, I’m still in touch with a lot of people from my group. Those contacts, you hang on to them. It was a wonderful time.”