‘Our mandate is to serve Indigenous people’ 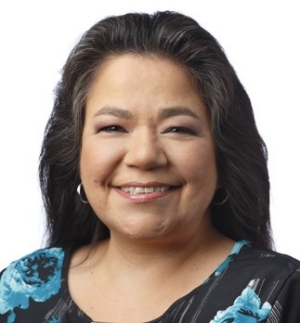 Cheryl McKenzie is the executive director of news and current affairs at the Aboriginal People's Television Network (APTN).

Cheryl McKenzie never dreamed of becoming a journalist nor anchoring a newscast. As a young, single mother, she just wanted to find a stable job to support herself and her child.

Yet after being urged by a family friend to pursue higher education, McKenzie graduated and went on to work as an employment counsellor at an Indigenous resource centre in Winnipeg, Manitoba. It was there — where she’d often see ads for jobs with the Aboriginal Public Television Network (APTN) — that her interest for a career in journalism was piqued.

McKenzie's curiosity led to an internship with the CBC, followed by a two-decade career with APTN, where she now serves as executive director of News and Current Affairs.

The Gemini- and Canadian Association of Broadcasters-award nominee was the featured speaker at Concordia’s 2022 Reader’s Digest Annual Lecture Series in Journalism on February 24. We spoke to McKenzie about her professional journey and the role of Indigenous voices in Canada’s media landscape.

How did you break into journalism?

Cheryl McKenzie: When I was working as a counsellor in Winnipeg, CBC created a new internship for Indigenous reporters. I like to do my due diligence so I got a tour of the CBC newsroom and asked a bunch of questions. I thought ‘Oh wow, this is really interesting,’ but I never thought I would work in this field.

We submitted some promising candidates from our pool of applicants, but when I sent in the applications to the CBC, I slipped in my own resume and cover letter. In the end, I got the position.

It was a three-month internship that they extended twice, so it ended up being nine months.

After it was over, I decided to walk down the street to the APTN offices and asked to speak to whoever was in charge of news. I was only unemployed for a week because APTN just happened to have a job opening.

You’ve spent the bulk of your 20-year career at APTN. What role does APTN play in the Canadian media landscape and how does it differentiate from other national media organizations?

CM: I think first and foremost is that APTN had to fight to exist. Even the other national broadcasters didn’t really believe in APTN. If we look back at the CRTC [The Canadian Radio-television and Telecommunications Commission] transcripts, we can even see some broadcasters arguing against our existence. So Indigenous peoples have had to fight for our right to be in the national media and occupy space there because our voices weren’t being heard.

At APTN, we’re a national broadcaster with a huge digital presence and we have daily broadcasts that are entirely about Indigenous communities and stories. We’re part of the World Indigenous Television Broadcasters Network and only we and Māori Television have our own stations — everyone else just gets 10 minutes in their national news.

Why is it so important for Indigenous peoples to have their own national news broadcaster?

CM: Canada is a colonized country, and we know of the massive dispossession of Indigenous people across the nation. Last year, when the unmarked graves of Indigenous children were discovered, it got people asking ‘Where was the media when all this was happening?’ There were a few small stories here and there about some of the bad things happening [in residential schools], but they didn’t get much traction.

The United Nations Declaration on the Rights of Indigenous Peoples also upholds the principle that Indigenous people have to own and control their own media because we’ve been owned and controlled for so long — there’s no going back to that.

That’s why there absolutely has to be an Indigenous media broadcaster in Canada that is by, for and about Indigenous peoples.

Journalism in Canada, the United States and around the world is under attack. Why do you think that is and what does it mean for the future of journalism?

CM: I think we’re all struggling with shrinking revenues and that is definitely impacting our ability to keep doing quality journalism, to go in-depth and give people the bigger picture and different perspectives. This is especially true for news broadcasters that are connected to a television station, like APTN. We get most of our revenue from cable subscriptions and those are going away as people get their media from so many other sources.

Do we go more mainstream to attract a larger audience? No, our mandate is to serve Indigenous people. We need to go with our strengths of bringing more context to Indigenous stories. We’re never going to beat the CBC, CTV and Global for speed, but what we can do is add a lot more context to those stories.

Cheryl McKenzie was the featured speaker for our virtual 2022 Reader’s Digest Annual Lecture Series in Journalism on February 24 . The conversation was moderated by Aphrodite Salas, MA 99, assistant professor and director of Concordia's Journalism Graduate Diploma program.