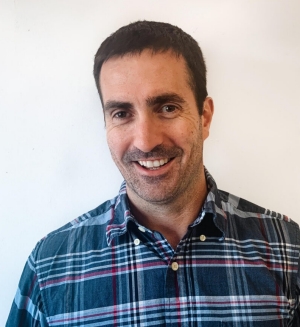 Shawn Maloney, GrCert 10, is what some might call a go-getter. The father of three originally from Cornwall, Ont., holds a PhD in pathology and a graduate certificate in business administration. He worked as a grad student at Harvard and completed a postdoc in ophthalmology.

Along the way, Maloney, who has been legally blind since 2007, also launched a top-ranking ophthalmology podcast and began an academic publication-services venture on the side.

“I have always believed that life is more fun at the edge of your comfort zone,” he says. “I’ve lived my life consistently pushing that boundary.”

Drawn to entrepreneurship, Maloney enrolled in Concordia’s Graduate Certificate in Business Administration program in 2009 to “gain basic insights into various aspects of business,” he says. “Before the program, I dreamed of business ideas. During and after the program, I realized they were within reach. Breaking down this mental barrier was most impactful for me.”

So impactful that Maloney decided to leave academia altogether in 2014 to focus exclusively on his business dreams and enjoy a better work-life balance.

“While I have always loved science, the idea of betting on myself and my venture was very attractive at the time,” he recalls. “I had three young children and a wife on maternity leave, so it wasn’t an easy decision. I was fortunate that my wife believed in me — and still does.”

Today Maloney is revolutionizing traditional learning speeds as co-founder, with Neha Bhutani, of REVAI, a company that leverages cutting-edge technology in neuroscience to enhance human cognition. REVAI is the creator of smart earbuds that use vagus nerve stimulation (VNS), to accelerate learning, particularly in language acquisition.

‘Tapping into a natural process and amplifying it’

The longest nerve in the human body, the vagus nerve communicates messages between the brain and several major organs. As Maloney explains, “VNS is an area of research that has exploded in recent years. There are approved medical applications for treating epilepsy, depression, chronic pain and stroke.

“Our technology accesses a branch of this nerve located in the outer ear, allowing for non-invasive stimulation in a way that has been shown to influence activity in the brain’s learning centres. Essentially we are pairing the stimulation with audio-based learning to improve memory. We are tapping into a natural process and amplifying it to improve learning and memory.”

The earbuds might be a big draw for anyone wishing to quickly master a new language. REVAI cites pilot studies which have shown that 80 per cent of participants improved their speed of learning new vocabulary in a second language up to 25 per cent faster using its technology.

“We have data with some participants showing increases in word recall accuracy well over 200 per cent when compared with controls. That being said, these are early days for our venture and a lot of work needs to be done to better understand both the potential and limitations of this technology.”

REVAI is working to ensure the earbuds will be compatible with Apple and Android products via Bluetooth. Discussions are also ongoing with hardware companies to ascertain whether the new technology can be integrated into standard earbuds so that users may benefit from its myriad other uses.

“Language learning is just the beginning,” predicts Maloney. “Some of the processes that underlie language learning also influence other types of learning. So we think there’s potential for mathematics, music education, language recovery after stroke and many other applications.”

As for when the earbuds will be on the market and at what price point, Maloney hesitates to comment as more work needs to be done.

“While we have received significant funding thus far from TandemLaunch, a Montreal-based deep-tech startup foundry and venture capital fund, mass producing the earbuds will require an additional fundraising round which we expect to take place in the second quarter of 2022.”