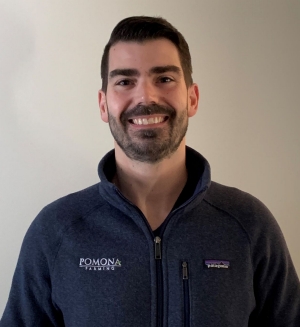 “I'm a big believer that you have to lose money to learn how to make money in the stock market,” says Christian Bonneau.

Christian Bonneau, BComm 06, thrives at the intersection of agriculture and global investing.

As managing director, head of North America and Timber for the Natural Resources Group at PSP Investments, Bonneau travels everywhere from the forests of New Zealand and British Columbia to farms in California and Maui. There, he looks for opportunities to invest in the future of agriculture and timber on behalf of one of Canada's largest pension funds.

“The agriculture sector is at a bit of a crossroads as there are many farmers who have built up substantial land bases and quite a bit of wealth over time but are now nearing retirement age, and we hope to act as a succession plan for that older generation,” he says.

“We'll come in and make a significant investment in their business, which involves not just the initial investment but also committing capital for future growth alongside the next generation who can continue to operate and grow the business.”

Being curious, hard-working and adept at math, Bonneau said he was initially torn between studying finance and medicine when it came to choosing his career path.

“I have a low tolerance for seeing blood and medical things so I’m happy with my decision,” he jokes.

“I took a natural interest in commerce because it involves understanding numbers, mixed with psychology and using logic to think-out complex scenarios.”

There is a lot at stake in Bonneau’s work for PSP Investments, where he’s responsible for a multibillion-dollar timber and agriculture investment portfolio using the pension plans funds of Canada’s Public Service, Armed Forces, RCMP and the Reserve Force.

During the Kenneth Woods program, Bonneau says analyzing and managing the program’s own portfolio — currently at more than $3.4 million — helped teach him how to take calculated risks early on, through mentorship from staff, industry professionals, and his fellow students.

“I'm a big believer that you have to lose money to learn how to make money in the stock market. I came into the Kenneth Woods program without much of a commerce background but tried my best to do as much research and pitch as many stocks as possible.”

Bonneau says learning to do thorough research has helped him at PSP Investments when finding new partnerships with experienced, local operators in investment-friendly jurisdictions around the world.

But making the initial investment is only the beginning of the journey. He and his team cultivate long-term partnerships with landowners, working together on asset committees and boards of directors towards a shared vision. Before the pandemic, Bonneau says some months he would spend more time abroad visiting local partners than he would at his desk at home in Montreal.

“I like the interactions with our partners, being on the ground and working with them to develop strategies. It's intellectually stimulating to learn from so many different perspectives across our different businesses,” he says.

Bonneau says the Kenneth Woods Portfolio Management Program also helped him develop the leadership and interpersonal skills that contribute to the ongoing success of these investments.

“I was a pretty shy individual and I got a lot of confidence from the program, particularly because I was encouraged to step up and be more of a leader.”

Beyond the classroom at Concordia, Bonneau was also active in case competitions, where teams are given a tight deadline to solve a business problem — analyzing the situation and presenting a solution to a panel of judges, including high-level industry professionals.

“You take what’s in a textbook and apply it to real life, which helps you to think about it on a global scale in a business like this,” he says.

He enjoyed this activity so much that several years after graduating he returned as a strategy coach, training inexperienced teams to become formidable competitors over the course of five months.

“It's really impressive how much growth you see and what they can accomplish over that timeframe,” he says.

As Bonneau celebrates his 10th anniversary with the PSP natural resource group, he reflects on what he has accomplished so far, starting as part of a team of three that now has 28 members and a portfolio that has grown from $500 million to $13 billion.

“I'm excited about what we’ve built and where it's going to take us in the future. The journey is just getting started.”

A first in Quebec, the program admits a select group of students on an annual basis who, with supervision from finance professors and mentorship from industry professionals, manage an investment portfolio now worth over $3.8 million.