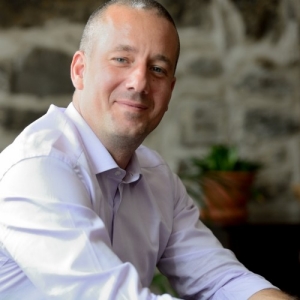 "An EMBA gets you out of your comfort zone," says Mathieu Rondeau.

Mathieu Rondeau, EMBA 09, is a visionary on a mission. But visionaries can sometimes find themselves ahead of their time, and Rondeau is no exception.

Whether trying to start a company in 2002 to provide what today would be known as internet cloud services, or promoting environmental projects based on the use and management of organic waste, Rondeau has suffered his share of ups and downs.

To be sure, he also enjoyed some satisfying success in the 1990s, but it was following setbacks in the early 2000s that he decided to go back to school. First, he attended HEC Montréal for a certificate in marketing, and then, while working for a small venture-capital firm, enrolled at Concordia’s John Molson School of Business for an Executive MBA (EMBA), during which he began working for Rio Tinto Alcan.

“I said to myself, ‘maybe my instincts are good, but I need to go back to the books and understand more,’” Rondeau says. “I felt I needed to up my game and become more business-savvy. I wanted to regain my confidence and, in a way, be more credible in boardrooms and negotiations.”

Rondeau found the EMBA experience valuable, and not just for brushing up time-management and multitasking skills. “I’ve developed very strong and long-lasting friendships with many fellow students, which, in many instances, have served as a professional support system,” he says. It’s what’s helped him develop a strong business network — essential in today’s connected world.

The way the program challenges its students is also of benefit, Rondeau observes. “An EMBA gets you out of your comfort zone and you feel this very quickly the first week, when you are asked to make presentations with little preparation. You have to put your social skills and emotional intelligence forward to develop productive relationships with your fellow students.”

Making ‘a positive impact on the world’

In 2013, after a few years at a large multinational, Rondeau co-founded Soléco Canada, a firm that began by developing projects to produce biogas from organic waste, but now turns plastic waste into low-carbon fuels and specialized oils. It also consults with clients on energy efficiency, greenhouse gas inventories and projects to help reduce carbon footprints. This was in part to rekindle a desire dating from Rondeau’s undergraduate days studying environmental geography at l’Université de Montréal: to help “change the world and have a positive impact.”

Rondeau was still ahead of his time, however.

As he was launching Soléco, the Government of Quebec was promising $35 million to help private promoters put together projects to manage organic waste in an efficient and environmental way.

“I jumped on this,” he says, “but we were unable to get a good project off the ground because the government never ended up supporting private promoters at the time." Constraints and regulations made it difficult to bring projects to fruition. “We concluded that the market wasn’t ready.”

Times change. Today, Rondeau says, the market is ready and big projects are on the horizon, including a large biogas facility planned for Montreal. In the interim, Soléco has developed projects in Guatemala and El Salvador and has found a way to turn plastic waste into profit. Its plant in Thetford Mines, Que., is ready to enter its commercialization phase this summer, with the goal of helping communities tackle growing plastic waste-management problems. A modular facility, it can be replicated and located anywhere. After all, the world’s 350 million tonnes of plastic waste aren’t all located in the same place.

Rondeau connects his current work back to the Concordia EMBA program. He says it should include a first-year class about the climate emergency confronting the planet. “It’s a must for it to be included in programs now,” he says. “There’s a big elephant in the room.”

As for advice for prospective students, “Do not hesitate to join the program,” he says. “You will make friends for life, significantly enhance your business network and become a better businessperson.”

Founded in 1985, the John Molson Executive MBA program — the first of its kind in Quebec — was created for executives, entrepreneurs and professionals with considerable business experience, to develop into leaders who flourish in times of ambiguity and fast-paced change. The program is designed to broaden individuals’ knowledge to develop a more integrated or bigger-picture perspective typically associated with senior leadership.