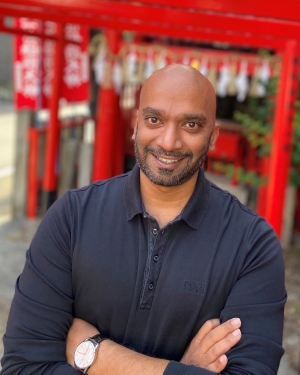 “Embrace all change as opportunities, even if they seem risky at the time,” says Udaya Silva, EMBA 11. | Photo: Nenad Nikoloski

It’s the term pilots tell one another when they begin to pull back on the yoke or stick of the aircraft they’re guiding as it hurtles down the runway, ready to soar.

You could say Udaya Silva’s, EMBA 11, career rotated in 2009, when he found himself suddenly promoted to managing director of a Canadian aerospace company following its acquisition by a larger U.S. firm. Silva realized he needed to get in front of the challenges that lay ahead, so he enrolled in the Executive MBA program at the John Molson School of Business.

And, in a career that continues to grow and evolve, he hasn’t looked back.

Born in Colombo, Sri Lanka, Silva lived and grew up in the Middle East and Southeast Asia as his diplomat father moved from post to post. Eventually, the family settled in Canada, and Silva found himself at Carleton University in Ottawa, where he graduated in aerospace engineering in 2002.

“Engineering degrees do not necessarily prepare you for leadership roles,” Silva says. “An MBA, combined with engineering experience, typically creates a good combination for future growth. I was about to take on a big role in my organization and I needed the credibility of a good program to support what I was about to do.”

But there was more to it than just the acquisition of specific skills. There was also something to prove.

“The EMBA gave me the courage and confidence to say that I was part of the business elite in Canada,” Silva says. “Coming from a South Asian background, this was important, because leaders at that time were typically white, middle-aged and mostly men. For me, it was important to prove that young, non-Caucasian members of the community could have what it takes to be leaders in important business fields.”

Like most John Molson EMBA grads, Silva found the two-day-a-week schedule of Concordia’s EMBA program (a Friday and Saturday every other week) made a lot of sense to someone who was frequently travelling for work and had multiple commitments.

“I enjoyed the flexibility of the weekend program,” he says. “While it was intense and arduous, it allowed for integration with an already busy lifestyle.”

Silva considers himself lucky to have had his career take off as smoothly as it did, considering the dramatic events that transpired during his graduation year.

“As I graduated from Carleton, I was one of the fortunate few to find employment in aerospace coming out of the recession that followed the events of September 2011,” he says. “It was a privilege to find work in aviation in such tumultuous times.”

Silva is now ending a two-year contract in Nagoya for Mitsubishi Aircraft Corporation, having led its flight control system group in aiding Japan to develop its first commercial aircraft program. The pandemic’s effect on the aviation and aerospace industry has caused Mitsubishi to put the program on hold. He is looking forward to his next move, a relocation to Germany to work for Electrolux Group, a Stockholm-based appliance manufacturer.

His experience has helped him gain a perspective he would share with potential EMBA candidates. “In our dynamic world — where you need to be constantly ready for the unexpected — embrace all change as opportunities, even if they seem risky at the time,” says Silva. “Prepare yourself so you can predict what’s around the corner before getting there.”

Founded in 1985, the John Molson Executive MBA program — the first of its kind in Quebec — was created for executives, entrepreneurs and professionals with considerable business experience, to develop into leaders who flourish in times of ambiguity and fast-paced change. The program is designed to broaden individuals’ knowledge to develop a more integrated or bigger-picture perspective typically associated with senior leadership.