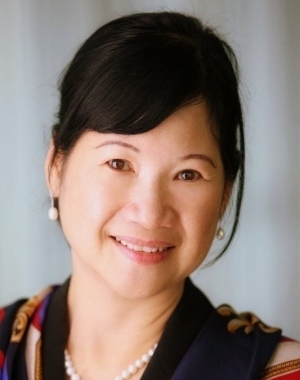 “I knew I always wanted an MBA to complement my engineering education,” says Thi Hien Nguyen-Khac, EMBA 87. “I had an insatiable need to learn new things.” | Photo: Alain Gagnon

Thi Hien Nguyen-Khac, EMBA 87, isn’t someone to sit still. After leaving her native Vietnam in search of educational opportunities beyond the world’s largest ocean, she went on to pave a career marked by many firsts. Among them was graduating from Concordia’s first John Molson Executive MBA (EMBA) class — and the first in Quebec — a program celebrating its 35th anniversary.

Nguyen-Khac’s restless curiosity and strong sense of determination have taken her far, both in terms of geography and careers.

“My story is that of an engineer becoming an equity portfolio manager, working for very large institutions and living an ex-pat life — because I got my credentials in finance through the EMBA,” she says.

Born Thi Hien Ho in Hanoi in 1950, Nguyen-Khac moved to Saigon in 1954, then to Canada in 1968, at the height of the Vietnam War. Student visa in hand, she enrolled in chemical engineering at École Polytechnique, where she met her husband-to-be. Graduating in 1973, the year before she married, she moved to McGill to pursue her master’s and graduated in 1975, the same year she gave birth to twin daughters.

The fall of South Vietnam persuaded her to remain in Canada and caused her to abandon PhD studies, so she could work to support her family.

Nguyen-Khac joined Petrofina/Petro-Canada in 1975 as the first female process engineer at its east end Montreal refinery, launching a 15-year career in engineering and marketing. “As the only female engineer in a very male-dominated workplace, I had to be very determined to advance,” she says.

While at Petro-Canada, she was accepted into Concordia’s inaugural EMBA class in 1985.

“I knew I always wanted an MBA to complement my engineering education,” Nguyen-Khac says. “I had an insatiable need to learn new things.” But with a full-time job and a young family, she could not envisage taking the regular MBA classes in the evening, and found the two-days-per-week EMBA schedule was a perfect fit.

What was it like to be part of that first cohort? “I felt honoured to be part of the first EMBA class,” Nguyen-Khac says. “It was a small class and each student had been chosen from hundreds of applicants. My classmates were successful businesspeople and entrepreneurs. They had diverse sets of skills, expertise and backgrounds.

“The professors had high credentials and were both practitioners and academicians. But I learned as much from my classmates as I did from the professors. We all kept in contact for many years and I am still in touch with a few of them, even though most of us are retired.”

Nguyen-Khac was impressed by the program’s strategic and human focus. “The most important thing I learned was that in any situation, we should look at all aspects and issues — not only financial, technical and so on — with long-term strategy and human aspects being very important.

“The strategic positioning, the integrity of managers, the well-being of employees, the community — these are all key in the long-term success of a business.”

‘I could not have asked for a better career’

When she graduated from the EMBA program in 1987, Nguyen-Khac was being groomed for an executive position at Petro-Canada’s Calgary head office, but she decided not to make the move for family reasons and because she felt she’d like a smaller, more entrepreneurial firm.

In 1990, she joined Ecofix, a waste management firm in the treatment of contaminated soil, as vice-president of technology and development. It was short-lived, and she realized she found more fulfilment in a larger, more structured outfit. The Quebec government’s Société Québécoise d’Initiatives Pétrolières came calling, and she spent four years at the energy-development agency as director of technology and development.

Nguyen-Khac then pulled a major career shift and moved into the investment world, joining the Caisse de Dépôt et Placement du Québec in 1995 as an oil analyst, and rapidly moving beyond the job’s entry-level status. Eleven years later, it was on to Nordea, northern Europe’s largest financial services group, where she worked in Copenhagen for two years before shifting to the Middle East as deputy head of Asia equity with Abu Dhabi’s ADIA investment authority.

“I finally found a rewarding career that utilized my talents fully,” Nguyen-Khac says. “I learned a lot, travelled the world and met interesting people. I could not have asked for a better career.”

Her advice to students, both current and future: “Pursue your dream, whatever it is. The EMBA is an excellent way to improve your business skills. You will learn pragmatic solutions and be more confident to tackle challenges in a changing world,” she says.

“It can open up exciting new opportunities and make all the difference in your career. And you’ll develop a network of friends and connections that will last a lifetime.”

Founded in 1985, the John Molson Executive MBA program — the first of its kind in Québec — was created for executives, entrepreneurs and professionals with considerable business experience, to develop into leaders who flourish in times of ambiguity and fast-paced change. The program is designed to broaden individuals’ knowledge to develop a more integrated or bigger-picture perspective typically associated with senior leadership.