An animator in both senses 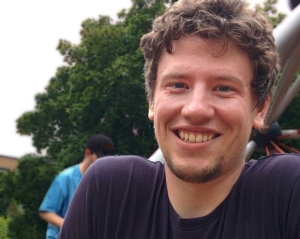 Eric Bent has been with Montreal studio Spectrum Productions since May 2014.

Originally from Aylmer, Que., Bent has been drawing and painting since childhood and has a taste for “weirder, quirky, off-kilter” material. A self-portrait film he had made for a Concordia assignment screened at the Regarding Disability film festival, which Bent had helped organize.

“The night’s screening was about autism and animation,” says Bent. “We screened a bunch of stuff from people on the autism spectrum, including my own.”

In the audience were Liam O’Rourke and Dan Tenveen, founding partners of Montreal studio Spectrum Productions, which provides opportunities for kids and young adults with autism spectrum disorder to make their own films.

“We exchanged numbers and now, here I am,” says Bent, who started as a volunteer in 2013 and was soon hired as a full-time staff member. “It’s a super-positive environment and we make lots of weird and wonderful stuff that’s likely to blow you away.”

Rather than focusing on someone’s disorder, Spectrum’s various extra-curricular programs and clubs — which Bent says have reached participants aged seven to 27 — teach them the skills to express their ideas and become actively engaged in making movies. All this happens in a supportive, social and professional milieu.

This is where Bent comes in. “The term I use when I tell people what I do is ‘animator,’ in both senses. I’m the film animation person, and also animator in the sense of acting as a supervisor and teacher.”

He teaches a wide variety of topics in different ways, depending on the student. His own learning curve involved figuring out how to keep people engaged, he says, “because some of the deeper aspects of film editing can be a bit more tedious and difficult for some of our participants.”

Bent is himself on the higher-functioning end of the spectrum, which offers him additional insight on how to work people within that disorder. Yet it is by no means the defining characteristic of Bent or that of the young filmmakers he works with.

“One of the mandates behind the studio is denouncing the stereotypes around autism in general,” Bent explains. “There is a great deal of one-on-one support at first, though some of the more talented participants learn to work independently rather quickly.”

Ultimately, he adds, “We’re interested in these really quirky ideas they have. The dream is to get these guys work in their professional field.”

In addition to realizing his own dream of being an artist and animator, Bent feels gratification teaching what he loves and seeing the work his students achieve. His job at Spectrum also inspires his own artwork, as he learns new skills and has access to equipment that can support his own creative film projects.

Bent looks fondly at his time at Concordia. “I cherish the years I was there,” he says.

“I associate it with my first years of living independently, and being in a more supportive environment as a person and as an artist than anywhere else I had been. It was just generally very exciting.”